Warning: This post contains spoilers from The Chi‘s Season 4 premiere.

As the first few moments of The Chi‘s Season 4 premiere remind us: A lot can happen in a month.

The opening of the Showtime drama Sunday showed various characters in the middle of big moments. Kevin, dressed in a tuxedo, walked in on Jake and Jemma kissing. Kiesha labored to give birth in a tub. And Mayor Otis “Douda” Perry was shot on the roof of a building in which a fancy event was being held.

Then, as a title card informed us, the action hopped back a month and several events unfolded.

* Kevin told Jemma he loved her.

* We learned that Dom and Darnell are dating, and Emmett is extremely worried that Tiffany will find out he and Dom had slept together. (His restaurant is doing well, though!)

* Kiesha met with potential adoptive parents for her child, and ultimately decided against them after the wife admitted that they were getting a divorce and she was planning to raise the baby on her own.

* After arriving to play basketball at a public court, another kid picked a fight with Jake. Things escalated, and when nearby cops stepped in and demanded to see Jake’s ID, he refused. The officers pushed Jake to the ground and beat him, and when Kevin tried to step in and show them his ID card, one cop pulled a gun on him. Jake was taken away in handcuffs and wound up at a hospital. Maesha filmed the entire incident with her phone and later put the footage online.

* At the hospital, Trig was incensed to find his brother handcuffed to the bed. And when Douda arrived, he, too was incredibly angry — but added that he can’t stop the Chicago police from being crooked. “Ain’t that your job?!” Trig yelled. Douda promised to take care of things. And later, when Kevin showed up, Jake made it clear that he wasn’t happy with how his friend had handled himself during the attack.

* Douda flirted with Tracy a whole lot… and his wife certainly took note.

* At the end of the episode, while Imani stood as a lookout, Trig beat up the cop who hurt Jake.

We hopped on the phone with showrunner Justin Hillian to talk about all things Chi… including when we’re going to catch up to that flashforward. Read on for his answers.

TVLINE | After the past year, I assumed there was no way The Chi wasn’t going to address police brutality in some way. Can you talk to me a little bit about how you decided to come at it from the angle of having Jake be the victim of an attack?
We tried to think about what was unique about our show, and we have a crooked Black mayor. [Laughs] So we really wanted to see the ways in which pressure could be applied to him and the community. We wanted to make it Jake because that was the most sort of personal connection to our mayor, and there was going to be no way that he could ignore this, and he was going to have to decide whether he was going to start trying to do the right thing or if he was going to sort of stay the shady person that he’s been. And that’s kind of why we start with this question: gangster or mayor? He’s got to choose and kind of decide who he wants to be.

TVLINE | The media is starting to close in on Douda’s misdeeds, and it doesn’t seem to change his behavior all that much.
No… It’s like this guy who’s going to come in, and he doesn’t know what he’s doing, and he is overconfident, and he is going to make mistakes, and he’s not going to admit to them. And not only what does that do politically, but how does that filter down to our characters? … That’s mainly what this season is about.

TVLINE | There’s a rift starting between Jake and Kevin in the aftermath of the attack. What can you tell us about how those two are going to relate to each other as the season progresses?
We really like exploring people’s perceptions of these young men. It’s often the question of: When do young Black men stop being cute and start being threats? There’s always been this perception that Jake was the bad kid, and Kevin’s the good kid. We don’t believe that there are good or bad kids… They’re going to handle [the event] differently, and it’s going to affect their circumstances and their relationship as their circumstances change. It starts to tug at their versions of themselves they see when they look in the mirror versus what people see when they look at them.

TVLINE | Trig has made — and makes, in this episode — some decisions that probably aren’t in anyone’s best interest in the long run. And it’s all out of a deep love for his brother. Tell me a little bit about Trig and Imani at the start of this season.
He is frustrated because he’s made this deal with the devil, and his woman told him it was a bad idea, but you know. [Laughs]

TVLINE | As we often do. Yeah. I got it.
Yeah. And as is often the case, she was right. [Laughs] And he’s dealing with the consequences of that, and the frustration… So many poor decisions are based around economics, and if he had the means to provide for Jake’s education, he wouldn’t have made that decision. So we wanted to show how that lack of means has forced him to compromise himself, but it’s all for the right reasons.

It’s like, do the ends justify the means? And also, when you have to lean on this other parental figure to be a proper parental figure for your brother, what does that do to your sense of self and of masculinity and being able to provide? 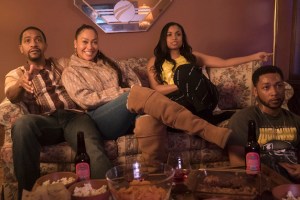 TVLINE | Emmett’s freakout about whether Tiff will find out he slept with Dom had me laughing. His restaurant is a success, but is this the season he might be able to get out of his own way?
The first three seasons, he was scrambling. He’s got these kids. He doesn’t have a job. He’s trying to provide. He’s doing all these random hustles, from selling hair to selling sneakers. And then he stumbles upon this business, and now, it’s successful. So, he doesn’t have that scramble anymore, and then, it’s like, okay. Now the financial pressure is off.

Now all of the issues that you thought were related to money, you see that you still have these issues. So, now you have to deal with your life and your relationships and your children and growing up. We wanted to remove the financial obstacles where he could stop hustling and then have to really look at his circumstances and realize that there’s only so much that money can solve. 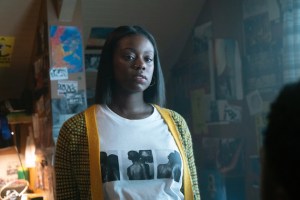 TVLINE | I was worried that Kiesha might still going to be in a very dark place, but she seems like she’s handling things in a really healthy way. Do you think that’s an accurate read?
Yeah. As best as she can. We explored the darkness last season. And we ended that season with her running with that look of determination on purpose. Because she is a fighter, and she is strong. But we really wanted to explore her navigating this next phase of life. It’s like: OK. It’s not like this thing happened and it’s over. It’s like, now how do we move forward? She has good days, and she has bad days. And people still remember her from that thing. And watching her try to move through life and pick up the pieces and move forward — we really wanted to explore that.

TVLINE | I loved the conversation she has with Kevin, where she’s like, “Do not do what I do,” which I thought was incredibly self-aware.
Yeah. Well, she’s had a lot of time by herself to contemplate. [Laughs]

TVLINE | The flashforward that starts off the episode: When will we catch up to it?
Episode 5. Everything that you saw in that moment, it happens in Episode 5, and then we move forward.

Now it’s your turn. Grade the premiere via the poll below, then hit the comments with your theories on who shot Douda!