The NCIS: Los Angeles team will look significantly different this fall, given the departure of two long-running characters in the high-octane CBS drama’s Season 12 finale.

During the season ender, Eric Beale (played by Barrett Foa), the team’s onetime tech operator-turned-rising tech titan, revealed to his partner, intelligence analyst Nell Jones (Renée Felice Smith), that he has received funding for the international HQ of his Kaleidoscope-based tech firm, to be based out of… Tokyo. What’s more, he had successfully pitched his board on Nell as his No. 1 — and by episode’s end, Nell decided to not sign on as the “new Hetty”/Operations Manager, but join Eric on this adventure. And as part of an atypically shiny-happy NCIS: LA finale montage, the two literally rode off into the sunset (in Eric’s ridiculously lavish new sports car). 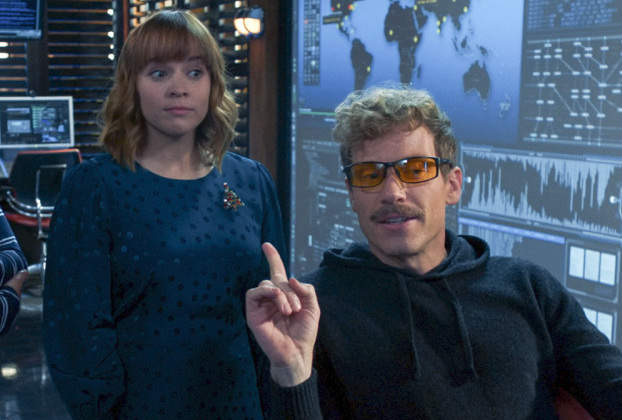 Foa has been with NCIS: LA since the pilot, promoted to series regular midway through Season 1. In Season 11, the stage vet took a brief leave of absence to pursue another professional opportunity, and in Season 12 he/Eric have appeared intermittently.

Smith joined the cast early into Season 2, and like Foa, was absent from batches of episodes in both Seasons 11 and 12.

Showrunner R. Scott Gemmill spoke with TVLine exclusively about the decision to write out the two characters in one fell swoop.

“Both Renée and Barrett have been on the show a long time, and they’re both very ambitious individuals who have projects that they want to do on their own — and we’ve been giving them time off to do so,” Gemmill said. “It seemed like a natural time to let them go off and do some other things, and give [their characters] what is a happy, hopefully, ending.”

This is not, however, necessarily the very end for either Eric or Nell. “There’s a little loophole in there, when Nell says she’s going to be alone in Tokyo with Eric, and she gives it ‘six weeks’ before she’s back,” Gemmill noted. “So, we’ll see what happens.”

Viewers may be most surprised that Nell turned down MIA Hetty’s job, leaving the position quite vacated going into Season 13.

“This seemed like a good time [to write her out], because you probably expected Nell to take Hetty’s job that she’s being groomed for,” said Gemmill. “But it’s a good thing, in some ways, to have that little bit of unpredictability to the show. That keeps it fresh and honest. But also, like I said, we keep in loopholes so that we can bring people back.”

ALSO ON TVLINE: Our exclusive exit interviews with both Foa (read it now) and Smith (read it now), who reflect on their decade-plus runs — and shed light on that close, on-screen shave! Plus, who will now be Operations Manager?