Has Kristen Bouchard herself turned… Evil? That answer is (hopefully) coming soon, now that the horror-drama’s lonnnng-awaited second season is set to premiere Sunday, June 20 at its new home of Paramount+.

Evil Arrives on Netflix: 13 Reasons Not to Sleep on the Spooky Serial 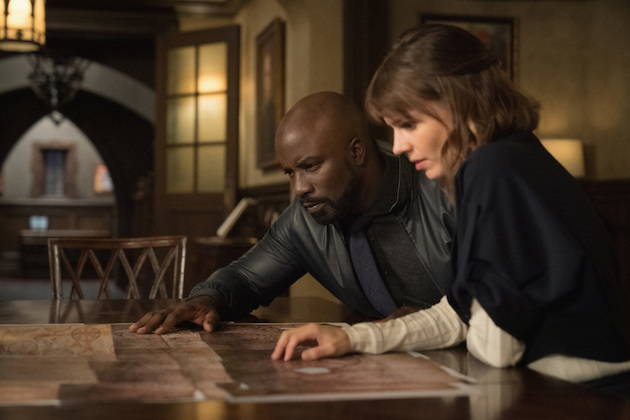 Comprised of 13 episodes dropping weekly every Sunday,  Season 2 of the formerly CBS series “brings evil closer to home” as “Kristen (played by Katja Herbers) struggles with her darker nature after killing a man, David (Mike Colter) suffers temptation as he gets closer to his ordination, and Ben (Aasif Mandvi) is visited by night terrors that prey on his greatest fears,” the official description tells us.

Along with the premiere news, the streamer debuted a hair-raising trailer (embedded above) that’s jam-packed with demonic atrocities, exorcisms and (of course!) that pesky, twisted Leland Townsend (Michael Emerson).

In the clip (set to the tune of RIAYA’s haunting cover of Björk’s “Hunter”), we’re shown a smorgasbord of horrors including the goat-like creature with its scythe, a threatening message scribbled in drippy blood, cross-shaped burn marks on Kristen’s body, and so much more, building to a terrifying climax.

Debuting on CBS in September 2019, Evil earned a swift renewal for Season 2 a month later. And yet, due in large part to the pandemic, no new episodes have aired since Season 1 wrapped up in January 2020, nearly a year-and-a-half ago. (Creators and executive producers Robert and Michelle King recently dropped fresh Season 2 hints to TVLine’s Kim Roots; click here to get the scoop.)

Excited to see more of Kristen and David? Press PLAY on the clip above to get a tease of what’s in store, then hit the Comments.