The two-time Grammy winner suffered a wardrobe malfunction during his first song, the provocative “MONTERO (Call Me By Your Name).” The moment came at the 2:20 mark (see above), when the rapper worked a stripper pole and split his pants wide open. He immediately grabbed his crotch and looked directly at the camera.

Lil Nas X kept his hand firmly in place for the remainder of the performance, then took to Twitter to acknowledge the embarrassing snafu.

“NOT MY PANTS RIPPED ON LIVE ON TV,” he tweeted in all caps. “OMFG NO… I wanted to do my pole routine so bad this what I get lmaoo.”

The rapper proceeded to laugh off the moment — and even retweeted several viewers who made light of it. 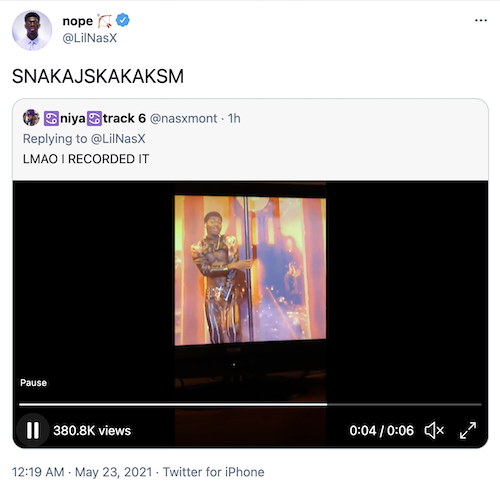 Lil Nas X eventually returned to the stage for a second performance, “Sun Goes Down,” which you can watch here.

SNL‘s Season 46 finale was hosted by Queen’s Gambit breakout Anya Taylor-Joy, whose hit Netflix series was parodied during the monologue. The episode opened with surprise guest star Chris Rock, who joined the cast to reflect on the most surreal year in the late-night sketch series’ history (watch here).

What did you think of Lil Nas X’s performances during the SNL finale? Did you immediately notice the wardrobe malfunction? Sound off below.