We knew that he was gone, and we knew how he left. Yet even after Thursday’s episode of Grey’s Anatomy, the last one for Jesse Williams, we still had a whole lot of questions. Luckily, the actor was willing to get on the horn with TVLine to answer them, discussing everything from his exit after 12 seasons as Jackson Avery to that implied happy ending for “Japril.”

TVLINE | First things first, did you approach showrunner Krista Vernoff about leaving, or did she approach you… ?
It was really a collective [thing]. It didn’t start with the decision, it ended with what makes sense for the character’s journey. We were figuring out where this guy is going, and something kept saying that he can’t stay here. He’s been on these walkabouts and a personal journey, and he hasn’t really been able to maintain a personal relationship since April… He’s really unsettled about his father, and we don’t often get to see a straight man on camera be vulnerable and acknowledge that they feel incomplete because of damage that was done to them by a parent and that they can acknowledge that. Not only that, but they can go try and do something about it. So they sent him off trying to fill a gap and find completeness, and in that process, he’s learning more about the world outside. He’s like, “Jesus, I don’t know anything about out there! I’ve been in an ivory tower this whole time living in bubble-wrap. Let me rip this off and see how it feels.” Jackson has always been professional, but what about something that he’s passionate about? [Taking over his mother’s foundation] kind of felt like a natural progression, and I care much more about what’s true to the character than what’s cosmetically complementary.

TVLINE | Some viewers have suggested that there could be a great spinoff in following Jackson, April and Koracick to Boston. Would that be of any interest to you?
We’ll see. I’m not entirely sure. There is certainly a part of me that is compelled to go out into the wilderness as well [as Jackson] and do something different and new, so I’m very excited to do that. That said, I’m really proud of the work and the character I’ve created here in this world, and I get [fans’ interest]. That would be a damn interesting and meaty spinoff with incredibly talented actors in a world that I don’t see reflected in television as far as equity in medicine and the actual role that the medical community plays in impacting our livelihoods, so there is something there. I don’t begrudge it. So we’ll see. We’ll see. 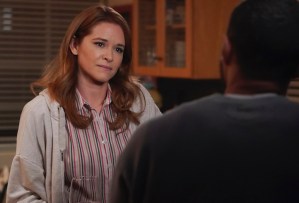 TVLINE | I don’t know if you’re as Team Japril as Sarah Drew is, but were you glad that your reunion episode gave so many hints that Jackson and April would end up back together after all?
Yeah, they are a hell of a couple. They are that popular for a reason. There’s a real chemistry and vulnerability and a willingness to  grow that is really appealing to me as a performer, never mind the fans. So I love the idea that they can go off into the sunset together. And I like that it wasn’t actually named. We didn’t see them embrace or make out. We don’t know that they’re together as a romantic couple, but the audience gets the chance to finish the sentence, so to speak, and fantasize about the ways in which that could work. It’s a really fitting touch, because so much of the Japril fandom is filling in gaps and showing us why it impacts them so. 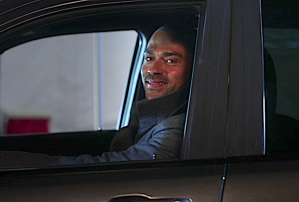 TVLINE | Is there anything that you didn’t get to do as Jackson that you always kind of wished you had?
That’s a good question. I don’t think so. I think the answer would be yes if it wasn’t for this season. Getting to confront my mom about overprotectiveness and my father… There’s a real impact in speaking truth to power. It’s a popular phrase for a reason. In this case, my dad held a lot of power over me, without even being present. To be able to tell the truth to him… I think we can all relate in some way to having these unarticulated things we want to express to our parents or an ex-girfriend or boyfriend or a lover. “There’s a thing I wish I could say to you, but I’m not ready to, or I’m not brave enough, or damn it, you don’t know how much this means to me.” And you kinda practice it in the car alone but don’t actually say it. But for Jackson to actually be able to say to his father, “Hey, this really messed me up”… I think it’s really important for men to be able to see men do that. Seeing other people be vulnerable in public is life-changing, and I expect that we will see the impact of these last couple of episodes’ ripple effect over time. I’m already seeing men come out of the woodwork and say how cathartic it is and how much they can relate, particularly for men who haven’t had a father in their life.

TVLINE | As you well know, members of Grey’s Plastics Posse are historically unusually handsome. Who do you see stepping up to replace Jackson?
[Laughs] That’s fun! Too bad the show is just so full of ugly people. Shoot, you’ve got Anthony Hill in there. You have Jake Borelli, who is such an amazing actor, I remember pulling him aside [early on] and saying, “You’re doing fantastic work, just keep it going — you’re inspiring the writers.” Chris Carmack is incredibly talented despite being hideous. Jo picked a new specialty already, but we should have a woman in the Plastics Posse. But hopefully, somebody keeps the light on, because that’s a fun little part of the legacy.