Kaleb had the perfect reaction to seeing Landon’s father pop up in Nigeria in 1464: “Malivore? This bitch is everywhere!”

Determined to prove that she isn’t the villain everyone assumes her to be, Cleo took Kaleb on a magical mystery tour of her past on Thursday’s Legacies, including the painful moment she gave herself over to the mud monster as a child more than 500 years ago. With a front-row seat to the drama, Kaleb learned that Cleo’s grandmother intended to go with Malivore in exchange for sparing their village. But Cleo loved her grandmother too much to let her make that sacrifice, so she stepped up and played the hero.

Ever the skeptic, Alaric reminded Kaleb that Cleo holds sway over him, so they turned to an impartial third party to vet her story: Josie! This time, Cleo recalled her stint as Malivore’s prisoner — he forced her to create monsters, all of whom she inevitably befriended, only for him to consume them. But Cleo knew that Malivore’s insatiable hunger could never be satisfied (“He was hungry and desperate by design,” she said, which feels far too relatable), so she made a vessel for him to live in. Plot twist: It was a vessel she controlled, so she trapped it in a cave and made her great escape.

Alaric believed the story his daughter shared — especially after Josie called him out for his wildly hypocritical behavior as of late — but he needed a few answers from Cleo before exonerating her. Specifically, why did she make a golem of Landon and why did she try to kill Hope? Like most questions asked within the walls of the Salvatore School, Alaric did not like the answer he got: “There is no need for me to inspire the solution that will destroy Malivore,” Cleo said. “You already have it. Hope Mikaelson must die.” (Why is that always the answer?) 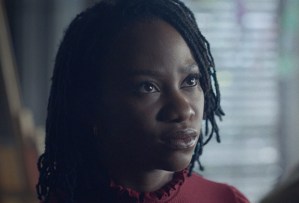 Cleo explained that only the chosen hero capable of defeating Malivore could open the artifact, hence her immediate interest in Hope upon being set free. She then owned up to creating several of the more recent monsters, including the leprechaun and the ferryman, and explained that she only created faux-Landon because Hope refused to let the real one go; she couldn’t risk Hope opening a portal to the prison world and letting Malivore escape. She also recalled her time in Italy with da Vinci, her “first and only love.” She inspired him to create the artifact, which she then infused with her grandmother’s magic.

She stood by her claim that Hope needs to become a full tribrid in order to defeat Malivore, but she also agreed, “That sacrifice is Hope’s to make, as it should have been from the start.” Alaric then gave Cleo an invitation to stay at the school, which she respectfully declined, choosing instead to leave town in search of another way to kill Malivore. And she’s not going alone!

* The real Landon may be back in Hope’s life, but as she discovered this week, he saw some stuff in the prison world. “It was about surviving,” he explained. “So I learned how to fight… and kill.” He demonstrated his newfound fighting abilities on one of his old Mystic Falls High School bullies, then showed off his killing skills when Malivore’s vessel attacked him and Hope in the woods. But teaming up for an old fashioned monster hunt didn’t leave Landon feeling all warm and fuzzy. In fact, upon returning to the school with Hope, he promptly broke up with her! (“I am the son of Malivore. You are the loophole who defeats him. We exist to destroy each other.”) Looks like Cleo will have someone to keep her company on that long bus ride to… wherever she’s going.

* On a lighter romantic note, Finch agreed to enroll at the Salvatore School, but only if Josie would start introducing her as her girlfriend. Josie’s excited response (“Really?!”) was pretty darn adorable.

What’s your take on this week’s dramatic, informative episode? We have a few weeks to reflect on all of these developments (Legacies returns June 10!), so drop a comment with your thoughts below.