Legacies kept St. Patrick’s Day going on Thursday with the first on-record sighting of a leprechaun in Mystic Falls.

And we aren’t talking about the cute, cereal-hoarding variety. No, this leprechaun was much more like the kind that still haunts Jennifer Aniston’s nightmares.

So, what brought this wee troublemaker to the Salvatore School? Why, money of course — more specifically a lack of money, one of the many consequences of Alaric letting things completely fall apart. And he couldn’t have showed up at a better time, as Lizzie’s overambitious plans to raise $91,000 in a single day were proving expectedly fruitless. (Seriously, how much of the school’s dwindling funds were used for those elaborate decorations? That balloon arch alone!) 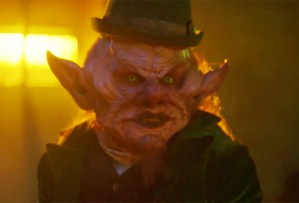 But with the luck of the Irish now on their side, the few remaining students were soon living like Scrooge McDuck, drowning themselves in dollars. And water, in Jed’s case. (But if he wants to hose himself off in celebration of his sudden cash flow, who am I to stop him?)

Enter Hope, who immediately sensed that something was amiss when a total stranger demanded to purchase the bust of Landon that she just finished making. The lady barely even asked any questions about it, one of which could have been “Was this made from your boyfriend’s actual remains?” The answer might have surprised her!

After shutting down Lizzie’s nightmare of a fundraiser, Hope set her sights on the leprechaun, whose existence seemingly affirmed that a Malivore portal was still open somewhere nearby. Cleo tagged along on her hunt, because “what are friends for,” but she kind of muffed things up by accidentally blowing the little guy to pieces. (Silver lining: At least the little guy had enough money stuffed in his belly to save the school!)

“Your obsession with Landon is all-consuming,” Cleo told Hope. “You do not have room in your life for anything else. In the few days we have known each other, you have not asked me a single thing about my life.” Realizing how right Cleo was, Hope came to her senses and started listening. She learned that Cleo hates violence because her sisters were murdered — but unlike Cleo and her sisters, Hope isn’t about to accept that Landon is beyond saving.

Then came the big bombshell: MG confessed to Lizzie that Alyssa didn’t actually destroy the ascendant, and that he’s had it the whole time. She was furious, but her anger paled in comparison to Hope’s. I’ll have to rewind, but I’m pretty sure I saw steam coming out of her ears. And hell hath no fury like a Mikaelson scorned. 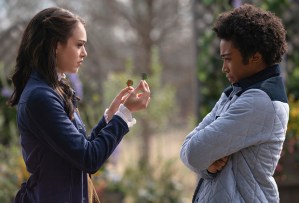 * MG and Josie had an adorable little subplot this week, courtesy of her accidentally ingesting “truth weed.” She admitted to being afraid of starting anything with Finch because “the people I love always leave… or hurt me… or both.” But MG wasn’t about to let his friend wallow in darkness, reminding her, “You can’t let fear stop you from being honest with the people you care about.”

* While we’re taking stock of things that are adorable, Josie and Finch’s budding relationship finally won me over with that final scene. Finch is no pushover, but she also can’t deny what she feels between them. And who doesn’t love a good motorcycle moment? Just ask Stefan and Elena.

* What do we think Ethan meant when he told Josie to “be careful with Finch” because “there’s something different about that one”? Could she be, dare I say, supernatural?