Law & Order: SVU showrunner Warren Leight knows we’ve all been through a lot recently, and that’s why he and the NBC series’ writing staff are going to take pity on us in Season 22’s final hour.

“It has been such a horrible year for so many people,” Leight tells TVLine. “We chose to end on a more hopeful note, rather than having somebody held hostage.” (And if you’re wondering whether Det. Stabler may be involved in that hopeful note… make sure to read to the end of this post.)

Lest you fear the long-running procedural is going soft, however, the two episodes preceding the June 3 season-ender — starting with tonight’s installment at 9/8c — deal with the return of a psychopath fans will remember and a complicated domestic violence case, respectively.  But before we hear what the executive producer has to say about those eps, we had to check in with him about a certain Benson/Stabler scene that was teased in promos for the most recent SVU/Organized Crime crossover… but missing from the actual episodes.

DINER? I BARELY KNOW ‘ER! | Promos for the crossover (and a TVLine video with Organized Crime stars Chris Meloni and Dylan McDermott) prominently featured shots of Mariska Hargitay’s Olivia Benson and Meloni’s Elliot Stabler meeting up at a diner — perhaps to talk about all of the feelings stirred up by Stabler’s wife’s death and its aftermath. But when the episodes aired, that scene was missing. What gives?

The reason behind the cut, Leight says, is “so mundane:” Essentially, scheduling delays on Organized Crime meant that SVU and its spinoff became out of sync. “So we had written our diner scene two episodes before [OC] shot the episode that preceded our diner-scene episode.” And thanks to changes along the writing-and-editing process, “the diner scene was filled with references to things that hadn’t happened.” So instead, a similar exchange between Liv and El at the morgue, simply because the diner scene “didn’t make sense once we’d seen the episode that preceded it.” 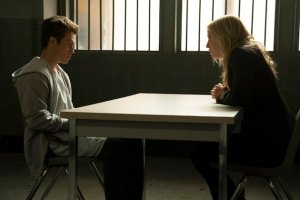 THEY GROW UP SO FAST | Tonight’s episode features the return of Henry Mesner, the terrifying presence introduced in Season 14’s “Born Psychopath” and played by Ethan Cutkosky (Shameless), who reprises the role he originated as a child. Henry is now an adult and angling for release from the facility where he’s been living for the past eight years; Rollins will become deeply involved in figuring out whether that’s a good idea or not. “I just wanted to see: Where is this kid? And we had done some research, and it turns out one of the problems — and you know, not every kid psychopath stays and becomes an adult one. But if they’re put in institutions, sometimes the process of group therapy and psychotherapy, instead of straightening them out, teaches them how to behave as if they’re normal,” Leight adds. “It’s graduate school for some psychopaths” — and “Post-Graduate Psychopath” happens to be the title of the episode.

QUICK TO ASSUME | The May 27 episode centers on a domestic abuse storyline that flips expectations, with the couple in question played by Michael Gladis (Mad Men) and Anna Wood (The Code). “We’ve done a number of domestic violence storylines. People have a hard time wrapping their head around what happens,” Leight says. “Not all domestic violence works along the gender lines you might think it does.” For instance, “When you meet a couple like this, you might be more worried about the woman than the man,” he continues. “And in this particular case, you would be wrong.” 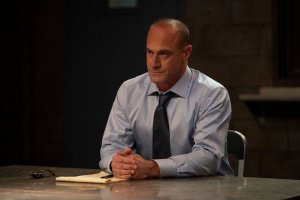 SPEAK NOW | Now, about that uplifting season finale: It’ll involve Fin and Phoebe’s wedding. “It’s always bugged me that everybody in all cop shows comes from, or is in, a dysfunctional relationship or is not in a relationship at all. So we just wanted to have somebody be in a good relationship for once,” Leight says. And if you’re looking for a little crossover action to top off your SVU season? “If there’s an event at the end of our episode, it’s an event that Stabler would have been invited to,” the EP says, laughing.