The moment Handmaid’s Tale viewers have been waiting more than three seasons for arrives this week: June Osborne sets foot on Canadian soil.

I know! I can barely believe it myself, so conditioned have we all become to the pattern of June’s getting soclose to freedom only to be yanked back into Gilead’s clutches. But this time, it looks like it’s going to stick!

Her arrival, of course, doesn’t happen neatly or without peril. And her escape from the misogynist hellscape in which she’s spent the past three seasons is — with no exaggeration — an international incident that could negatively affect the lives of a whole lotta people.

But when June and Luke are hugging on that boat, I honestly don’t care about anything else. So, without further ado, let’s recap “Vows.”

JUNE IS BUSTING OUT ALL OVER | We open to a flashback of Moira and June in the BeforeTimes, drinking mimosas in their apartment on a snowy day. But soon we’re plunged into the present-day aftermath of the bombing, where Moira can’t quite believe she just happened to stumble into her old friend, stumbling around the street and dazed. June ACTUALLY can’t believe that Moira is there, even after Moira flat-out identifies herself. “Moira got out,” June says, pushing past her and calling for Janine.  But Moira manages to talk June into getting checked out by the medical team of the aid group — run by Moira’s girlfriend, Oona — with whom Moira is traveling. 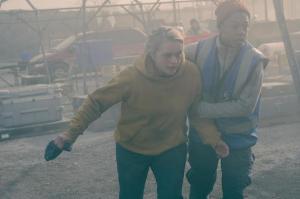 As June sits in the truck, the shock recedes a little, and for the first time June seems to notice who’s sitting next to her. “You shouldn’t be here,” she says, happy and crying and confused all at once. “I f–kin’ found you!” Moira shouts, happy and crying, as well. (Guys, my heart!) And Moira assumes that bringing June to Canada will be as easy as walking her onto Oona’s group’s boat… but it’s definitely not.

The main problem is that Oona’s non-governmental organization has an agreement with Gilead that they won’t harbor refugees; it’s the reason the group is allowed in in the first place. “Gilead finds out we took here, no more missions, no more food, no more medicine for all of these people,” Oona says, gesturing to the crowd that has gathered near the aid site. And Oona won’t budge, as much as it pains her to hurt Moira.

And then things start to happen very quickly. The NGO has to leave. The crowd is pushing at the wire fence, trying to get on the boat. Moira decides to completely disregard what Oona said, so she drops any gentleness and hits June with the hard facts: Janine is probably dead, and they’ve got to run for the boat if they’re going to get out of there. “June, boat, now!” she yells, but June fights her, saying that she won’t leave without Hannah. Moira points out that June’s older daughter is safer without her (“They’re going to hunt you down and kill you, and they’ll kill you in front of her. You want to help her? You leave her the hell behind, and you come with me.”)  and promises that they will fight from Canada. “Everyone who loves you is there,” Moira pleads. “Nichole is there.” That seems to break through, because June says she will leave Gilead for her younger daughter. Then they run, hand-in-hand, and make it to the ship before it pulls away from the dock. Moira stashes June in her cabin, where June — who’s had a DAY — shakes.

ROUGH SEAS | Throughout the episode, we flash back to the time right before June and Luke got married. “Do you really think this is a good idea?” Moira asks, the question taking June aback. “Because he cheats on his wives and he leaves them when they can’t reproduce,” Moira adds — which is true but HARSH — and June points out that her marriage with Luke will be different from his with Annie.

Moira’s words make June understandably angry, but they also sink in: Later, in a conversation with Luke, the bride-to-be brings up Moira’s points, albeit in a much gentler way. He says they’ll be OK, but she reminds him that he really wants children, and she has no idea if she can have them. “What if I’m not who you think I am?” she asks. “Then I’ll just love whoever you turn out to be,” he responds reassuringly. And later on, we see his overjoyed reaction when she tells him that she’s pregnant with Hannah — such a sweet moment in such a heavy episode.

In the present, Oona makes a reference to how they’ll just have to pass the port inspection before leaving Gilead’s waters, and Moira blanches. She didn’t realize that Gilead officials would board the ship and inspect the staff and cargo, and she’s realizing how really bad all of this might get in the next hour or so. So she confesses that she smuggled June aboard; when that information is shared with the crew, a couple of them want to turn her in to avoid trouble. 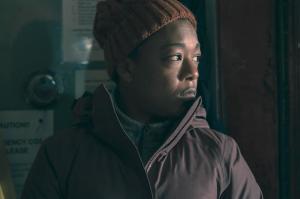 June is thinking along the same lines, and Oona is OK with it. But Moira is like NOPE. She begs her girlfriend to break the rules, and eventually, Oona quietly tells one of her staffers to print June an ID and give her a vest to make her look like a volunteer. Between that meager costume and June’s overall disoriented state, Moira is able to talk the guard into thinking that June is just shell-shocked from being too close to a blast. (I mean, she kinda IS.) And when the Gilead officials finally leave, it looks like everything is going to be OK!

Until June tries to get in a lifeboat and go back to Gilead! “You tricked me into leaving my daughter,” June spits, upset, angry and tired. Ultimately, she starts crying and tells Moira about the last time she saw Hannah. “She didn’t recognize me, she didn’t know who I was. She was scared of me,” June says, getting hysterical. “I was supposed to save her, because I’m her mommy… It is my job to protect her, and I failed.” And then, just in case your heart isn’t already in shards on the ground: “How can I face him? How can I tell him that everything that happened to her is because of me?”

I have never loved Moira more than I do when she firmly counters that that type of thinking is Gilead talking. June pushes back that she knows Luke, and she knows what he can withstand. “How about you find out,” Moira says lovingly, and hugs her. 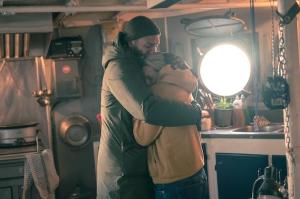 ‘I’M SORRY IT’S JUST ME’ | Finally, Oona’s boat reaches Canada. June takes a moment alone before disembarking, but that’s too long for Luke, who rushes in to see her standing there. “I’m sorry I don’t have her,” she says as she starts crying. “I’m sorry it’s just me.” She repeats that, more and more brokenly, as he pulls her to him and holds her. And it’s a good thing that there are flotation devices aplenty nearby, because I’m serious danger of drowning in my tears. 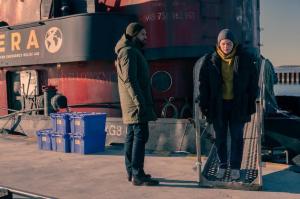 Eventually, they step out onto the deck, and Luke leads June off the vessel. She pauses at the end of the gangway, takes a deep breath, then steps off onto friendly soil.

Now it’s your turn. CAN YOU BELIEVE JUNE ACTUALLY MAKE IT TO CANADA? Sound off in the comments!