Things are not looking well for Burgess on Chicago P.D.

This week’s episode, titled “The Right Things,” ended with a dramatic twist that saw the Intelligence cop attacked by an unknown assailant. While the rest of the team wrapped up an eerily calm arrest in their human trafficking case, Burgess was ambushed and assaulted.

The fallout from the attack will be felt throughout Intelligence as they try to figure out what happened to Burgess, who has gone missing. With emotions running high, the finale will see Ruzek and Atwater, who had a screaming match while transporting a racist cop earlier this season, butt heads. 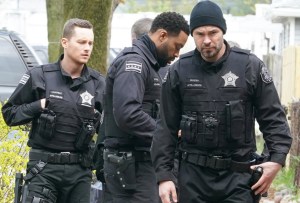 “Since Episode 8, I think Atwater and Ruzek have done their best to continue to learn and understand each other,” LaRoyce Hawkins, who plays Atwater, tells TVLine. “What was interesting about their biracial bromance is that it’s very much rooted in an authentic respect for each other… They love what they do, and they love each other as brothers.”

“That respect and love is challenged, however, by the only person that they both love probably more than themselves,” he adds, referring to Burgess. “So when Burgess finds herself in a jam, and when we don’t know what’s going on with her, sometimes the gloves come off, and emotions get a little too carried away.”

Hawkins hints that the Burgess situation “forces us all to have to figure it out and do our best.” In next week’s finale, we’ll see that “concepts like reform are challenged. The passion that we have for the job, where our hearts and our minds are, are going to get stretched.”

The actor also hopes that the audience learns a lot about themselves and that “we can still reimagine policing in a way that is necessary… I find it unfortunate and interesting that we started the season with the weight of a George Floyd. It doesn’t seem like darkness has let up in any way since [then], since the Trayvon Martin situation, since the Emmet Till situation. There are ancestors that I think that we still have to acknowledge and honor in the way that we tell stories.”

How worried are you for Burgess after that shocking twist? Are you ready for the finale? Let us know your thoughts below!