This week’s Chicago P.D., which was co-written by Ike Smith and Gwen Sigan (and marks Eriq La Salle’s final episode as a director and executive producer for the series) is one that will stay with you.

“Protect and Serve” finds Ruzek and Atwater attempting to arrest Officer Dave Wheelan, a 30-year veteran cop involved in the high-profile shooting of a Black college student. After being ambushed by several unknown assailants during transport, the trio is forced into hiding while Intelligence races to track down the shooters. Tensions rise as Ruzek fights to keep Atwater calm while Wheelan repeatedly insists he did the right thing because his life was in danger, despite the footage proving that to be untrue.

It’s a thought-provoking hour that LaRoyce Hawkins, who plays Atwater on the NBC drama, says is an opportunity to highlight crucial issues in a way that’s palatable for the show’s significantly white audience.

“When Chicago P.D. does an episode like this, it’s very important for us to tell the most authentic story possible because we want everybody to learn and unlearn, at a high level, the right thing,” Hawkins tells TVLine. “I know that my responsibility isn’t just to make Black people proud. It’s also to make Black people look good because we have a white audience that is very invested in our show. The things that they see Atwater do and the way they see Atwater react or respond is essentially going to have a reflection on how they react and respond to things. I think that’s how Chicago P.D. becomes one of those shows that helps us bridge gaps and start conversations that leads to progress and change. I’m grateful to have the opportunity to do that.” 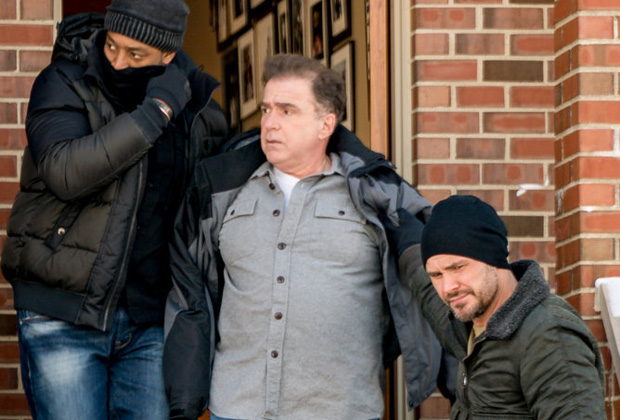 One of the ways in which Chicago P.D. attempts to bridge those gaps is by spotlighting both sides of the uncomfortable conversation on race. In one tense exchange, Atwater pushes back against Ruzek’s insistence that he remain calm and simply ignore Wheelan. But how can Atwater ignore Wheelan’s demoralizing justification for the shooting, which is essentially saying that merely existing while Black is a threat? The pair sit at a standstill when Ruzek points out that he’s nothing like Wheelan and shouldn’t have to answer for the officer’s actions.

It’s a complex situation that acknowledges two things to be true at once: Not all white people are racist; however, racism is an insidious menace to Black lives (e.g., shooting deaths, racial profiling and disproportionate prison sentencing, economic inequality, redlining, etc.) and is an unrelenting reality that white people have the privilege of being able to ignore. So while Ruzek can dismiss Wheelan as one bad apple, it’s just another reminder for Atwater that Black lives are disposable.

According to Hawkins, Atwater and Ruzek’s firm exchange is not far off from the real-life conversations that he and Flueger have off screen.

“We have the same conversations about the acting game that [Ruzek and Atwater] have about being a police officer where he’s like, ‘I can’t really understand, but I’m here to help’ or ‘I didn’t see it the way you saw it,’ [and I] spend as much time as Atwater does helping him understand,” Hawkins shares. “This is why I’m having a conversation with you, because if we’re going to be partners in this game, I need you to have my back, and I need to trust that you’re willing to understand. Oftentimes, the hardest part for a Black officer or a Black artist is being understood.”

Although the episode paints Wheelan as clearly in the wrong, it also spotlights his reasoning for killing the Black teen during a routine traffic stop. Wheelan says he feared for his life after three decades of seeing terrible things while on the job and is rightfully cautious. When Atwater shows him the raw footage of the shooting, Wheelan thinks the video is altered before conceding that he murdered the young man.

“It’s important to say that [Officer Wheelan’s] lack of empathy for the communities he served is what led him to make decisions and react in ways that translated as racism,” Hawkins says. “And the lack of empathy, sometimes, can creep into us in ways that go so unnoticed that our biases and our perspectives are not put in check. What’s unfortunate for Wheelan is that his lack of empathy caught up in a moment that cost somebody else their life.”

It’s not radical to say that people will be conflicted about this episode. “Protect and Serve” doesn’t offer any satisfying answers about policing, but rather raises major questions about what it means to protect and serve the community in today’s climate. Hawkins hopes the episode inspires viewers to think critically about what they’ve watched and engage in nuanced conversations that spark progress.

“I hope that something in the episode teaches us to unlearn what we thought we knew about what this experience can mean, what this story tells, how it affects the people involved,” he explains. “I hope it shines an authentic and fresh perspective on how families are affected, how the officers involved are affected, and how it resonates with people moving forward.”

“When we think about tragedies like Breonna Taylor, for example, or even George Floyd, we oftentimes lean into what the families of those victims must feel like, the darkness that they have to absorb,” he continues. “Sometimes we move so far into that part of it that we forget there’s a darkness that has to be absorbed on the other end of the table as well. I think this episode does a great job of shining a light on both ends in a way that we understand [and] can have a conversation with each other. That helps us do more to unpack or unlearn our perspectives in a safe way [where] everybody is heard.”

Hawkins concludes by emphasizing the importance of seeing both sides sometimes as a way of engaging in meaningful conversations that move the needle forward: “If we were to think about it on the opposite end, I think that ego, that we all have our own opinions, helps us defend the moment, and defending ourselves isn’t as progressive as defining ourselves as far as the conversation is concerned.”