The end of This Is Us‘ fifth season is turning into The Ghosts of Girlfriends Past for Kevin, and with seemingly major effect on ol’ Kev’s plans moving forward.

His surprise Zoom with Zoe in last week’s episode is followed up by an unsuspected call from Sophie in this week’s hour, and the combined result is a case of very icy feet for Kevin. And when that moment of doubt happens to coincide with his bachelor party weekend and some general angst from everyone invited? Saddest. Stag. Party. Ever.

Meanwhile, in California, Madison sees an ex-boyfriend nude and also starts to wonder if she’s making good life choices. Read on for the highlights of the Milo Ventimiglia-directed “Jerry 2.0.”

YOU DON’T KNOW WHAT IT’S LIKE TO BE ME OUT HERE FOR YOU | In a flashback to the late 1990s, Kevin is home from Los Angeles after a failed pilot season. Sophie is excited to have her husband back in the same time zone, but he’s quick to tell Randall and Beth (who may have to contend with her taking an internship in Boston that summer) that maintaining a cross-country, long-distance relationship wasn’t that big of a deal.

The two couples and Kate accompany Rebecca to the cabin, where Kevin’s discussion of his eventual return to Los Angeles eventually makes Sophie really mad. “How is this marriage going to work?” she asks him, point-blank, as everyone else in the cabin tries to make it seem like they’re not hanging on every word. Ultimately, she storms out, leaving everyone else to watch a VHS tape of Jerry Maguire, which is one of Kev’s favorite movies. 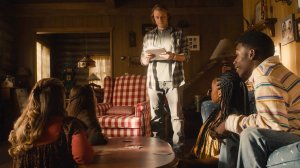 The film so inspires young Kevin that he puts a goldfish in a bag, tells everyone it has manners, says he’s leaving and then in a slightly unhinged manner, starts yelling, “Who’s coming with me? Who’s coming with me?” Just kidding — he writes a mission statement (like Tom Cruise’s character does in the movie) that is all about his future with Sophie. Her heart, it is warmed.

WE LIVE IN A CYNICAL WORLD | In the present, Kevin, Toby, Miguel, Nicky and Randall gather at the cabin to bid adieu to Kevin’s single life. Their big outing — fly fishing — gets curtailed when it starts to rain. So the guys decide to watch one of the movies in the cabin’s video library, and they land on Jerry Maguire.

What the guests don’t know is that Kevin answered a call from an unfamiliar number the day before, and it turned out to be Sophie on the other end of the line. She was planning to leave a voicemail congratulating him on his engagement and fatherhood; when he actually picks up, they’re a little awkward with each other, but not in a bad way. In fact, Kev very much looks like he would like to keep chatting with her, but then Madison interrupts to say the twins have blown out their diapers and she needs his help. Kevin tells Sophie he’ll call her back another time, then looks REAL wistful about the whole exchange. 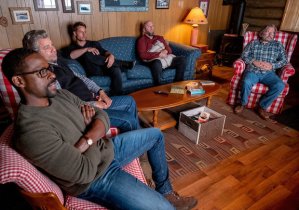 In fact, Kev is so deep in his feelings much later on that he’s unable to shake it off when Uncle Nicky makes a boneheaded observation later that the reason Kevin loves Jerry Maguire — a movie about a successful guy who is wildly unhappy and marries a woman just because it seems like the right thing to do — so much because “it’s practically the story of your life.” Kevin angrily counters that he proposed to Madison because “I’m crazy about her” and calls Nicky’s comments rude and mean.

Later, Kevin finds his old mission statement and tells Randall about Sophie’s call. “How does anyone ever really know who they’re supposed to marry?” he asks. And instead of saying, “Wow, if you’re asking this question this close to the wedding, maybe it’s time to have a come-to-The-Manny conversation with yourself,” Randall hauls his brother outside to sit around the campfire and talk about his feelings.

And Randall encourages everyone else there to do the same, which is how we find out that Toby’s considering putting himself in the running for a job in San Francisco, even though he knows that’s probably not the best idea for his family right now. Then Nicky chimes in about how he gets so ornery about romantic comedies/dramas/what have you because he had one love in his life (Sally, whom we met earlier this season) and “I blew it.” Then he apologizes to Kevin for what he said, which was driven by his own feelings of relationship failure. 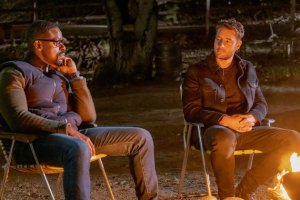 Miguel then expounds on the difference between “written in the stars” romances (like Rebecca and Jack’s) and more mundane, but no less important, romances (like his with Rebecca). “This is the strangest bachelor party in history,” Randall says, and they all laugh.

As the evening goes on, Miguel calls Rebecca and they talk about how, even though her medication seems to be working and her scans show no further deterioration, they’re living in limbo, and it’s tough. Nicky surreptitiously types “Sally Brooks” into an Internet search engine. (Side note: This cannot be the first time he’s done so, can it?!) Toby changes his mind and tells someone on the phone he would “love to be considered” for the San Francisco position.

And Kevin? He deletes Sophie’s new number from his phone. 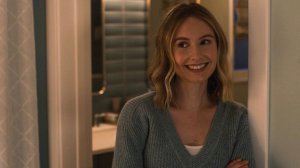 YOU HAD ME AT PROSECCO | Madison’s bachelorette party, meanwhile, is a similarly small affair attended mostly by Pearsons. Kate, Rebecca and Beth are the only guests; there’s a line in the episode about how most of Madison’s female friends live on the East Coast and have young children, but I kind of love how at the end of the hour, Madison owns up to the fact that she doesn’t have many great lady pals. Because seriously: not one of them could’ve made it?!

But I’m getting ahead of myself. The entertainment for the afternoon consists of a nude model (“vaxxed and waxed for your pleasure,” he announces upon arrival) from a company called Picasso and Prosecco. The deal: He pours drinks, then poses in the nude while the women paint him. One small wrinkle: Madison instantly recognizes him, because they dated for a while, then he ghosted her.

After the painting and ogling is done, Kate has Madison answer questions that Kate also asked of Kevin, to see how closely they align (aka The Newylwed Game). It starts off well, but when a videotaped Kevin charms his way through (but does not answer) a question about what life will be like when he and Madison are empty-nesters, it makes Kate flash back to how passionately he spoke about his future with Sophie when he wrote the mission statement. And when the party is done and Kate is helping Mads clean up, she point-blank asks, “Are you happy? Is Kevin what you were looking for? Is he everything you deserve?” 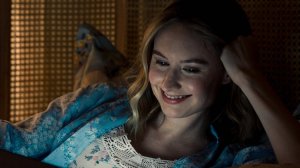 Madison quickly answers that Kevin has “stepped up in ways I never could have imagined” and that she loves him, adding that “nothing will ever get in the way” of her friendship with Kate. Still, as they hug, Kate looks mildly worried.

And in bed that night, it feels like maybe Madison isn’t as sure of her words as she seemed. She’s happy as she rewatches Kevin’s Newlywed Game video, but then she zeroes in on his indecision after the question about their life as empty-nesters, and her expression changes A LOT. Come on, Madison — if you’re having doubts, too, you have the power to stop this! I believe in you!

Yeah, that’s totally not going to happen. See you next week at the wedding!