The following contains spoilers from the May 17 episode of CBS’ The Neighborhood.

The Neighborhood‘s population is growing by one.

During Monday’s Season 3 finale, Gemma found out that she’s pregnant with Baby No. 2. It first became obvious to Tina when her BFF managed to consume a piñata’s worth of beef jerky, and washed it down with an entire tray of birthday cupcakes earmarked for Calvin’s surprise party.

The besties made a beeline for the nearest pharmacy to get Gemma a pregnancy test… or two… or seven, where they ran into Malcolm, Marty and Grover. 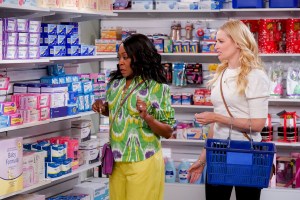 Everyone accompanied Gemma back home, where two separate pregnancy tests came back positive.

Everyone agreed to keep it a secret until Gemma had a chance to surprise Dave. She broke the news to her husband at Calvin’s birthday bash.

“I know it happened faster than we expected, but are you happy?” she asked. “Are you kidding me?” Dave responded. “This is one of the happiest moments of my life.” 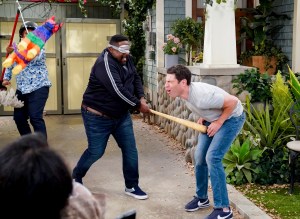 So happy, he was, that he rushed up from his seat to tell everyone and found himself on the receiving end of Calvin’s bat. “I’m OK,” Dave said, hunched over in pain. “But I think I might be done with two kids.”

Earlier in the episode, Calvin and Dave’s fishing trip took an unfortunate turn when Dave accidentally hurled Calvin’s father’s ashes off the Santa Monica Pier. Calvin was furious, but ultimately forgave his best friend. Dad even sent his son a sign — Calvin’s catch of the day was a loose tire, just like the one his father accidentally reeled in years ago — to let him know that he was happy with his final resting place.

CBS previously renewed The Neighborhood for Season 4 (new showrunner TBA), alongside fellow Monday night comedy Bob Hearts Abishola (which was picked up for Season 3). The Eye network will unveil its primetime lineup for the 2021-22 TV season on Wednesday.

What did you think of The Neighborhood‘s Season 3 finale? Grade it via the following poll, then drop a comment with your full review.