When HBO announced last year they were reviving In Treatment, I thought, “Of course.” After all, the drama is perfect for the pandemic era, since it’s a simple set-up of psychologist and patient, just talking in a room — a string of interconnected two-handers, pared down to the barest of dramatic bones. The new revival (debuting Sunday, May 23 at 9/8c) does find plenty of emotional fireworks within that limited format… but it’s a decidedly mixed bag. The series rotates its episodes among four storylines, and some end up being more compelling than others.

In Treatment‘s scheduling is a little unusual: It airs four half-hour episodes a week, two on Sundays and two on Mondays — I’ve seen the first eight — with each episode centering on a single session with a different patient. Uzo Aduba stars as therapist Dr. Brooke Taylor, who conducts sessions from her distractingly gorgeous L.A. home. (This is a continuation of the 2008-10 HBO series; we see that Brooke receives emails from Gabriel Byrne’s Dr. Paul Weston and has photos with him.) Like the original, the episodes here are mostly self-contained single scenes, as Brooke gently probes into her patients’ psychological issues — although, in a fourth storyline, it’s Brooke herself who gets put under the microscope. 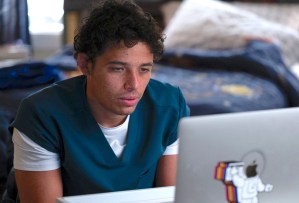 Her first patient is Eladio (Hamilton‘s Anthony Ramos), an in-home nurse caring for the disabled son of an ultra-rich family. He can’t sleep and wants a lithium prescription, but Brooke is reluctant to help him get pills without drilling down to the root of his insomnia. Ramos is a gifted actor — but Eladio’s sessions are conducted via video conferencing, and so their scenes feel oddly disconnected, like they’re just two actors performing monologues at each other. (It’s unclear if Ramos couldn’t film with Aduba due to COVID restrictions, but the digital distance between them badly hampers that storyline.) 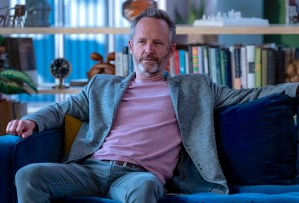 The revival’s most successful episodes are with Colin, played by John Benjamin Hickey (The Big C, Manhattan). He’s an entitled tech executive fresh out of prison for financial crimes and forced into court-mandated therapy with Brooke. He’s charming at first, but there’s a definite darkness underneath; he whines about the burden of being a privileged white man these days, provoking Brooke and getting explosively hostile at times. Their sessions turn into a sparring match, or a bullfight, almost, with Brooke nimbly dodging Colin’s attacks, and the escalating tension brings out the best in both Aduba and Hickey. 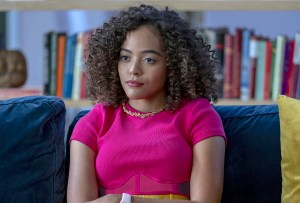 In a third set of episodes, Quintessa Swindell (Trinkets) plays teen patient Laila, brought to Brooke by her grandmother, who’s concerned about the girl’s sexuality. Laila is a lesbian and a self-described sex addict who takes a snotty, sullen approach to therapy. (“Do you want me to, like, do your job for you?” she snipes at one point.) But after some initial bumps, Brooke patiently chips away at her defenses. Plus, in the fourth storyline, Brooke’s friend Rita (Liza Colón-Zayas) gives her a chance to vent her own issues; she’s still mourning her recently deceased father, and her toxic ex Adam (Joel Kinnaman) is slowly but surely easing his way back into her life.

Brooke is not an easy role to pull off, but Aduba was definitely the right choice to play her. Her work as Suzanne on Orange Is the New Black is one of the best TV performances of the past decade; she’s a patient, openhearted actor and slips easily into therapist mode here. And when it’s Brooke’s turn to face her own demons, Aduba reveals a fire and a fresh complexity tucked inside the good doctor’s personality. Really, this show is an actor’s dream, with long speeches and lots of time to explore every last nuance of a character’s persona. The half-hour format works well, too: It concentrates the drama and doesn’t let the navel-gazing linger for too long.

But the therapy sessions are amped up for dramatic purposes here in a way that feels unnatural. Somehow, all of Brooke’s patients end up getting prickly and confrontational with her. (For a more true-to-life portrait of therapy, I highly recommend the Showtime docuseries Couples Therapy.) The Colin episodes are excellent, but the others lag behind to varying degrees, and Brooke’s own self-examination doesn’t quite gel, despite Aduba’s best efforts. The best way to watch this might actually be to wait until it’s all aired and available to stream on HBO Max; that way, you can pick the patients you want to watch… and skip the rest.

THE TVLINE BOTTOM LINE: HBO’s In Treatment revival is an actor’s dream with plenty of emotional fireworks, but some storylines work better than others.