Warning: The following contains spoilers from the May 17 episode of CBS’ Bob Hearts Abishola.

Bob Hearts Abishola‘s central couple was forced to put their wedding on hold when Tayo dropped a bomb on his ex-wife.

During Monday’s episode, Bob and Abishola compared their busy schedules and realized that the perfect date for their wedding was in just three weeks. But in order to proceed, Dele would need to return from Nigeria ahead of schedule — and his father would have to agree to it. Abishola emailed Tayo to discuss Dele’s early return, to which he responded “OK.” But as Dele warned his mother, Tayo was anything but “OK” with it. “You’ll be at my wedding,” she assured her son. He’d stand by Bob and be his best man.

The morning after Bob’s bachelor party, Tayo called Abishola and told her Dele would not be attending the wedding. “I think it would be best if Dele stay in Nigeria with me,” he said — and not just through the summer. “I think he should stay here for the foreseeable future.” Tayo insisted that Dele wanted to stay in Nigeria. “I can get him into the best schools in Lagos,” he argued. “This is where he belongs.”

When she finally got Dele on the phone, Abishola asked if what Tayo said was true. Does he want to stay in Nigeria? Before he could answer, Tayo offered his son a stern look. “Dad says it’s for the best,” Dele answered.

When Tayo got back on the phone, Abishola asserted that had no right to keep Dele. He argued otherwise. “I am his father,” her ex declared. “This is what is best for Dele.” He told her they’d continue their discussion once she calmed down, then hung up.

“What’d he say?” Bob asked. Abishola didn’t answer. She wrapped her arms around her fiancé and wept. Uncle Tunde and Auntie Olu stood in stunned silence. 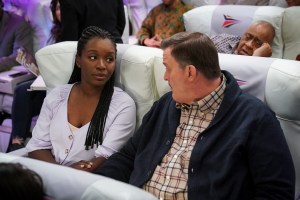 Later that day, Bob, Abishola, Tunde and Olu boarded a flight to Nigeria, determined to retrieve Dele and bring him home.

CBS previously renewed Bob Hearts Abishola for Season 3, alongside fellow Monday night comedy The Neighborhood (which was picked up for Season 4). The Eye network will unveil its primetime lineup for the 2021-22 TV season on Wednesday.

What did you think of Bob Hearts Abishola‘s Season 2 finale? Grade it via the following poll, then drop a comment with your full review.