Raise your hand if you, too, had close to zero idea what was going on for roughly the first half of The Nevers midseason finale.

Of course, that was the point. The opening of Sunday’s episode, “True,” thrust us into a world and a time previously heretofore unexplored, a futuristic hellscape full of darkness, death and a lot of acronyms for which we had no reference. Gone were the Touched, the orphanage, Adair’s prototypes and all of that. Instead, we watched a group of soldiers prowling around some sort of abandoned science station, taking temporary refuge from a war between (as best I can tell) Free Life and Planetary Defense Coalition forces.

Read on for a recap of the hour.

CHAPTER 1: STRIPE | Most of the soldiers are PDC, who’d captured a Free Lifer during a firefight and dragged him inside afterward. But one is a “stripe” — a… nother type of highly specialized soldier, I think? Early on in the hour, we get hints that Everything Is Connected. For starters, the stripe taps her fingers against her thumb just like True does. Second, she gets flashbacks similar to True’s flashforwards. And also, there’s a honking huge Galanthi hanging out in a dome in one of the labs, similar to the one Dr. Hague and his team o’ zombies has been unearthing in 19th-century London.

It seems that there’s a spatial anomaly through which several Galanthi have entered this world, though most of the gigantic creatures have been killed by Free Life forces. From Victorian-era items and “sim strips” left around the building, we are led to believe that maybe everything we’ve witnessed up to this point in the series is just an elaborate simulation. And from recordings that the PDC team finds, we learn that the Galanthi in the ceiling got along really well with the research team… so the Free Lifers killed the team in order to torture it.

As everything continues, it seems like the Free Lifers are afraid that the Galanthi are going to bring more of their kind to take over the world. And the PDC thinks the Galanthi can help with pure water systems and tectonic stabilizers and other stuff that will repair the world. Also: The Galanthi shed spores (like the blue orbs we saw lodge in various Londoners’ bodies) that a PDC medic tells serve as “translators, they activate parts of the mind needed to comprehend Galanthi language and tech.”

Eventually, the Free Lifer winds up shooting at everyone and everything, and hits nearly everyone except the stripe. And this happens as the Galanthi is leaving to go back through the spatial anomaly, apparently ditching this terrible world that has slain all of its friends. Bereft, the stripe goes somewhere quiet and downs two cans of something (?) and dies. But as she does, some (stay with me here because I’m not sure exactly what I’m seeing) blue energy in the shape of Galanthi tentacles wraps around her body, takes the blue orb energy out of her and then goes up into the sky.

CHAPTER 2: MOLLY | And just like that, we’re back in London — prior to the Galanthi’s appearance — watching Molly (aka the woman we know as Amalia True) working in a bakery and dealing with getting fired, getting married to an oblivious lout and going through two miscarriages in short succession. “God makes His plans, so here we are,” she says softly, bearing it all with quiet determination.

When her husband dies of an illness, and True is left to care for her sick mother-in-law on only the meager earnings she makes from delivering bread — AND she learns that the man who fancied her is married and expecting a child — it’s too much. One day, as she’s out on her bread run, she jumps into the river (like we saw in the series premiere) in an attempt to end her life.

The next time we see her, she’s been brought to a psychiatric facility. “You’ll be fine here, Molly,” an attendant tells her. She has a flashforward of her fighting another woman. “Yeah,” she says in a strident voice that has no hint of a British accent, “I might not.” 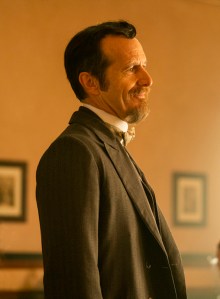 CHAPTER 3: THE MADWOMAN IN THE THAMES | It’s soon clear that the consciousness of the stripe from the start of the episode has somehow, via the blue orb/sport we saw go into Molly’s body while she was under water, been transplanted into True. But even True doesn’t put that together until Sarah — who will become Maladie — starts talking about the “sparks” she saw falling from the dragonfly-shaped ship she thinks is God. True can’t figure out why she’s not dead (“I’ve got no mission,” she weeps, while Sarah comforts her); the fact that she believes Sarah bonds the women.

Dr. Cousens is the facility’s physician; a flashforward of the two of them having sex lets True know he’s going to be part of her life for a while. And when she gets slashed by another patient, Cousens is preparing to stitch her up when his hands start glowing. From his reaction, it seems like it’s the first time it’s happened. He becomes her confidant, and we learn that in her experience, the spores don’t always affect everyone they hit, but they also don’t usually cause random powers to manifest.

She laments that there’s no one to lead all of the people who’ve been affected. And when Cousens suggests that she’d be good for the role, she gets mad (“I did my time! I spent a lifetime fighting”) and then wonders if she can even get much done, given her current body (“Yeah, this doughy little frame, it’s perfect. I’ve got world class t-ts, but I can’t see over a chair.”

Still, she starts working on getting herself in order. She does pushups to get strong. She practices speaking with a British accent. She learns to do her hair and carry herself like a proper lady. Meanwhile, Cousens brings True newspaper articles about Touched people. And when Dr. Hague comes poking around, wanting to know about the lights in the sky, True points him toward Sarah and then counsels Sara to “tell him what you saw. He’s going to help.” Oh dear.

Eventually, Lavinia Bidlow shows up and asks True to run her orphanage. “I’m going to be great,” True tells Cousens one day after they’ve slept together. “I’m going to bring us all harmony and peace.” 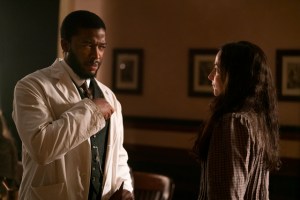 CHAPTER 4: TRUE | Cut to True’s group on the night that Adair’s group went to save Maladie. After a great deal of to-do, Amalia winds up near the Galanthi. “All this time, you’re still in the f—king ceiling,” she quips. She starts to cry as she says that she left Penance behind, “I left my heart to come find you.” And she wonders why the creature hiding. Then she has a flashback to her life as the stripe, then her life as Molly, and she falls backward off the platform.

The next part is a little muddled, but as best I can tell, we see a flashback to when she told Penance about the future, and Penance said, “But we’ll just change it all up.” A voice says, “Did you think you were the only one who hitched a ride?” Then Myrtle — who is dressed in far more modern garb, says, “Oh, Amalia. This is a long time from this little cave. This, I will need you to forget.”

When Amalia hits the ground, she sits up… just in time for Hague’s robo-ghoulies to run in. She fights them off and then hops in the lift, aided by the powers of one of the lobotomized Touched girls nearby. Outside, True reunites with a bloodied and beat-up Augie and Cousens.

And finally, we’re back in the orphanage’s courtyard, with everyone a little worse for wear. True says that even though Adair didn’t save Maladie, she’s glad they went: “It was the right call.” She reports that they didn’t find out who their enemy was, “but you found something out,” Adair notes. Then True says it’s time to tell the girls everything: the future, the Galanthi, the fight that’s coming,” because it’s coming soon. Adair is on board.

And then True, whom we know held her real name as precious information when she was a stripe, tells Adair, “My name is Zephyr. Zephyr Alexis Naveen.” (At least, that’s what I think she says.) Adair says she’s pleased to meet her, and they link arms… just as Adair’s Zepplin takes off. “F–kin’ prototype,” the inventor says.

Now it’s your turn. Grade the midseason finale via the poll below, then hit the Comments to flesh out your thoughts!