Given the tragic twist that befell Tommy’s family in the final moments of last week’s 9-1-1: Lone Star, it shouldn’t be all that surprising to see Gina Torres’ character at the hospital in these first-look photos from Monday’s dramatic follow-up (Fox, 9/8c). Greg Grunberg, however, we were not expecting.

Grunberg has been cast in the dramatic Tommy-centric hour, TVLine has learned exclusively, playing someone she encounters at the hospital while following up on her husband’s emergency.

This casting marks an Alias reunion of sorts for Grunberg and Torres, who appeared together in several episodes of the iconic ABC spy drama — though “together” might be too strong a word.

“I remember running into Greg on the stages a lot, but he and I never actually had any scenes together,” Torres tells TVLine. “I was always slipping and sliding out and and about, trying to kill everybody else. So we were on the same show, but we never shared any real time together, other than behind the scenes. But we have known each other and our paths have been crossing for over 20 years. He’s a sweetheart. I was so grateful because of the depth of all the places we have to go to in this episode that we have each other and that we have that relationship already in place to be able to go to those places.”

Specifics about the episode are being kept under wraps (even the synopsis simply reads “Owen helps Tommy through a personal emergency”), but we do know from the promo that there’s a “potential shooter in the ICU” while Tommy is there for Charles.

Peruse another exclusive photo of Torres and Grunberg below, then drop a comment with your thoughts. Have you recovered from that jaw-dropping Charles twist? 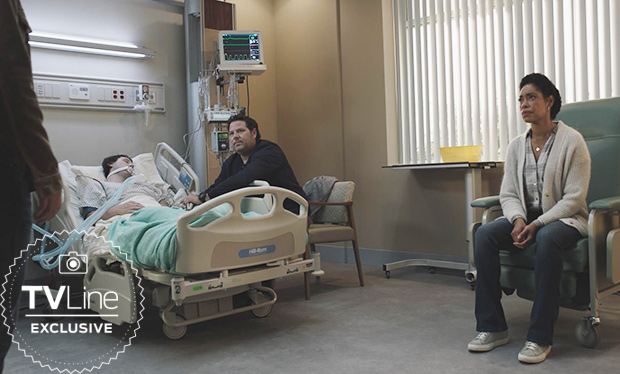