Owen managed to clear his good name on Monday’s 9-1-1: Lone Star, which concluded his two-part saga as a suspected arsonist. Unfortunately, the episode also marked the beginning of a living nightmare for another member of the team. 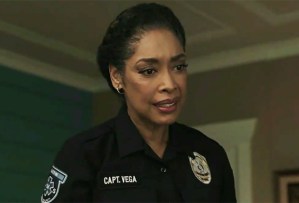 In the final moments of the explosive hour — during which T.K. and Carlos were nearly burned alive to the tune of “Fever” — Tommy returned home to find her husband Charles (played by Derek Webster) unresponsive and bleeding from his eye.

It was an unexpectedly tragic twist, even for a show that relishes yanking the rug out from under its unsuspecting viewers. (Need we remind you about Judd and Grace’s recent car accident?)

The promo for next week’s episode kicks off with Tommy administering CPR while placing a desperate 9-1-1 call. And although Charles appears to make it to the hospital, things only get worse when an apparent shooter gets loose in the ICU.

Do you think Charles will pull through, or is this the beginning of a painful journey for Tommy? Hit PLAY on the promo below for a taste of next week’s episode, then drop a comment with your predictions.