This Friday night in Blue Bloods‘ two-hour season finale, Joe Hill (as scooped long ago by my Inside Line column) resurfaced in a big way. But in doing so, did he reveal himself to be a “black sheep” among the Reagan family? Or just very much his father’s son?

Not long into the finale’s opening hour, we — along with Danny! — realized that while AWOL all these months, Joe in fact had been sent undercover with some gun runners, working on behalf of the ATF. Thing is, while Danny was clearly unawares (and as a result, nearly shot his own nephew when stumbling across a gun sale), Frank and Jamie, who was serving as Joe’s NYPD handler, both knew. And that stirred some understandable friction amongst the men.

Adding to the tension, Joe’s op dovetailed with the brutal murder of an entire family, by a hired gun affiliated with Joe’s “boss,” Kenny. Worse, said hit man, Max Fagan, was brought in to replenish the ranks after a couple of the gun runners got nabbed during Danny and Baez’s earlier takedown. With squirrely Max breathing down the necks of both Joe and his cohort Tyce, Joe wouldnt or couldnt check in with his handlers as needed, though best he could/when he could, he left behind just enough information (via coded messages, signaling to surveillance cameras) for Danny and Jamie, now working together, to stay on his trail.

Frank, meanwhile, repeatedly locked horns with ATF Special Agent Weber (played by ageless ER alum Gloria Reuben), who questioned his intense interest in Joe Hill’s assignment — and who nearly blew a gasket when the commish informed her that Joe would only now report in to Jamie.

The first hour ended with a harrowing scene, where it appeared that anxious Max, after lobbing Joe’s cell out the window, pulled over and set fire to the car with Joe inside; but as it turned out, the charred corpse was in fact Max himself. Joe managed to get the jump on him, after which he and Tyce went on the run. But rather then let Danny and Jamie catch up to him to bring him in, Joe left more breadcrumbs for them to follow, all the way to New Hampshire, where Joe learned a massive munitions sale was to go down, in service of an assault on a courthouse.

As if all of that wasn’t enough, while on the run, a dirty ATF agent found Joe and Tyce at the motel they were holed up at, determined to take out whichever of them was the undercover cop. The agent “deduced” that Tyce was the cop and went to shoot him, but Joe whipped out a hidden side piece and shot out the guy’s knee caps. (How very John Reese!) Joe for some reason announced that he was in fact a cop, leading to a tough talk between him and Tyce, who had some ideas on where the “Big Bang” arms sale was going down. (That was when Joe used a gas station map to signal to a surveillance camera where they were heading.) 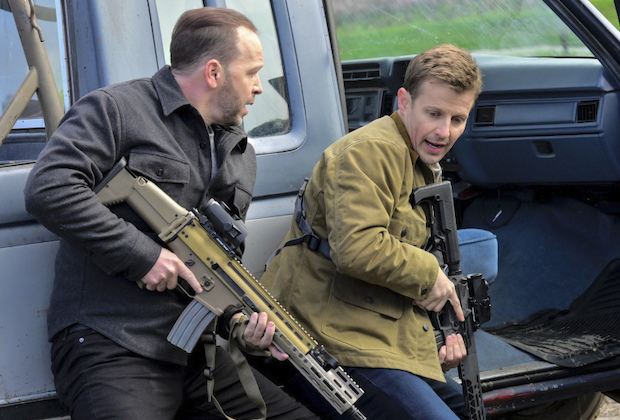 Danny and Jamie caught up to Joe and Tyce, just as Kenny and his goons did. A tense shootout ensued, though luckily the good guys had some of the heavier artillery on hand to hold their own. One by one, Danny, Jamie, Joe and Tyce took out Kenny’s men, though at one point, one almost got the drop on Joe… but Tyce came out guns a-blazing to save his cop friend, though at the sacrifice of his own life, while Joe took a non-fatal bullet to the torso.

In the aftermath, at family dinner (of course), the Reagans reflected on Joe’s perilous undercover gig, and whether his risk-taking ways made him the “new black sheep of the family,” the one who will always have them worrying. Frank, though, contended that any of them, on any given day, can be a black sheep. But Joe is “something special,” being “truly his father’s son. “

“There is no better thing,” Frank assured his grandson.