Who will The Rookie be “teaming” Tim with next? Did Lucifer and Amenadiel disappoint Dad? What’s new with Manifest‘s Death Date Defier? Read on for answers to those questions plus teases from other shows! (Email any new Qs to InsideLine@tvline.com.)

Any scoop on The Rookie‘s Tim Bradford? –Laura
Ahead of the ABC procedural’s return this Sunday, showrunner Alexi Hawley told Inside Line, “We’re starting a fun storyline in a few episodes where Lopez asks Tim to be her ‘Man of Honor’ — to use his take no prisoners style to help her navigate all her family drama, and make sure she gets the wedding she wants. It’s cute, and so on brand with the hard candy shell/soft gooey center that is Bradford.”

Anything on this season’s remaining Grey’s Anatomy episodes? — Al
Well, if you’re hoping that the long-running drama will find a way to perk up even amid the pandemic, you might want to dial back your expectations. “Do I anticipate light and frothy episodes upcoming?” showrunner Krista Vernoff recently mused to TVLine. “I do not.” But that doesn’t mean that the show will be a total bummer. “I would argue that we’re dealing with a lot of darkness, but we’re also dealing with beauty inside that darkness,” the EP said. “Like Jo’s connection to baby Luna… Even though there’s darkness, there’s light inside the darkness. Maggie and Winston are falling in this deep, profound love inside the darkness.” So, in other words, ya take the good, ya take the bad… 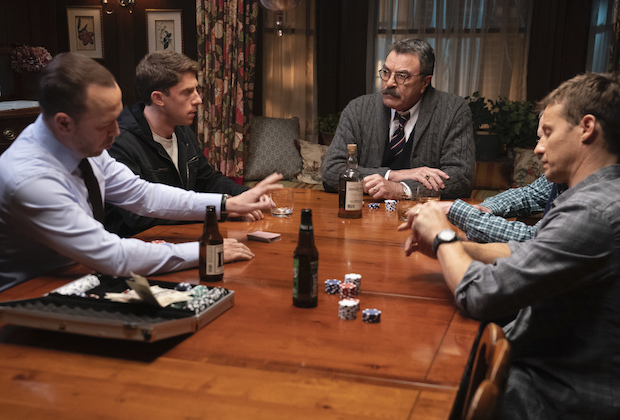 Regarding your answer from several weeks ago, confirming that Blue Bloods‘ Joe Hill (played by Will Hochman) will be back: Do you know when he is expected to return? –Mike
I cannot say exactly when we will see him next, but I can share that this season’s 15th episode will be a big one for the Reagan family’s newish-ly discovered kin.

Any scoop on Supergirl‘s storyline for the first half of the season? –Olivia
That is a good question, and the very final moments of this Tuesday’s long-delayed final season premiere appear to reveal the understandably unspoiled answer. (In my surprise, I may have uttered an expletive.) P.S. Fans of Cat Grant should be pleased with the cover story used to account for Kara’s absence from CatCo’s bustling newsroom during the premiere. 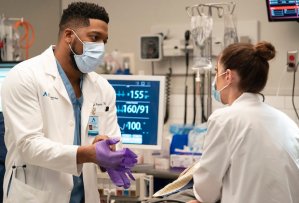 Please give me something on New Amsterdam‘s Dr. Bloom. –Dollaya
Although they have yet to have too much interaction, “you will see a lot more Bloom and Reynolds scenes than in any season prior,” cast member Jocko Sims recently shared with TVLine. “So that’s going to be nice to look forward to.” (Also, don’t forget this tantalizing Bloom tease.)

Any news about New Amsterdam? –Kimberly
Hey, speaking of Bloom… Now that Iggy has opened up to Lauren about his food and body issues, “it’s definitely the beginning of his journey, and not the end,” showrunner David Schulner tells TVLine. “He’ll have his ups and downs, but he’s definitely going to try to confront all of it. But ironically, as someone whose job is to confront the issue head-on, it’s not as easy to practice what you preach.”

Any scoops on Good Trouble, FBI: Most Wanted, #OneChicago or SVU? –Aurora
I choose… Door No. 1! “It’s definitely not over for Alice and Ruby,” Good Trouble‘s Sherry Cola tells TVLine. “You’ll definitely be seeing Ruby again, just in general because she’s part of the comedy diversity showcase, and it’ll be fun to see how Alice navigates that whole dynamic. It’s all juicy, and it’s all fun, I promise that!”

Do you have any scoop on the Painkiller episode of Black Lightning? –Nick
The synopsis for the backdoor spinoff pilot, airing Monday, April 12, reads, “After attempting to bury the darker, devastatingly lethal Painkiller part of his persona, Khalil (played by Jordan Calloway) has distanced himself away from everyone he knows and loves in a new city, Akashic Valley, in order to find peace — but peace never comes easy for men with pasts like Khalil Payne and Painkiller. As his violent, destructive history crashes his idyllic new beginning, Khalil is thrust back into action with a new mission, to bring justice where he once gave out punishment. But to do that, he will first have to deal with and harness his darker side, Painkiller.” 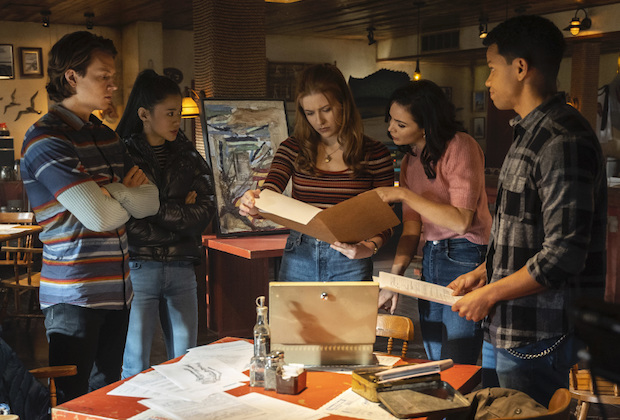 I’ve recently become obsessed with Nancy Drew after bingeing on HBO Max! Any info on the popular fan theory that Ace (no last name) is actually a Hardy Boy, and whether they might explore a Nancy/Ace relationship? –Andie
I relayed your Q to the CW drama’s EPs, and they wrote back, “Ace’s last name will remain a mystery for the foreseeable future! But the unspoken chemistry between Nancy and Ace is something we’ll continue to investigate, for sure.”

How many episodes of the #OneChicago shows will there be this season? –Mindy
Mum is the official word on episode counts, but I can report that Med, Fire and P.D.’s season finales are set to air Wednesday, May 26.

How many episodes of Fox’s America’s Most Wanted reboot were ordered, and is there any news on another season? –Grant
Five, and not yet.

I would love some info on Lucifer Season 5B. Thanks! –Teresa
I spoke with D.B. Woodside, who of course plays Amenadiel and who also recently wrapped his directorial debut with the Netflix series, and he said this of 5B’s opening moments: “When God (played by Dennis Haysbert) comes, a lot of chaos is going to follow. We pick up literally two seconds from where we ended, and Amenadiel is absolutely humiliated that God saw him behaving the way that he was with his brothers because as the oldest, he’s really supposed to be the one that sets the example — and he was not doing that!”

I’m curious, where will Zeke Landon’s storyline go in Manifest Season 3, after surviving the Death Date? –Angelica
I binged the first few episodes (ahead of the Thursday, April 1 premiere), and thus far at least two things are born of Zeke’s death-defying ordeal: 1) He may no longer have callings, but he seems to have acquired a new… talent. And B), what he went through raises big questions for a certain someone who no longer has any callings to follow in order to beat their own Death Date! 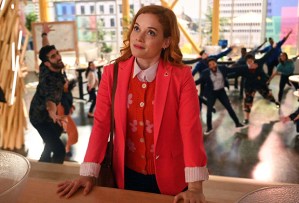 I am a huge fan of Zoey’s Extraordinary Playlist (which resumes Season 2 this Sunday, March 28). Do you have any scoop? –Kay
Zoey’s powers are gonna glitch again! And this time, in the April 11 episode, “It is a surprising, unconventional thing that happens with her powers that’s different than what happened last season,” showrunner Austin Winsberg teases. Speaking of Zoey’s abilities, “I think that later on in the season, we’re going to do a deeper dive into what’s going on with her and the powers,” Winsberg says. “There also might be a moment in time where she enters into therapy to really start talking about this stuff in a real way.”

I am going to miss The Kominsky Method; this could have had a run like Grace & Frankie. Do you know if Nancy Travis or Paul Reiser are returning for any episodes? –MMD
As noted in our reporting on the final season premiere date, yes, Reiser will be back. I’m hearing that Travis, however, was unable to reprise her role as divorcée/acting student Lisa, due to scheduling conflicts with Last Man Standing‘s own farewell run.

If you want the Inside Line on a favorite show, email InsideLine@tvline.com! Questions left in Comments will not be read and may count against your final score. (With additional reporting by Vlada Gelman and Charlie Mason)