Bonnie Plunkett endured a veritable cocktail of intense emotions during Mom‘s series finale – but never once did she consider pouring herself a stiff drink.

In the CBS comedy’s farewell episode, Allison Janney’s alter ego gained a new outlook on her sobriety after a whirlwind 24 hours. First, she met fellow addict Shannon (played by Two and a Half Men‘s Melanie Lynskey) and convinced her to give Alcoholics Anonymous a chance. (It was no coincidence that Shannon’s complicated relationship with drug-addled mom Jolene, played by Mike & Molly‘s Rondi Reed, mirrored that of Christy’s pre-recovery relationship with Bonnie.)

Bonnie also found out that Adam has lung cancer. But rather than spiral out of control, she remained calm and told her husband they’d get through this together. She eventually filled Marjorie, Tammy and Wendy in on Adam’s prognosis, but kept it from Jill for now, as not to ruin her spur-of-the-moment wedding day.

Finally, as this 170-episode journey drew to a close, Bonnie got up and gave an inspiring speech about her eight years in AA, which alluded to her relationships with her daughter Christy — whose absence is explained here — and grandkids Violet and Roscoe:

“This has been quite a day. I think I’ve had every feeling a person can have — some of them great, some of them just awful — and never once thought about drinking or using. But that’s not the miracle. The miracle is I never thought about myself. I was thinking about the people I love, and how I could help them…

When I walked in that door eight years ago, I was so filled with fear, self-loathing, shame… But now, I kinda like me. I kinda love me. I love my husband, I love my daughter, my friends, my grandkids…

I’ve always heard people in meetings say how they’re grateful alcoholics, and I never understood it. It actually kind of pissed me off. But now I get it. My name is Bonnie, and I’m a grateful alcoholic — and if that pisses you off, just keep coming back.”

Below, series co-creator Gemma Baker explains why it was important to throw everything but the kitchen sink at Bonnie, and ruminates on Mom‘s legacy. 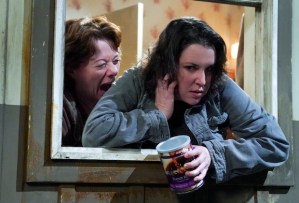 TVLINE | Why was it important for Bonnie to encounter Shannon at this particular moment in her life?
It is definitely unusual to introduce new characters in a series finale, and we knew that going into it. But we thought it was a way of honoring the idea of giving back to a newcomer, and that this continues to go on [even after the show is over]. The relationship between Bonnie and a newcomer also shows so clearly how [Allison Janney]’s character has changed over the years.

TVLINE | Adam’s lung cancer prognosis is hopeful, but his fate is technically left in the air. Why is that?
For this show, it didn’t feel accurate to wrap everything up with a happy ending, or tie it up all in a bow. That’s not life how works. In recovery, people have to face life on life’s terms. Some of the things that our characters are going to face are going to be happy and joyful, and some of them are going to be terrible, but they’re going to be able to face those things together. 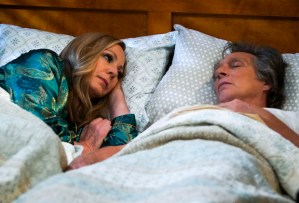 There have been a lot of characters in sobriety, in other shows and films, where the minute there was a crisis, that character relapsed. Showing Bonnie facing something really difficult, and going through it sober with the support of her friends, can give the audience a feeling that no matter what, Bonnie is going to be OK.

TVLINE | I couldn’t help but contrast how Bonnie composed herself here, in a moment of great uncertainty, to how she struggled to compose herself in the wake of Alvin’s death six years ago…
When Alvin died [in Season 2], Bonnie was tempted to drink. There was a scene in a bar with Christy and Bonnie. She actually didn’t drink then, but later that season [she] got into some trouble with medication… The way she handles the situation with Adam definitely is different. With Alvin, she went off by herself, and with Adam, she turns to her friends. So I think it does demonstrate how much she has grown. 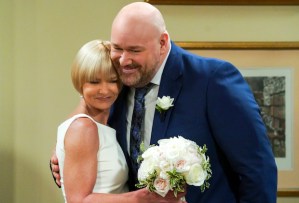 TVLINE | So much of Jill’s journey since we first met her in Season 2 has revolved around her desire to have a family. Of the core characters, was it most important to you that Jill got her happily-ever-after?
We have watched a few attempts by her to start a family that haven’t worked out, and it was important to all of us that she had some success in that department. We all felt that the audience would love knowing that her dream of becoming a mother was going to come true. And also that she found a healthy relationship [with Andy].

TVLINE | Can you talk to me a bit about the importance of Bonnie’s very last share in AA? 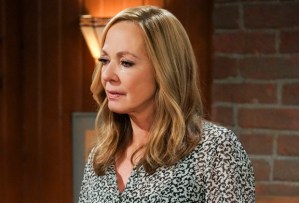 Mom started out with the idea of doing a sitcom that was about hope and redemption. Bonnie’s last share, at the end of the episode, addresses both of those things. That’s not something we were conscious of when we were writing this episode… Chuck [Lorre] joined us to write the finale, which was wonderful, and it was only after we shot the episode that I really could tell that both of those things [were present] — the redemption, [in terms of] how far this character had come, and hope, in that recovery was possible. We know that recovery is possible for [Jolene and Shannon] because we know how far Bonnie and Christy [had come].

TVLINE | Why end the series not with Bonnie’s share, but with Wendy stepping up to the podium and asking, “Who else would like to share?”
We aren’t going to see new stories about these characters, but we wanted this episode to express that the journey continues — and I think that last line tells you that it keeps going… It’s funny, it’s actually the first line and the last line of the episode, which was not intentional, it just happened.

TVLINE | How do you want Mom to be remembered?
I hope Mom is remembered as a funny show that was really about something… It was a show that portrayed recovery as a place where there is light and laughter. And hope. And compassion. And friendships. And that chance at a better life.

What did you think of Mom‘s series finale? Grade it via the following poll, then drop a comment with your full review.