After this week’s episode, four performers are left in The Masked Singer‘s current season… and I’m fairly certain all of them aresuccessful recording artists.

That hypothesis certainly proved correct at the end of Wednesday’s episode, the results of which we’ll get to in a moment. And while I don’t begrudge the competition from including some stellar voices in the mix each season, isn’t it more fun when the people underneath all the fur and feathers aren’t known for their vocal abilities?

Maybe I’m alone on this — make sure to weigh in with your thoughts in the comments. But first, let’s recap the performances: 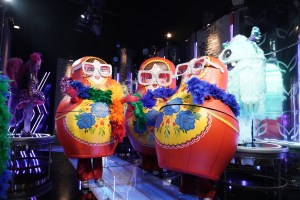 RUSSIAN DOLLS | The Dolls’ line about how their costumes limited their movements to little more than “wrist choreography” made me chuckle. And their take on Elton John’s “I’m Still Standing” was up to their usual very high, tightly harmonized standards. (The boas and glittery glasses were a nice touch, too.) As the season winds down, so do the clues. So this week, the pickings were slim but included: mention of “Weird Al” Yankovic as their friend (“He’s literally given us great direction in our lives”), hints at being a band and “love you to the moon and back.” (My guess: “MMMBop” singers Hanson.)

BLACK SWAN | I did not love the arrangement of Ed Sheeran’s “Thinking Out Loud” that Black Swan sang this week — would’ve really enjoyed hearing her powerful voice on the simple original — but she certainly nailed the vocals. Clues included: Cher is her favorite artist (“We’ve both been a part of iconic fantasy films, and she was a part of my world the first time I shared my voice”), and mention of Black Swan being on Oprah and recently getting a major recognitio. (My guess: “Too Little, Too Late” singer Jojo.) 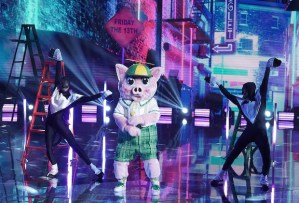 PIGLET | I’m not really sure what Piglet was doing with that operatic intro to Stevie Wonder’s “Superstition,” but, uh, good for him? Clues included: Bruce Willis (“I was speechless when we met. Always cool to meet a fellow action star”), a reference to disastrous public relationships ,and “I drew your picture.” (My guess: 98 Degrees’ Nick Lachey.)

YETI | Yeti may be the most versatile performer left in the mix; he was as at home with Rascal Flatts’ ballad “Bless the Broken Road” has he’s been on any upbeat and/or rap song. Clues included: Diddy (“who I’ve been lucky to work with”) and reference to Yeti’s being a quadruple threat and having worked with a Masked Singer “legend.” (My guess: “Ice Box” singer Omarion.) 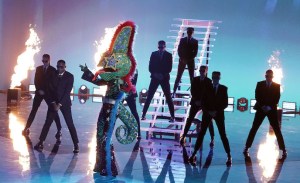 CHAMELEON | “I’m not a singer,” the big lizard tells us at the start of his pre-performance package. But he’s definitely an entertainer… though his cover of Snoop Dogg Ft. Pharell’s “Drop It Like It’s Hot” felt like it took took a minute for him to get fully comfortable. Clues included: a reference to his theater background, a reference to his playing at Madison Square Garden, Jackie Chan and “Any friend of Martha Stewart’s is a friend of mine.” (My guess: “Black and Yellow” rapper Wiz Khalifa.)

THE UNMASKING | Russian Dolls were unmasked, and they were revealed to be Zac, Isaac and Taylor Hanson.