I’ve likely still got some ringing in my ears and dust in my eyes after that episode-ending bombing, so fellow Handmaid’s Tale viewers, please help me confirm what I think I saw at the close of this week’s hour: Is June maybe sorta kinda going to get rescued? And could it really be so perfect that Moira is the person who saves her from Gilead?

Blessed be, it certainly feels like we’re edging ever closer to the type of payoffs the show’s executive producers teaser at the start of the season. So let’s not waste any more time: Here’s what goes down in “Chicago.”

JUNE’S OUTTA HERE | Life with the Windy City rebels isn’t quite what June expected: Janine has become a giggly and willing bed buddy for camp leader Steven, while June isn’t allowed to go along on a trade mission until Janine steps in and speaks on her behalf. While Steven’s gang is on its outing, they run into evidence of another rebel group: the Nighthawks. “They don’t care if they live or die, they just want to kill soldiers,” he tells June. “You’d love them.”

From the empty storefronts and demolished buildings around them — as well as from the elevated train tracks — it looks like we’re in or near Chicago. When a Gilead helicopter circles, Steven’s group ducks into an abandoned storefront to hide. A soldier on foot passes very close to where June is crouched beneath a counter; she hisses at Steven to take the clean shot before the soldiers get away, and he sharply orders her to be quiet. After the threat passes, he explains that killing a small number of soldiers would only lead to more patrols: In short, it wasn’t worth it. “What kind of resistance are you?” she asks, disgusted. “The kind that survives,” he replies.

They eventually make it to the trade market, where — at Janine’s request — June rolls her eyes but allows her fellow handmaid to trade their cloaks for a Cubs baseball cap Janine wants to gift Steven. Eventually, June makes her pitch: She wants to go join the Nighthawks, and she wants Janine to come with her. “We came here to fight,” she reasons. “You came here to fight,” Janine shoots back, adding that it was her choice to have sex with Steven, and “You need to stop trying to save me to make yourself feel better.” When June says she doesn’t want Janine to get hurt, Janine proves you don’t need perfect eyesight to take aim and land a kill shot: “Maybe you should’ve thought about that with Alma and Brianna.” OUCH.

June announces she’s leaving the next day. “Come with me, or stay here and be Ofsteven. It’s your choice,” she says. 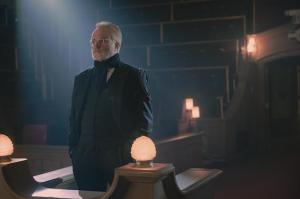 AUNT LYDIA AND HER ‘TESTAMENTS’ | How are things back in Gilead, you ask? Well, Aunt Lydia is doing considerably better than the last time we saw her; she’s healed from her torture and excited about getting right back into being a tool of a misogynist regime! But an aunt named Ruth lets her know that Gilead is putting her out to pasture: “The girls are not your concern anymore,” she says. “Now it is your time to rest.” You might have guessed this, but Aunt. Lydia. Is. Not. Having. That.

Over at Not Compensating In Any Way For Our Genitalia Central, or as you might call it, the Commanders’ Council, Lawrence tries to get the men to agree to a temporary cease fire on the borders of Chicago, California and Texas. Allowing international aid groups to come in fo ra few hours will ease relationships with other countries, he argues, paving the way for Gilead getting the funds it very much needs to win the war. Nick kind of supports him, but the other men don’t, and no one — not even Nick — votes for the motion.

Afterward, Lawrence tells Nick that a cease fire could help June, which gets the young commander thinking. And back at Lawrence’s house, he is visited by Lydia, who blackmails him that she has sources who can prove his involvement in Commander Winslow’s murder. In fact, she has “testaments” to his many abuses of power (which made me giggle with joy after listening to Ann Dowd slay the audiobook version of Margaret Atwood’s Handmaid’s Tale sequel) and to his collaboration for June. And she’ll go to the proper authorities with it, she threatens… “unless you arrange for my immediate reinstatement.”

He agrees, especially after he ascertains that she’s got dirt on a bunch of the other commanders, too — her intel will help him regain his seat at the table. “Let’s fix this country. Let’s make things right again, together,” he tells her. And she agrees, provided that a recovered June will be put in her care “to be disciplined, handled my way.”

And just like that, Aunt Lydia is reinstated and back to her old business of yelling at new handmaids as they walk in the Red Center’s courtyard. Meanwhile, after Nick gets word that two handmaids were in the vicinity of Chicago, he lets Lawrence know that he’ll give him “whatever you need.”

And just like that, the council — which once more includes Lawrence — decides to back the cease fire. Oh, and they want Nick to coordinate a bombing that will take place juuuuuuust moments before the cease fire goes into effect. At Nick’s consternation, another commander notes, “You can’t hunt the roaches while they’re in the walls, son.” Yep, Lawrence was in on this from the beginning, and yep, Nick’s face lets us know that he realizes how truly screwed he is. 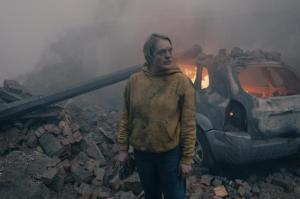 ‘HANDMAIDS ALWAYS WALK IN TWO’ | Back to June. Janine isn’t going to come with her, which makes their goodbye super sad. Janine, in her flibbertigibbet way, says she thinks she may want to have a child with Steven. “Well, that baby is going to be very lucky to have you,” June says, barely able to keep herself from crying. “And those rebels are so lucky to have you,” Janine replies, sunny as ever. They hug, and Janine gives her friend the Cubs hat she planned to give Steven. “Something to remember me by,” she says, smiling.

But June hasn’t gotten very far before Janine finds her and says that she’s changed her mind. “I feel safer when we’re together,” she explains simply. “Handmaids always walk in twos, remember?” 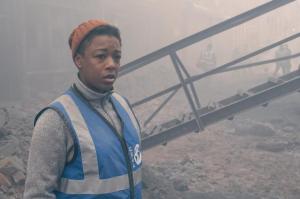 As the women continue on their way, they pass a checkpoint that’s a ghost town. “Where are all the soldiers?” Janine wonders as June realize, based on the huge pile of food that’s just left out in the open, that Gilead’s military presence left in a hurry. “Janine, something’s not right,” June says… just as bombers fly overhead, sacking the city. The women run, bombs falling around them, then everything goes black.

June wakes up, covered in debris and shaken but (it seems) not seriously injured. She hears screaming, sees people helping others. She calls for Janine but can’t find her, dazed and stumbling through the fire and smoke that seems to surround her. All of a sudden, an aide worker steps through the smoke — and it’s MOIRA! June looks at her friend, not seeming to know who she is or what she’s doing there.