Warning: The following contains spoilers from the May 10 episode of ABC’s Good Doctor.

The Good Doctor‘s Shaun and Lea suffered an unimaginable loss on Monday when Lea had a miscarriage, five months into her pregnancy.

The episode picked up the day after Lea’s collapse. Her obstetrician had determined that her scare at the end of Episode 15 was most likely the result of round ligament pain — a common occurrence during pregnancy, as Claire pointed out — but Shaun wasn’t convinced.

“Complications and miscarriage are also normal,” he said. “Lea’s OB did not consider every possibility,” which is why he compiled a list of every negative complication that could impact Lea or Baby Girl Murphy.

Lea was ultimately diagnosed with Type II Vasa Previa, and required surgery to prevent a potential rupture that would kill the baby. With Shaun unable to scrub in due to conflict of interest, Claire took the lead, working alongside Drs. Lim and Allen.  The surgery was a success, but Lea developed a pulmonary embolism In recovery. She’d require an additional procedure to break up the clot and save the fetus. 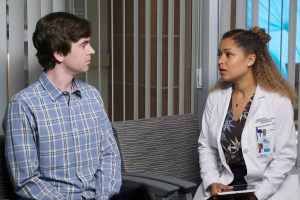 Unfortunately, the baby’s heart rate had slowed, and her lungs weren’t responding to steroids. Lea had also developed a second clot, which had gone undetected in the initial scan. The baby couldn’t be saved. Claire broke the heart-wrenching news to Shaun, who then went to deliver the news to Lea. He said nothing, but he didn’t have to. Lea saw the look on his face and instantly broke into tears.

The following afternoon, Lim visited with Shaun and Lea and assured Lea that nothing she could’ve done would’ve changed the outcome. And while it’s probably the last thing on their minds at the moment, Lim told Lea that she’d be able to conceive in the future, if she and Shaun decided to try again.

Lea ultimately underwent a D&C, a surgical procedure under general anesthesia to remove the unborn child. As the episode drew to a close, she and Shaun returned home and sat on the couch, emotionally drained after a harrowing few days.