So are Nick and Rio brothers or cousins? The answer is a resounding: Who cares?

Despite that minor qualm, there was plenty of drama to savor on Sunday’s Good Girls, as we (finally) dived deep into Rio’s highly teased backstory to learn more about the dynamic between the two men. Also, while Stan and Ruby may have rid themselves of scuzzy Gene at last (hooray!), it’s doubtful the secret service is going away any time soon — especially after a huge development in their case slips through the cracks.

Here’s a full rundown of what happened in “Broken Toys.”

In the very first scene, we see a child, Rio, writing his name atop a drawing. He lives with his Grisham-loving grandmother and also his maybe-brother, maybe-cousin Nick.

“We’ve got a real opportunity here,” Rio tells Beth in the present. He wants her to “keep them busy” — the agents living outside her house in a surveillance van, that is. She’s worried she’ll end up in jail, but Rio says he’s not asking her. “Keep your head up champ,” he replies. “We’re playing the long game here.”

While out for a bike ride, Dean’s friends tell him about “The System,” a new line of men’s skin care they’re hawking. But it’s not a pyramid scheme, it’s a “multi-level opportunity.” You don’t just get a bunch of products, they say. You get a “support network.” (OK, so definitely a pyramid scheme then! Got it.) He tells them he’ll think about it. 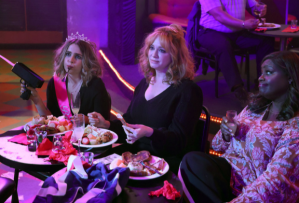 At the club, Stan tells the dancers that Gene doesn’t respect them. Where’s their healthcare and paid sick leave? Despite the fact that he does a bang-up job riling the ladies up, Ruby tells him his attempt to turn the dancers away from Gene is half-cooked and pretty dumb. (My words, not hers.) At least the guy’s thinking!

Watching her kids fight over a toy gives Beth an idea. She tries to explain her thinking to Annie and Ruby, but neither they nor I follow what she’s selling. “So basically, we’re framing someone,” says Annie. The scene cuts before we can find out who.

Nick visits Beth to return a sweater she left at dinner. He’s curious about the deal between Beth and Rio. “You’re just not his typical colleague,” he says. Nick says she should be careful. “Anyone who wears a cardigan shouldn’t be doing what he does.”

Ruby, Annie and Beth make Gene an offer. They try to buy him off with a batch of fake cash, offering him quadruple what Stan owes him, but the slimeball won’t bite. “I just don’t do business with bitches,” he seethes.

Later, Annie has an a-ha moment, and schools the other two on the meaning of Occam’s razor. We cut to the club, where they pretend Annie is a bride-to-be, and dish out dollar bills to all of the strippers. They rip shots while spraying cash out of a toy gun. Dave and Phoebe interrupt the party to ask them what the heck is going on. “You said you wanted to see where it goes,” Beth says. She asks a server for change, swapping a fake bill for real ones, and hands them to Phoebe. “Is that enough?” she asks them.

In a series of flashbacks with a now-teenaged Rio and Nick, Nick works hard as a caddy, while Rio boxes at a gym. When Rio shows up late to the golf course, Nick tells him he’s got his head in the wrong game. Later, Nick catches Rio lifting cash from a wallet in the locker room. Rio uses the stolen money to replace his grandma’s broken stove, but Nick reports Rio anyway. We watch as cops chase the petty thief down.

In the present, Dave and Phoebe bring Gene downtown. The shady boss-man has no clue why he’s being questioned, and admits that the club isn’t his. Once he starts talking, the guy does. not. stop. He starts sweating and panicking, and pretty soon he’s a blubbering mess. They show him a photo of Rio, but he has no idea who he is.

Phoebe tells Beth after that Gene confessed to everything under the sun… except for anything that had to do with Rio. Phoebe warns her that “they’re rounding you all up tomorrow… just pick a side.” 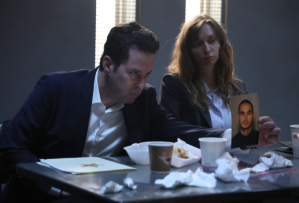 When Rio comes for his latest batch, he asks Beth who’s more fun, him or her “van people.” “What do you think?” Beth sternly asks. Within moments, Rio and Beth are in cuffs, as police swarm around them. Their eyes never lose contact.

Phoebe and Dave strut into the station, playfully arguing about who’s going to question Rio first, but when they get to the exam room, they learn Rio walked. Someone above their pay grade intervened. We see Rio walking toward his ride. Nick’s in the driver’s seat. “So what do we do about her?” Rio asks. “I don’t see any other way.”

At the Hill household, Stan tells Ruby that Gene is out of their lives for good; his old boss is going away for many, many years, but Ruby stops short of telling him how that happened.

At home, Beth goes upstairs to find Rio waiting for her in a dark corner of her bedroom. (Admit it: Who jumped a mile when Beth did?) She tells him she didn’t have have a choice. “Yeah, you did,” he says. You just didn’t choose me.”

In the last of the night’s flashbacks, Rio sits in front of a “Welcome Home” cake, as he learns Nick was promoted. Rio went away for a six-month stretch for his petty theft. Nick then shows Rio wads of cash he scored from stolen clubs and liquor at the golf course. “Now they trust me,” he says with a smile on his face.

“Now, they’ll believe anything you tell them,” Rio tells Beth in the present. “We can do whatever we want.”

Young Nick has the last line of the episode: “They’ll never see us coming.”

So what exactly do Nick and Rio have up their sleeves, and is Gene really gone for good? Fire away in the Comments below!