The Good Girls are (finally!) back this Sunday, and while they’re still breaking all sorts of bad, the hurdles that stand before them are lining up like never before.

When we last left the ladies, Beth and Dean (played by Christina Hendricks and Matthew Lillard) were prepping the launch of Boland Bubbles, a hot tub store that will provide the women with a sneaky new method of washing cash for crime boss Rio (Manny Montana). But with Agent Phoebe Donnegan (Lauren Lapkus) still working the case — and whose hunches have put the women directly in her crosshairs — Beth, Ruby (Retta) and Annie (Mae Whitman) are going to have to hustle harder than ever to keep their sheisty operation hidden from the Feds, while also attempting to stay alive. (Need a quick refresher? Read our Season 3 finale recap.)

It’s been a whopping 10 months since the last episode dropped, so TVLine checked in with co-showrunners/executive producers Jenna Bans and Bill Krebs to ask some burning questions about the super-sized 16-episode (!) fourth season (premiering on NBC Sunday, March 7 at 10/9c). Read on for some killer teases.

TVLINE | When we last spoke, your plan was to make the unfinished five episodes from Season 3 the first five of Season 4. Is that still the case or were there rewrites along the way? [The coronavirus pandemic shut down production before Season 3 could wrap.]
BILL KREBS | It was more or less the case, but because everything is so serialized on this show, we were really teed up for the back third of Season 3 in such a good way, so we just carried it forward. Instead of hitting this massive crescendo on what would have been the season finale, we took what would have been Episode 3×16 (which is now 4×05) and expanded those ideas to really build out the back half of Season 4. It was a happy accident. We had a lot to pack into our finale last year, and all of a sudden found ourselves with an embarrassment of riches: lots of storylines and threads that we could actually expand on.

TVLINE | When we last saw Beth and Dean, they were prepping their new business, Boland Bubbles. Will the store be open at the start of Season 4?
JENNA BANS | It’s actually open in the premiere!
KREBS | It’s Dean’s way to have a fresh start, to build a business the right way. Boland Bubbles is going to be his redemption. He’s making inroads with rebuilding his family, and he’s going to do the right thing with the hot tub store. Unbeknownst to him, Beth is going in a different direction with the store behind his back…
BANS | …and using it as a massive laundering operation. She’s still in cahoots with Rio, so Beth and Dean are on a collision course. We’re just waiting for him to find out what she’s really doing behind the scenes.
KREBS | You really empathize with him in a way that’s surprising, because this is the guy who was so awful in Season 1. He’s trying everything he can do to redeem himself, but he’s kind of being tortured along the way.

TVLINE | What’s ahead in terms of Agent Donnegan’s growing case against the women?
BANS | What we love about Phoebe is that her case against them is not just a case. She grows personally involved with all of the women, especially Beth. Beth, as a character, really brings up a lot for Phoebe, in terms of her adolescence, her experience in high school, and the girls she admired and wanted to be friends with but never really got to. Beth is a trigger for Phoebe, which we play for comedy but also play as a twisted basis for their relationship and friendship.
KREBS | Whereas Agent Turner was there to solve the case and put down this woman who he didn’t really believe in as a true mom, Phoebe is there to figure out her own issues with her past.
BANS | She’s basically working with Beth and alongside Beth, which they end up doing throughout the season. Our goal with Phoebe was to make it much more than, ‘Here comes the Feds to investigate the women yet again!’ but to really make her a part of the women’s lives. She’s more on the inside, and entwined with Beth and the women in a way that is twisted and weird to watch.
KREBS | And she’s torn over what her real objective is with Beth. Is it to do the noble thing and [put away] the criminal, or is she trying to punish someone or right a wrong from her own past?

TVLINE | Will Lucy’s murder from last season affect the story going forward? I have a feeling that situation isn’t quite wrapped up yet…
BANS | It’s not, no, you’re right about that! Lucy’s murder becomes a driving force this season. Even though the character of Lucy is gone, both her murder and Phoebe’s investigation collide in a fun way and get very intense. Not only for Rio’s criminal enterprise, but for the women, too.
KREBS | And for the initial cop who was investigating it.
BANS | There’s going to be a lot of surprises in Season 4. We have a lot of fun callbacks and recurring guest stars. People you might have thought were done pop up in unexpected ways.
KREBS | We like Easter eggs! 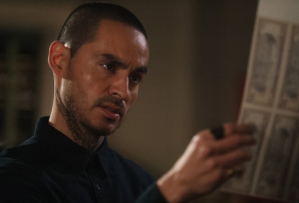 TVLINE | Beth hired a hitman to take care of her Rio situation, but what is taking him so long to get the job done?
BANS | It’s really because he’s into Beth.
KREBS | He’s infatuated by her. He knows the second the hit’s over, she goes away.
BANS | He asks her to have dinner with him and she realizes there’s this subtextual request for romance in exchange for him to finish the job, which she is rightly horrified by, and so are the other women.
KREBS | It’s rare that he finds someone in his line of work that can understand him — or so he thinks — especially someone of the opposite sex, so he wrongly reads the situation.
BANS | It becomes another darkly comedic situation that Beth has to take into her own hands. Bill and I are huge fans of Andrew McCarthy (who plays Fitzpatrick), so we get really fangirly when he’s on set and acting with Christina.
KREBS | He’s excellent.

TVLINE | Lastly, can you give us a tease for a Season 4 storyline you’re particularly excited about?
BANS | There’s one we’re really excited about, and that is Rio’s backstory.
KREBS | People are always asking how Rio has risen to power. How is he always able to get out of trouble? We get into his origin story and show his evolution and how he rises to prominence, and what drives him. You’ll come to learn that he might not be alone in this whole operation…
BANS | …and this person makes life difficult for Beth and complicates what is already a very complicated relationship she has with Rio. It introduces a different dynamic to the show.
KREBS | It answers a lot of questions and builds a very nice romantic triangle. You wonder, how is Rio’s life so frictionless? Is he just that smooth or is there a reason for it?
BANS | This season we finally find out the reason, and that reason might be even more intimidating than Rio.

Want more scoop on Good Girls, or for any other show? Email InsideLine@tvline.com and your question may be answered via Matt’s Inside Line.