While the Season 3 finale of Good Girls may not be its intended finish, the twisty hour laid groundwork for the ladies’ future in some major ways. Beth finally carves her own path in the counterfeit con, while Phoebe Donnegan’s hunch gets her closer to the women than ever before. How did it all wrap up? Let’s recap the season’s closing caper! (And make sure to go here to hear showrunner Jenna Bans and EP Bill Krebs break it all down.)

Agent Donnegan hits the salon to get her nails done by (who else?) Ruby, who checks a $10 bill in the light. She then details the tricks of how to tell if cash is real, which pretty much confirms Donnegan’s suspicions. When Ruby gets up to make some change, she leaves her purse out in the open…

Dean and Beth make Gayle an offer to buy the pool and spa store. She’s surprised, dumbfounded even, but Dean has clearly done his homework. Beth lowkey lets Gayle know that she knows, and then gives her two options. The first, Gayle can bow out discreetly. The other is pretty much the same “…only we would be less discreet and your family would just hate you for the rest of your life,” she adds.

When Ruby can’t find her phone (which, of course, Donnegan swiped), Annie suggests she check her pocket. “You think I didn’t check my pocket?” If looks could kill! Retta’s reaction is perfect, and the Ruby/Annie back-and-forths have really delivered some of this season’s best comedy.

When Beth delivers money to Rio, he asks how her system is going. Beth tells him that hot tubs are sort of like mattresses; brands aren’t apples to apples, so prices can vary, which means her books can say anything. Rio then tells her that she’s going to wash everything on her end. “But my system is just for me,” she says. There’s a business term for that, he says. Synergy! He still plans on reaping most of the profits and giving her just a tiny cut, so Beth really has no option: She’s gotta off this guy, ASAP!

Stan is pissed that their savings is gone, because he worked many shady side-hustles to pony up that scratch. “What do you want from me?” Ruby asks. “I want you to be the woman that I married!” Eeek! Stan wants to be paid back and he’s dead serious. 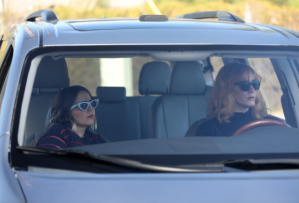 When Ruby suggests robbing Stan’s club, Beth tells her that couples therapy might be a better idea than grand larceny, because stealing from an armored truck is an insane idea. With limited options, they move forward with the club heist anyway. Ruby swipes a few of the club’s money bags, while Beth and Annie do some recon, watching Stan swap bags with truck’s driver. Meanwhile, Beth helps her son perfect a science experiment that will come in handy later.

The day of the job, Ruby weaponizes her cooking to distract Stan. She tells him she’s going to pay him back every cent. That and a little bit of slow-cooked pot roast seem to break down his walls. When the armored car pulls up, Beth distracts the driver, while Annie slips behind them with decoy bags filled with fake cash. Stan feels something’s up, so he goes out to check. When he opens a bag, we see a little ball of foil tucked inside — the science experiment. When the truck pulls away, the foil lights on fire, destroying the “money” before anyone can detect it’s fake.

Beth tries to get Gayle to sign the sale agreement, but the boss lady alludes that Dean didn’t tell her the whole story. She also sniffs out that Dean’s fooled around before. “I’m not the first, am I?” she asks. “Should I hold on to this?” motioning toward the check Beth just handed her. “I’ll take that,” Beth says, snatching it back.

Stan gets home and asks what Ruby did with the money. Just like that, Stan is paid back… only he sees it as her stealing from him to pay him back. These two are continually at each other’s throats.

Beth asks Dean if he ever would’ve slept with Gayle. His answer: “Probably.” Beth thanks him for his honesty, but Dean could’ve done without the lusty description of the woman’s assets. Being married on Good Girls is a tough gig. I think everyone on this show needs some counseling.

Rio’s guy comes for a pickup and Beth asks him how they stole her furniture. The next day, she shows up to the hot tub joint and the place is completely cleared out, allowing her to make a low-ball offer. After all, it’s just an empty showroom now.

Stan gives Ruby one last chance to accept the ring he bought her as a peace offering. “I don’t know where we’re going, I just want to go there together,” he tells her. At least one of this show’s marriages seems to be salvaged.

When Beth gives Rio a walk-through of the new operation, she asks him, “When does it get to be mine?” His response: “Next time, empty the clip.” Next time, maybe she will.

The ladies close out the season by celebrating at the park with some brown-bagged bubbles. Agent Donnegan jogs over, pretending to recognize Ruby from the salon. She asks what they’re celebrating, and the women uncomfortably dodge the question.

Now it’s your turn! Was this a fitting end, considering the circumstances? Grade the finale and season below, then drop some comments!