Lynn Pierce is not a metahuman. But she is a highly respected scientist, wife and mother on Black Lightning.

This is why her arrest on a violating civil rights charge on The CW superhero offering last week felt so shocking. While being jailed, Lynn was subjected to a degrading strip and body cavity search that prompted some fans to praise the show’s realism while others criticized the scene for being exploitative and triggering.

Christine Adams, whose past credits include Agents of S.H.I.E.L.D. and Terra Nova, stars as Lynn on Black Lightning (Mondays, 9/8c). Adams says while she hears the complaints loud and clear, she’s hoping that fans understand why the storyline needed to be executed this way.

“Full disclosure, I haven’t watched Episode 9 because I’m not ready,” Adams tells TVLine unabashedly. “I will, but I’m not ready because I shot it and it was hard to shoot. To pull that scene off, I had to be naked in every sense. But I’ve read all the comments and I know a lot of people were really triggered by it and I understand that, especially now.

“But before George Floyd’s death changed how people look at the Black Lives Matter movement all over the world, Black Lightning was doing these stories from Day 1,” Adams says proudly. “We always said we would be the mirror to the Black experience in America. We’ve always committed to that, and that’s what people have loved about the show.”

In the first installment of Season 4, for instance, Jefferson (Cress Williams) used his powers as Black Lightning to disarm two white, racist cops who roughed up an innocent Black teen, and Lynn took down a sex trafficker. 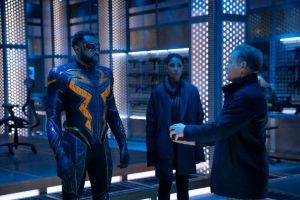 “It would be wrong for us at this juncture, even though everything in the outside world is absolutely crazy, to suddenly censor what we do because that’s not what we’ve done,” Adams continues. “We have stayed true and honest, and there’s a reason that scene was so graphic and hard to watch and raw and we all agreed that it needed to be that way.

“I think it was necessary,” she elaborates. “We don’t have to look for storylines at all because these kinds of things happen and they keep happening. To have a show with a Black family and not explore that would be a disservice.”

In terms of shooting the jail scene, Adams says she couldn’t have done so without the guidance of the episode’s director, Keesha Sharp, who has acted in series like Girlfriends and Lethal Weapon.

“It was such a difficult episode for many, many reasons,” Adams reveals. “Having an actress as a director in those moments meant she completely understood what it was going to take. Keesha knew exactly what I was struggling with and she knew how to give the adjustments I needed. I had a real partner in Keesha, and I’m really grateful for that and I think it shows in the work. I’m really proud of it and I’m glad we were able to get to that place.”

Adams says challenging work such as this is what drew her to acting. 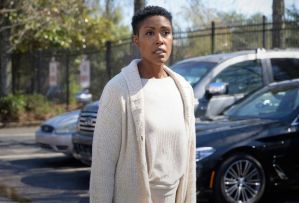 “Even when Keesha yelled cut, I couldn’t cut,” she says. “But any actor worth anything wants to rise to the occasion because those are the kinds of scenes that you live for. That’s what you want. That’s what I love about [executive producer] Salim Akil. He’s not afraid. And he’s made Lynn a badass and there’s no shrinking. She’s always going to go all out and she’s always going to do whatever it takes. Always.”

Black Lightning fans will see if, and how, Lynn, Jeff, Anissa (Nafessa Williams) and JJ (Laura Kariuki) are able to rebound in Episode 10 now that Tobias (Marvin “Krondon” Jones III) has jailed the family matriarch and taken away the superhero Pierces’ powers.

“We’re really ramping up and you can see that Tobias has been playing the long game in terms of how he’s been able to maneuver the Pierce family,” Adams divulges. “The extent of what Tobias is able to do is going to be pretty major. He’s got them where he wants them and the last three episodes explore that. Without giving too much away, the question becomes, ‘If the Pierces didn’t have powers, would you still watch?’ Maybe we’ll see.”