As the summer of racial reckoning played out across our screens with people filling the streets to protest the police murders of George Floyd, Breonna Taylor and others, Black Lightning creator Salim Akil watched and thought deeply about what he could do.

Fans of the CW series learned of Akil’s eventual decision when the Season 4 opener premiered Monday night. Titled “The Book of Reconstruction: Chapter One,” the episode showed Jefferson Pierce aka Black Lightning (played by Cress Williams) reacting to two white cops harassing and frisking a Black teen who had been innocently walking down the street holding a violin. The two officers accused the teen of having drugs and demanded that he hand them over.

Jefferson, who clocked the interaction while driving, parked his car and asked the cops to let the kid go because he knew the boy and knew he hadn’t done anything to deserve being treated like that. But the cops didn’t trust Jefferson and pulled their guns, despite him being unarmed. “I’m so tired of this…,” a frustrated Jefferson said just before angrily striking both officers with bolts of blue lightning from his hands, sans disguise. While Jefferson didn’t kill the cops, he made sure to leave them writhing in pain before he wiped their memories. It’s a message-packed creative choice, Akil says, that brought him a sense of peace. 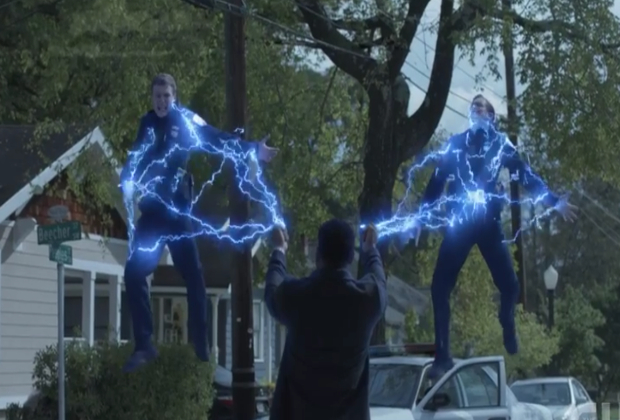 “I was really emotional and touched by everything that was going on,” Akil shares with TVLine. “I couldn’t just do the show and not try to participate. So many people were putting their lives on the line, you know, young people. This is how I typically go about protesting and getting involved.”

Akil says that of all the news that came out about Black people who died at the hands of the police, Elijah McClain’s story struck a chord. He’s the 23-year-old Black man who died days after Aurora, Colorado police officers placed him in a chokehold in the summer of 2019.

“I was watching this video and he was such a beautiful soul,” Akil recalls. “I saw a video of him playing the violin for cats. What a sweet soul. And then I saw the video where he was pleading with officers and it had a profound effect on me along with all the people in the streets. 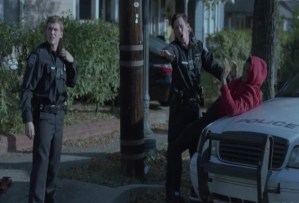 “I was motivated by that and I wanted to see him live,” Akil says, adding that the innocent character he created for Black Lightning‘s season premiere is both an homage to McClain and Trayvon Martin. “The idea to me was if we had someone like Black Lightning, they would still be alive today.”

Law enforcement officers weren’t the only ones in the hot seat as the Arrowverse series kicked off its fourth and final season. The decision to have Lynn (Christine Adams) take down sex traffickers, and Anissa/Thunder (Nafessa Williams) and Jennifer/Lightning (China Anne McClain) foil a drug deal, also carried a deeper meaning.

“It’s very intentional,” Akil says. “Not all of us, but too many of us, go through these things. And as much as I love that we have a very large and culturally diverse audience, I like to speak to the truth of Black folk.”

What did you think of the beginning of Black Lightning‘s end? Also, if you want scoop on any Arrowverse show, email InsideLine@tvline.com and your question may be answered via Matt’s Inside Line.