Warning: This post contains spoilers from The Circle Season 2, Episodes 9 through 12. Don’t read on if you don’t want to know!

Break out all the sad-face emojis, because The Circle is making some tough cuts as Season 2 approaches its endgame. Did this season’s “messy queens” get checkmated on their way to next week’s finale? Let’s break down all the (dramatic!) highlights, and then we want to hear what you think:

Episode 9 picks up with the freshly eliminated Jack (aka Emily) and Lisa (aka Lance) joining forces to play a new catfish profile, with a sweet old guy as their photo. (His occupation is listed as “psychic,” which is hilarious.) They name him John and make him gay with three kids, and he gets a warm welcome from the other players. (Chloe: “I love psychics! I go to them every week.”) But they’re also preoccupied with paranoia, after seeing video evidence that Emily and Lance were both catfish. Mitchell is devastated — “Can’t believe I was flirting with a dude” — and Khat doesn’t believe Chloe when she says her BFF Emily didn’t come to see her. Can you feel the tension building? 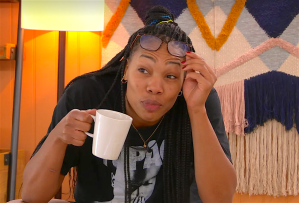 KHAT’S CLAWS COME OUT | The tension builds even more when Khat pulls Courtney and River into a “Southern Queens” chat and starts openly bad-mouthing Chloe. They play nice to Khat’s face, but they quickly run back to Chloe and tattle on her, with the #TeamCardashians trio pledging undying loyalty to each other. But Chloe’s heart is elsewhere: After a “Geek Chic” quiz game, in which Trevor luckily pulls off a sports question — if he hadn’t, his catfish cover would be blown for sure! — Chloe decides to declare her feelings to him in a private chat, telling him she can’t wait to meet him. “Don’t fall in love,” Deleesa, aka Trevor, says to herself. “That’s gonna make me feel bad.” Oh, it’s gonna make Chloe feel bad, too!

The new guy John is charming people left and right — during a party for the quiz winners, he guesses what numbers the other players are thinking of… and they tell him he’s right, even when he’s not! — but Khat is not charming Chloe. In a private chat, Chloe subtly notes to Khat that “if someone is being a snake, it always bites them back,” giving her the finger while sending her a red heart emoji. (We’ve all been there.) Things are getting very political around here, so it’s fitting that Episode 10 is “Democracy Day,” with the players all voting for which of them deserves a package of treats. Courtney and River tie for the lead, and John breaks the tie by giving Courtney the win. Courtney’s kind of concerned, though: Does this put a big old target on his back? 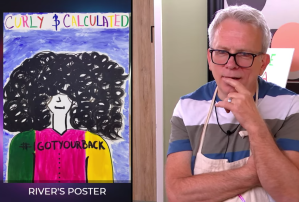 ‘CURLY & CALCULATED’ | That doesn’t stop Courtney, though, from stirring the pot further by spilling the beans to Trevor that Khat wants his girl Chloe out. Then when the players have to design campaign posters for each other, Trevor takes a shot at River by calling him “Curly & Calculated” on his poster. (“Somebody don’t like me,” River notes.) We’ll find out who doesn’t like who soon enough, because it’s ratings time! As the new guy, John is immune, and once again, the two top-rated players will be influencers and vote on who gets blocked. And Khat’s sneaky ways seem to have caught up with her, because she’s ranked dead last, followed by Mitchell and Courtney. River is third — which means Trevor and Chloe are influencers! It’s a date!

The two lovebirds head up to the hangout for a romantic chat, and they agree Courtney is safe. Trevor brings up River’s campaign poster — which he/she made! — but relents when Chloe insists he should stay. So it’s down to Mitchell and Khat. Chloe doesn’t trust Mitchell, but Trevor says he’s a stand-up guy, and Chloe shares that Khat called her a liar, but Trevor wants to give her “a second chance.” So who’s going home? Episode 11 reveals their decision: It’s Khat. (So Chloe won that argument after all.) Khat goes to see Trevor on the way out, and she’s not even mad that he’s a catfish; she and Deleesa quickly strategize that Mitchell is the key to breaking up the Courtney/River alliance. Khat also drops a bomb in her exit video, calling out a few “messy queens” (gasp!) and hinting that snakes “have more than one head.” Despite the huge, honking clues that she’s talking about Courtney and River, Chloe still doesn’t get it. Aw, bless her heart. 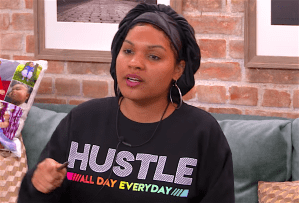 THE #TRIFECTA STRIKES BACK | While Chloe gets a psychic reading from John — “I believe that he’s a psychic because he knows all the psychic words. Like Capricorn” — Trevor and Mitchell scheme to use her to pry Courtney and River apart. “This is chess, not checkers,” Trevor declares before laying out his plan: Mitchell will get Chloe on his side by opening up to her, the three of them will form the #Trifecta and get rid of either Courtney or River at the next elimination. It’s a pretty good plan, actually, and a “Circle Awards” game convinces Mitchell he needs help when he wins for “Best Performance” and ties with River for “Kiss Ass.” So he chats up Chloe and lays it on thick, telling her how people always misjudge him… and revealing he’s a virgin. Chloe’s a big sweetheart — or a big sucker, depending on your perspective — so it works like a charm, of course.

The gameplay goes into overdrive in Episode 12, with Mitchell reaching out to Courtney and River for support — and them wondering why he never bothered to speak to them before. Mitchell and Trevor pull Chloe into a group chat, and Trevor is blunt: “We have some things to tell you that you are not going to want to hear.” Mitchell tells her that the Joker said she’s two-faced and not to be trusted, and it definitely was Courtney. Poor Chloe is very confused, and she tells Mitchell and Trevor that it’s “us three ’til the end!” but she still wants to trust her #TeamCardashians pals. The emotions get jacked up even further when a game asks the players to reveal how they’d spend the prize money — Chloe wants to support her dad’s addiction recovery charity, and Courtney wants to take care of his stepdad, who is dealing with stage 3 kidney disease — and when the players get teary messages from their loved ones at home. (It’s so great to see the real Trevor and Deleesa’s baby girl!) 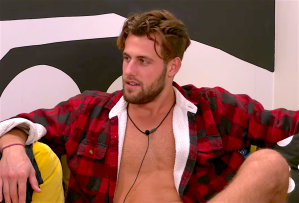 But we all know why we’re here: to rate each other without ever actually meeting each other. It’s time to rate, and the battle lines are clearly drawn: Courtney and River versus Trevor and Mitchell, with Chloe and John stuck in the middle. Those two both rank River first, which is a bad sign for the #Trifecta. We don’t get to see the ratings, though; instead, the top-rated player will become “a secret super influencer” (!!) and decide who gets blocked all by themselves. The winner is… River! He talks out all the pros and cons before arriving at his decision — and in a twist, he has to deliver the bad news himself, face-to-face. He heads into the hallway and ends up at the door of Mitchell, who thinks Lee is John at first. (Ha!) Mitchell is surprised he’s blocked, but they hug it out, and the others celebrate making it to the finale. (Three catfish out of five finalists!) They’ll all get to meet each other tomorrow IRL, when the winner will be revealed. For us, though, we have to wait another week. Dang it.

Alright, it’s time to lock in your ratings: Vote for who you think should win in next week’s finale — and who you think will win — in our polls, and drop all your thoughts and predictions in the comments.