There is an abundance of blood and violence on Invincible.

But the Amazon Prime animated series’ Season 1 finale, which dropped this Friday, was especially so, because Omni-Man turned his son Mark’s face into raw hamburger meat. If Mark weren’t half Viltrumite, which is what makes him Invincible, then he surely would’ve died from all the bloody blows Omni-Man delivered to convince Mark to turn his back on mankind … much like Omni-Man had. Turns out that was his mission on Earth all along — to eliminate the weakest among the human race.

The more Mark refused, the more Omni-Man kicked his ass. He smashed his face in their hometown, he made a building fall on him in Chicago, and then at the side of a mountain in an undisclosed location, he made part of the mountain fall on him and punched him some more until some of his teeth fell out. Somewhere along the way, Omni-Man broke Mark’s legs too.

He also hurled insults at Mark and made horrible comments about Mark’s mother being more like “a pet” than a wife. And Debbie could hear him because Cecil surveilled the whole battle, sound and all. Yipes. So a divorce, then?

Invincible, though bloody and battered, remained just that as he fought back, stayed alive and kept trying to save all the people he could as his dad tried to kill them. But there was no way to save those people on the subway that Omni-Man plowed through using Mark as a human battering ram. Good Lord! 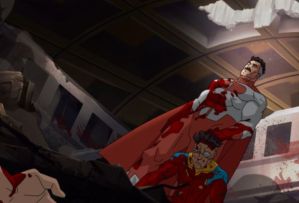 Ultimately, Omni-Man/Nolan only stopped pummeling his son’s face and body at the side of the mountain because he looked at him long enough to remember that during Mark’s childhood, they’d had a really human and wonderful moment. A moment when Mark played little league baseball and somehow managed, without his super powers (because they hadn’t kicked in yet), to hit the ball far into the outfield and actually score a run.

In that moment, although Omni-Man had said he could create another 17-year-old son in as many years, he became Nolan again and realized he does love his son. When he asked Mark why he wanted to live on a planet where his mother Debbie and all of his friends would be dead in 100 years, but he’d still be alive because Viltrumites’ lifespans last hundreds of years, Mark said that he would still have Nolan, his dad. That’s when an angry but teary-eyed Nolan flew far away to parts unknown.

After the fight and the destruction, mankind rebuilt as we always do. The new Guardians team helped with the clean-up efforts, and things slowly returned to normal as Mark somberly healed in the hospital and barely spoke a word. When he got out, Cecil asked if he still wanted to be Invincible, and Mark said he didn’t know. He returned home to find his mom crying alone in her bed, and he hugged Amber when she stopped by and said she wanted to get back together.

William and Eve also stopped by, and all four went to the Burger Mart to talk and eat and figure out the future. But before they could get too comfortable, Mark got a call from Cecil, and he was off. He flew to the moon and, along the way, saw Allen the Alien, and the two talked telepathically like they always do. Allen had come to warn Mark that there was a Viltrumite on Earth, and everyone was in danger. But Mark said he knew and that that Viltrumite was his dad, who is now MIA.

The two sat on the moon and talked things out, and Allen wondered if Earth was safe now. An awesome montage followed of all the threats Earth faced without Omni-Man, including those devious Mauler Twins and those invading aliens Omni-Man crucified, and Mark said Earth was fine. But boy, is he in for a surprise when the series returns for Season 2 and 3.

What did you think of Invincible Season 1? Give the finale a grade in our poll, and share your thoughts in the comments.