Human suffering, thy name is The Handmaid’s Tale Season 4, Episode 3.

With June captured and the rest of the rogue handmaids on the run, you can guess the level of physical and emotional torture that takes place in this installment of Hulu’s dystopian drama. I’m warning you up front: It was hard to watch and hard to write about, and therefore I’m not going to delve into all of the finer points of the horrors visited upon our girl. And it ends with the death of two of June’s comrades, so prepare yourself.

On a slightly brighter note: “The Crossing” also is Elisabeth Moss’ directorial debut, and she does a bang-up job. Read on for the hour’s highlights.

‘THINK OF ME AS HER GUARDIAN ANGEL’ | June is shackled and taken to a facility, where Nick meets her and tells her that Esther is in custody but Alma, Brianna and the other handmaids are still at large. The guardians assume they moved on to the next safehouse. “If you don’t tell them where they are, I can’t help you. Please let me help you,” he says softly. Then Aunt Lydia shows up to act as June’s “advocate,” she announces. “Think of me as her guardian angel.” (Heh.)

They walk down a hallway where torture is taking place in nearly all the rooms. And when June reaches hers, the abuse begins. Lydia slaps her. “Did you think about how I would feel? You have caused so much pain. I hope you’re happy with yourself,” the older woman says before a man referred to only as “Lieutenant” enters to genially ask questions about the handmaids’ whereabouts. When June replies with “God has forsaken this place,” he swiftly punches her in the sternum. Then he and some other men waterboard her while Aunt Lydia waits outside, making progress on her needlework as June chokes and sputters. 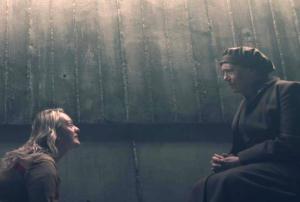 When that’s done, Lydia makes sure to tell June that if she and the other handmaids had just followed the rules, they’d be OK. June’s like OH HELL NO and points out that handmaids are raped, beaten and humiliated over and over because “you failed them.” An angry Lydia knocks her off her chair, but June’s not done: She points out that Lydia’s beloved Janine “turned on you in a f–king second.”

June later avoids having her fingernails pulled out by lying and saying that the handmaids are hiding in a library in Burlington, Vt. That buys her a little time but ultimately lands her on an elevator to the roof. It’s nighttime and pouring, and there are two other women, handcuffed and standing on the ledge of the building. A helicopter circles. It’s hellish all around. The lieutenant says if June gives up the safehouse location, she can save the lives of the women on the roof. “June, don’t tell them anything!” one of the women yells, and the lieutenant casually pushes her off the building to her death. June is horrified. Then June holds hands with the other woman, and they’re both crying. The remaining woman says, “June,” and then the lieutenant pushes her off, as well.

Back inside, June is put in a small box with holes in it, and — oy — we aren’t even halfway through the hour.

HEAVEN IS DEFINITELY NOT THIS PLACE ON EARTH | June sings “Heaven Is a Place on Earth” to herself — nice callback to her time at the hospital in Season 3, there, and also an indication of how much of a beating her psyche has taken by this point. Then she’s hauled out, hooded, and brought to another room… where Commander Lawrence is sitting at one end of a table laid out with a lavish meal. Classical music plays in the background. There are candles. It’s incredibly surreal.

He promises that no one will hurt her, then lays out what’s been going on. As a result of her Jezebels plot, nine commanders are in the hospital and six are dead. He says if she doesn’t cooperate, they’ll hurt her older daughter, Hannah. This gives her pause, but she quickly dismisses the idea. “Gilead, they’d never hurt a child,” she says. “That’s all they care about.” He shakes his head. “Gilead doesn’t care about children. Gilead cares about power. Faithfulness, old time values, homemade bread — that’s just the means to the end.” She’s crying as she tells him to go have The Ceremony with himself, but he looks sad. “I was hoping we could avoid this,” he says, almost crying as June is taken away. (Side note: What June doesn’t know but we do: Earlier, Nick convinced Lawrence to help him save her by saying that doing so could help him stay in his house and may be even more beneficial.) 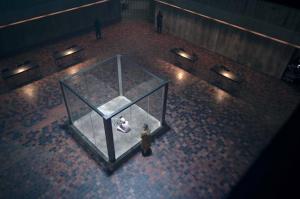 So June is put in a room where Hannah sits inside a glass case, playing with a doll. When the girl sees her mother, she doesn’t recognize her and is very afraid, which kills June. “It’s OK, baby,” she says, crying as she slowly approaches her. (Side note: This scene is AGONIZING.) The lieutenant walks in, and it’s over: June tells him the handmaids’ actual location. He leads her away, promising that Hannah is safe.

At the safehouse, the handmaids are sleeping when flashlights outside wake them up. They huddle on their knees as footsteps approach, but then Alma stands and the others follow her. They all hold hands as the men bust through the door.

IT CAN’T GET WORSE, CAN IT? (IT CAN) | A chipper Aunt Lydia lets June know that her friends have been “retrieved, safe and sound.” June begs Lydia to kill her. But she says they’ll do no such thing: A healthy womb is a healthy womb, after all. They’re going to send all of them to a magdalen colony, where the commanders and wives will visit them once a month for The Ceremony. “A breeding colony,” June flatly translates. Lydia reminds her that everything that happened was “your fault, your choice” and then kisses her on the head. “This is the start of a new adventure,” she says.

Before that, though, Nick has June brought to him in the middle of nowhere. He tells her Hannah is back home and safe, then apologizes for what took place. “I had to do what I had to do to keep you—” he starts, but she’s more torn up by the fact that Hannah was afraid of her, “she wasn’t afraid of them” meaning everyone else in Gilead. She cries, and he pulls her close. “She loves you. I love you,” he says, wiping her tears and putting his forehead on hers. When her ride arrives, she starts to leave but then stops, runs back and kisses Nick. He kisses her back, and she tells him she loves him.

Next we see, all of the rebel handmaids are dressed in red and in a van with Aunt Lydia. At a railroad crossing in the middle of nowhere, the sign comes down and the guardian driving the car says it’ll be a while, and he’s got to step away to pee. Suddenly, there are LOOKS flying all over the van among the women; a lot of them have to do with the cattle prod lying casually in Aunt Lydia’s lap. And without a word, the women fly into action. June grabs the prod and holds it down across Lydia’s neck, then wields it like a bat, beating the older woman with it. (Why not shock her with it, I wonder?) Then the handmaids RUN.

It’s tough going, because their hands are bound with leather restraints. And the commotion brings back the guardian, who starts firing into the escaping crowd. He hits two of the women, and they go down. June and Janine make it across the tracks before the train passes. But Alma and Brianna aren’t so lucky — they’re plowed down by the train’s engine as it speeds past.

In a flashback to when the women were sleeping in the gymnasium right after they were pressed into being handmaids, we see them all mouthing words to each other in the dark. June voiceovers about their learning to lip read. Moira is there, too. And, like in Margaret Atwood’s book, June goes through a mini roll-call. “Sarah. Ellie. Brianna. Alma. Janine. Moira. June.”