You’ve gotta admire how The Handmaid’s Tale‘s Serena just can’t stop herself from competing with June — as we see in Episode 2, even Mrs. Waterford’s fallopian tubes are in on the neverending quest to best her former handmaid!

Yep, the thing that the Waterfords thought would never happen does, actually, come to pass in “Nightshade”: Serena finds out that she’s pregnant. Sure, both of the Waterfords are currently being held in a Canadian facility as they wait to find out whether they’ll be convicted as war criminals, but hey, details!

Meanwhile, June does either a very good thing or a very bad thing, depending on your point of view. Read on for the episode’s highlights.

TIME TO GO | Two guardians come looking for the man Esther killed in the season premiere. They leave without finding anything, and Esther wonders what their visit means. “It means I have to leave,” June says resignedly. The friendly guardian brings her to a Mayday contact at a nearby estate, which June realizes has been turned into a Jezebels. In the greenhouse, June finds a woman smoking among the plants. “I thought you’d be taller, the handmaid that killed Commander Winslow,” she says. Her name is Daisy, and if she looks familiar, it’s because she’s played by Laura Vandervoort (Smallville, Bitten). We learn that Daisy was also at the Boston Jezebels, but after Winslow’s death, “They cleaned house. I was one of the lucky ones.” That look on June’s face? It’s her realization that her actions have consequences she didn’t plan for. And if you missed it, don’t worry — it’ll come around again at least once later this season.

Daisy tells June that “word’s gotten out” about the children’s flight, and rebel groups are engaging in small acts of defiance: slashing tires, cutting lines, blowing up a checkpoint. But June wastes no time: “Do you have a safehouse for us?” Daisy says she does, but she can’t send the word until tomorrow, so they’ve got to sit tight. Plus, tonight there’s a huge amount of military commanders at the house for “one last party before Chicago,” Daisy notes, which gets June’s wheels turning. 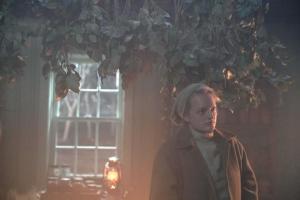 THAT GIRL IS POISON | Back at the Keyes’ farm, Alma really isn’t on board with June’s new plan: Kill the commanders, liberate the Jezebels house. “So you’re just going to Rambo in there, shoot the place up, get yourself killed or caught?” she asks, incredulous. But June doesn’t seem very bothered by that scenario. Esther is distraught to learn that the rogue handmaids are leaving, and she begs them not to leave her there. June acquiesces and says she can come with them, which earns her a huge hug from the traumatized commander’s wife. Something else dawns on her at the same time: She figures out that Esther’s husband’s addled state isn’t from dementia or something like that, but because she’s been poisoning him. “You learn things on a farm,” Esther says simply. June lights up. “Can you teach me how to make more?” she asks.

Turns out, Mrs. Keyes really knows her way around deadly plants. “I only give him a little, to keep him from being a bother,” she explains. “My martha showed me how. He’s not a good man. Maybe there are no good men in Gilead.” This is a bleak outlook, even for June, who says there are good men everywhere, “even here.” 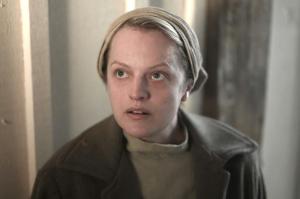 THE WILD PARTY | That evening, before returning to Jezebels, June tells Janine to get everyone ready for their imminent departure upon her return. She hooks up with Daisy when she arrives, and Daisy is scared but eventually agrees to help get as much poison as possible into the drivers and commanders cavorting inside. Then, for good measure, June dumps a bunch of poison into some liquor bottles and the tea of a mean aunt.

When she and the nice guardian arrive back at the Keyes’ farm, June instantly realizes something is wrong. All the lights are on in the house, and the front door is open. She urges the guardian to go, but he says he won’t leave her. As they walk, June steps on something, looks down, and realizes it’s a bunch of shell casings. Nice guardian reaches from his gun but is fatally shot from out of nowhere before he can even grab it; his blood spatters all over June. She reaches for his dropped weapon but realizes she’s done for when the red dots of at least four laser sites converge on her torso. Then Nick (!) strolls out of the darkness toward her and asks where the handmaids are.

She doesn’t answer. He crouches down, softly saying, “I’m trying to keep you alive,” and he gives her the most surreptitious of touches on the shoulder as he stands. Then his men grab her, and I inappropriately giggle at how many men Gilead think is necessary to restrain one handmaid. It feels like there are 10 of them! 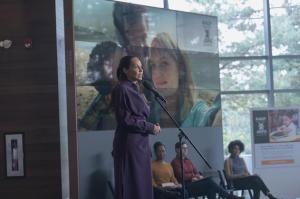 JUNE’S HANDIWORK BEYOND GILEAD | In Canada, a charity has grown up around June’s big move from last season. It’s called Angel’s Flight, and Luke, Moira, Emily and Rita are very involved. Rita addresses a group of potential donors, but it’s clear that she’s (obviously) still very shaken by everything she’s gone through. June “got us out, and she stayed behind to keep fighting, even knowing what it could mean,” she tearfully tells the crowd. “Gilead has a way of bringing out the worst in people, but in June, it brought out the best.” 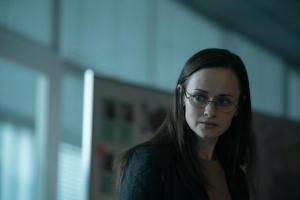 We later see that Moira has a new girlfriend, and that Angel’s Flight does a lot of work placing the children from the plane with family and/or new parents. It’s not always a happy matter, however: One boy, Asher, has only known Gilead and really misses his martha, his room and his (faux) mom and dad. Moira hooks up Rita to hang out with him, which seems to bring him some comfort. But even Moira points out how June never thought through what would happen when the plane landed. “That’s what she does: takes the big swing, and f—k the consequences,” she says to Emily. That also applies to Moira’s current home situation; “I love Nichole, but I never wanted to be a mom,” she confesses to Emily. Emily wonders why Moira feels the need to clean up June’s messes, and Moira says she felt guilty about getting out when June didn’t… but now she’s tired of feeling guilty. Emily totally understands.

THE BLESSED (BE) EVENT | At the detention center, Serena is examined, stripped of her clothes and photographed. She tells her questioners that Fred didn’t abuse her, per se, but he did sleep with other women. Her lawyer advises her to establish a pattern of abuse, which will help her regain her legal immunity. “But it wasn’t abuse, exactly…” Serena quavers, which angers Mark Tuello. He wonders why she’s giving Fred the benefit of the doubt. “Because I knew him before Gilead,” she explains, asking to see her husband alone. She has a plan that she’s going to get Fred to drop his claim against her, which is in Tuello’s interests, because she is his chief witness, and it’s a bad look to have an accused sex offender as your chief witness.

So Tuello arranges for the Waterfords to meet in the chapel. She tells Fred that everything she’s saying is “just a legal strategy,” and that they won’t have to air their private lives in court if he drops his claim about her. “You’ve gotten rusty,” he says. “You used to be so good at getting me to do what you want. But my eyes are open now.” (Ha!) Serena presses on, saying that she just wants Nichole back. “Nichole is not your daughter, any more than she is mine,” he replies. She accuses him of never standing up for her “not once, once you got a taste of power,” then he mumbles something about giving her too much freedom. When he tries to touch her, she shies away, and he leaves.

But all of that seems moot, anyway, when the results from Serena’s exam come back. “You’re pregnant, Serena,” Tuello says harshly. “Congratulations.”