What, you thought The Handmaid’s Tale‘s June Osborne was going to nurse her wounds at a comparably idyllic farmhouse for more than half an episode?

Nah, the Hulu drama’s Season 4 premiere reminds us — and June — that she’s here to chew gum and dismantle Gilead from the inside… and she’s all out of gum. Read on for the highlights of “Pigs.”

SAY A LITTLE PRAYER FOR YOU | The action picks up right where the Season 3 finale left off, with June bleeding out from a gunshot wound as the other handmaids carry her to safety. There is a LOT of blood and June is fairly out of it, but in her more lucid moments she panics and demands that they keep moving. Just before the women cauterize June’s wound with what looks like a… oh God, a curling iron?, Alma assures June that the martha network is hooking them up with a guardian who can get them to a safehouse.

Then there’s a harrowing truck ride and some stumbling through the woods before they approach the house. As June approaches to ascertain that everything is kosher, a guardian holding a lantern promises her, “You’re safe.” She cries a little, then faints as the other women run toward her. And as they hurry her inside, it’s clear that June is even worse than we thought: She’s vomiting and burning up with fever, sure signs of infection. A commander’s young wife flits about the edges of the activity — and even at this early stage, you can tell that she’s a little unhinged by the gleeful way she talks about how she dreamed about killing people with June — and then June blacks out. 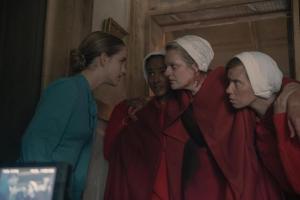 When she wakes up, we get the full story. June and the other handmaids involved in Operation JetBlue These Kiddos The Hell Outta Here, including Alma, Janine and Brianna, are staying at a farm presided over by Commander and Mrs. Keyes (the latter played by The Haunting of Hill House‘s Mckenna Grace). June’s body is trying to knit itself back together with the aid of homemade penicillin and makeshift antibiotic ointment, and she’s nowhere near 100 percent healed, but she’s aware that they are not out of danger: “No more time for me to stay in bed,” she voiceovers.

IF YOUR CUP IS FULL, MAY IT BE AGAIN | The handmaids have gotten comfortable on the farm, posing as marthas as they help with the planting and animals. Commander Keyes is considerably older than his wife and seems to be suffering from dementia or something similar; at best, he looks through the women circulating through his household and grounds. Esther Keyes, however, is a bloodthirsty little thing who’s very astute. “I wanna hurt them so badly, Gilead,” she tells June, who cautions patience. “If you weren’t gonna fight, why did you come here?” she says, mood shifting like the breeze. “You should’ve just let them catch you.” 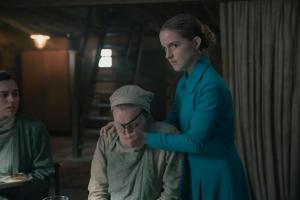 After Esther treats Janine terribly at a meal, June follows her outside and warns her to stay away from the one-eyed handmaid. “You know what they do to handmaids, don’t you?” June growls. “Show some f–kin’ respect.” But she softens her stance a bit when she learns that Esther’s commander was unable to have sex with her most of the time, so he brought in many other men who repeatedly raped her. “Wives have bad things, too,” she says as both women cry and June apologizes. She hugs the girl close and repeats that none of what’s happened is Esther’s fault.

June’s sisters-in-arms, meanwhile, don’t necessarily want to go on the march to take down Gilead. “Maybe this is as free as we’re gonna get,” Alma says. “Maybe we should make the best of it.” And indeed, when June comes across all of them dancing and enjoying themselves while Grateful Dead’s “Ripple” plays on a radio, it seems like the closest thing to happiness any of them have experienced in a while. But the real world interferes when a truck pulls up to the house and a man is tossed into the driveway: His name is Guardian Pogue, and he was one of the men who violated Esther.

‘MAKE ME PROUD’ | The good guardian says he’ll take Pogue to the river and “deal with him,” but June says no. She instead addresses the other women, calling the man a traitor who betrayed the United States “and raped a child, repeatedly.” It’s like the stoning in Season 1, only for GOOD. “The punishment for these crimes is death,” she adds. And as Pogue is strung up in the barn, June hands Esther a knife. “You were right. We’re Mayday. We don’t hide, we fight,” she tells her. “Good girl. Make me proud.” Esther replies, “I will.”

And she does. Later, June is resting in bed when Esther comes in, covered in blood. She climbs in bed with her and spoons her, then says, “I love you.” June puts her hand on Esther’s and smiles. “I love you, too, Banana,” she whispers, clearly thinking of her first daughter.

THE WATERFORDS FIND OUT | Up north in Canada, Mark Tuello informs Fred and Serena that 86 children and nine marthas just arrived on a plane from Gilead. “Their poor families,” Serena coos. “They’re being reunited with their families as we speak,” Tuello spits back, and I have never loved him more. He then shares that June planned the whole thing but is still at large. “They’re gonna find her, and they’re gonan kill her,” Fred murmurs. “May God show her mercy,” Serena replies, looking like she thinks quite the opposite.

BACK IN GILEAD | After being “interviewed” — read: tortured — by the Eyes for 19 days, Aunt Lydia appears before the Commanders’ Council, which determines she won’t need further discipline. Guys, Aunt Lydia looks BEAT. UP. And I know how we feel about her, but damn Ann Dowd for making me sympathize with this monster! Anyway, Lydia makes a bid to handle June herself, when she’s located:”Pray, gentlemen, find her and bring her to me, and a frail woman will sleep better at night. I leave you to your work.”

Elsewhere, Commander Lawrence is being held in a cell when he gets a visit from Nick, who thanks him for his service to Gilead. “Was there a trial?” he asks, and Nick says yes, prompting Lawrence to ask how he fared. When Nick thanks him again, Lawrence deadpans, “That good, huh?” So the next day, when men bring him into a room with a menacing-looking chair at its center, Lawrence is sure he’s going to be killed. But Nick shows up again, quietly saying, “I think there still may be more that you can do for your country.” The younger man has convinced the council to bring Lawrence in as a consultant, because “some men need to be led.” Lawrence chuckles, observing, “The Tao of June Osborne.” And that chair? It’s so he can be comfortable while he gets a shave from the barber who’s brought in to clean him up.