The Good Doctor took an off-brand political detour on Monday as the team raced to save two gunshot victims under the age of 10.

Despite calling out former president Donald Trump and current POTUS Joe Biden by name, the episode chose to stage a fictitious political protest for Proposition 266; at no point did the episode acknowledge the policy set forth by Prop 266 or why people chose to protest it. Among those in attendance at the demonstration were 8-year-old Ethan, whose mother, Taryn (Designated Survivor‘s Italia Ricci), dragged him there ahead of his soccer game; and 9-year-old Mason, whose mother, Carina (Orange Is the New Black‘s Elizabeth Rodriguez), drove him to the event. Both young men were wounded when shots were fired off-screen: Mason took several bullets to the chest and abdomen; Ethan took a bullet to the head. 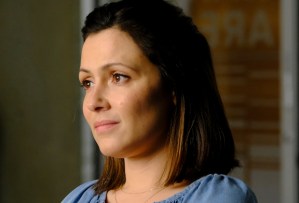 As the surgeons worked on Mason, who required their undivided attention, Claire and Asher got into an argument about whether Republicans or Democrats are more intolerant. “I think there are some intolerances on both sides,” Andrews said, before acknowledging that he’s a card-carrying member of the National Rifle Association. He explained that four or five years ago, he and Isabel went to “a very trendy restaurant in a very shady part of town” and were mugged at gunpoint; the next day, he went out and purchased two handguns. Following Andrews’ admission, Asher came forward and confessed that he voted for Trump in 2016. “I liked his stance on Israel,” he explained. “I’ve never told anyone because I’d be absolutely vilified.” And Claire responded exactly as Asher expected: Her opinion of him changed as soon as she found out he voted for Trump.

Claire and Asher’s spat continued outside the operating room. As they wheeled Mason in for his second procedure, Asher asked Claire if she agreed with Biden on every issue. “Of course not,” she answered. “But I agree with him on more than one.” But just how many? And where’s the line? “Every vote is a compromise,” Asher argued. “We support the things we think are important and rationalize the things that aren’t. And unfortunately, compromise has become a dirty word — which is ironic, since that is the essence of democracy.” (Asher’s argument would hold up better if the episode addressed any actual policy. How do you do an episode focused on gun violence and not address gun control? But I digress…) 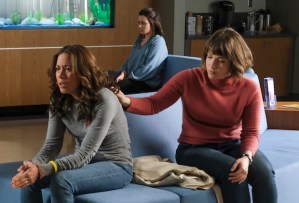 Taryn and Carina were also presented on opposite sides of the political spectrum. Early on, we found out that Taryn and Ethan attended the political rally in support of Prop 266, while Carina and Ethan were part of the opposition. Again, we have no idea what Prop 266 entailed. But when Mason required A-negative blood to keep him alive, Taryn put her politics aside and donated twice the typical amount of blood to keep the young boy alive. This selfless act inspired Claire to put her own political opinions aside and ask Asher out for an after-work cheeseburger. All is forgiven…?

Ethan also pulled through, against all odds. Park was about ready to throw in the towel — seeing Ethan in his soccer jersey reminded him of a young Kellan, and it got to be too much — but Morgan encouraged him to keep at it until he came up with a life-saving course of action to remove bullet fragments lodged deep in his brain. Park thanked his friend-with-benefits for motivating him, then broke things off with her to see where things go with pediatric resident Heather. (Ouch!) 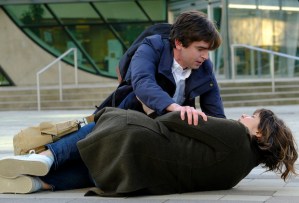 This was the rare episode where Shaun didn’t save the day. Seeing a young child in peril affected the dad-to-be in a way he’d never experienced before: He was thinking irrationally. As Glassman explained, it’s perfectly normal; it’s the price of parenthood. In Shaun’s defense, he spent much of the episode concerned about Lea and the baby. Lea had come in that day for a glucose screening test, a routine procedure that checks for gestational diabetes. Lea got the all-clear, but stayed at the hospital overnight to sit with Taryn and Carina. The following morning, she and Shaun left the hospital feeling incredibly lucky about the test results. But moments later, Lea grabbed her stomach and fell to the ground. Shaun called out for help as the episode drew to a close.

What did you think of The Good Doctor Season 4, Episode 15: “Waiting”? Was the obvious effort not to ruffle any political feathers a benefit or a detriment to the story being told? And just how concerned are you about Lea and the baby after that cliffhanger? Drop your thoughts in a comment below.