Monday’s episode of The Good Doctor got right to the moment #Shea fans have anticipated for the last three weeks: Before the opening credits rolled, Lea got the results of the fetal DNA test, which disclosed the sex of the baby.

“It’s a girl! We’re having a girl!” the mom-to-be said excitedly. She was over the moon. Shaun, on the other hand, was, um… what’s the word I’m looking for? Shaun was present? Yeah, let’s go with present.

After finding out the gender of their unborn child, Dr. Murphy made a concerted effort to be a more supportive partner to Lea. That included accompanying his girlfriend to Lamaze class, where he put all the expectant mothers on edge when he mentioned the possibility of uncontrollable bowel movements during childbirth. (To the surprise of no one, Shaun and Lea were asked to find a different Lamaze class. The look on Claire’s face when Dr. Murphy relayed the news was priceless.) 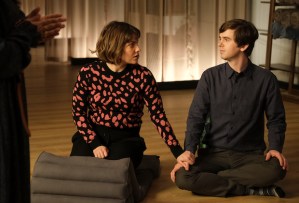 When Lea coordinated for her and Shaun to meet with Theresa, a prospective doula, Shaun was not pleased. He can try to give Lea everything she needs in the delivery room, he said — the keyword being try — but Lea wants certainty. She needs to know that someone will be by her side to give her a massage at exactly the right pressure, or to lend a hand to squeeze reallyyyy hard, or to provide a damp washcloth at a moment’s notice. To leave those duties for Shaun would be a “setup for failure,” she said. Shaun, however, was unconvinced. After all, he’d already looked into antimicrobial washcloths!

To further his research, Shaun walked into a delivery room with a pen and paper in hand. After he told the mother-to-be that it was too late for an epidural, the unamused obstetrician notified Glassman. In Glassman’s office, Shaun explained to his surrogate dad that he wants Lea to have everything her heart desires when it comes time to deliver their kid… except for a doula. “Why can’t you just give her what she needs?” Glassman asked. Shaun had no answer.

Later that night, Shaun presented Lea with an electronic massaging device he’d just ordered for her. He also bought a pair of oven mitts so she’d be able to squeeze his hand as hard as she wants come Delivery Day. “I can make you feel safe and comfortable,” he maintained. “I am the father. I am going to be a good father. You don’t need [a doula].” But Lea stood firm. “My body, my birth experience, and I want to have her there with me, so we’re going to have one,” she said. (You tell him, Lea!) 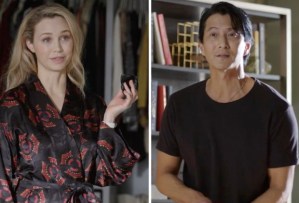 In addition to the big gender reveal, this week’s episode paved the way for Morgan and Park’s inevitable coupledom. After three rounds in the sack — or “burning calories,” as Park put it — Morgan sought to establish some ground rules for their not-a-relationship: Park was not allowed to leave his phone charger at her place; he can’t just “plug in” without “the charger’s consent.” (Heh.) She also told him that he needed to see other people. She hacked his Bumble account and uploaded the ultimate “thirst trap” photo. He ultimately wasn’t interested in any of his matches, but he was interested in pediatric resident Dr. Boyd. Park and Boyd left the hospital together at the end of the hour — and Morgan didn’t look especially thrilled about it.

What did you think of The Good Doctor Season 4, Episode 14: “Gender Reveal”? Drop a comment with your full review.