Is it time for Legends of Tomorrow‘s demonologist to get happy? Which #OneChicago duo is headed for a “major” event? Will a Legacies mystery be solved? Should SEAL Team fans be worried? Read on for answers to those questions plus teases from other shows!

Got any Legends of Tomorrow scoop about Zari and/or Constantine? — Katie H.
Two birds, meet singular, time-traveling stone! Executive producer Grainne Godfree tells Inside Line that at the beginning of the season (premiering Sunday, May 2), “We will see John Constantine in a new and more mysterious state than ever before… happy. Astra is no longer in Hell and John is cautiously optimistic about where things are with Zari.” Now, speaking of Zari (and you were): “Although she and John are both cool customers who keep their feelings close to the vest, it’s clear they have a chance at a real relationship here,” Godfree previewed. “But first, they will have to battle aliens intent on taking over Earth, Zari’s status as a social media celebrity, and John’s own personal demons…”

When will Legacies fans learn the identity of The Skull Hunter who seems to have a connection to Landon? –Mark
Executive producer Julie Plec shared with Inside Line, “We’re not far off from learning the identity of the Skull Hunter — just a couple more episodes.” (FYI: The CW drama resumes Season 3 on Thursday, May 6.)

I loved it when we got to see Legacies‘ Lizzie use Clarke’s ring to shapeshift into Hope last season. Any chance we’ll see any more of Lizzie impersonating Hope, or the ring in general? –Robert
EP Julie Plec said that while there are “no immediate plans for shapeshifting Lizzie,” “since Jenny Boyd can do anything we ask of her, it’s nice to know her talents are appreciated.” 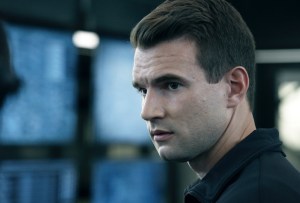 What’s coming up for S.W.A.T.‘s Street during the final episodes of the season? –P.D.
“Over the course of four seasons, we’ve seen Street mature a great deal. The final five episodes of this season will test his maturity,” says executive producer Aaron Rahsaan Thomas. “There are a few big developments that we’ll see — a personal reckoning for Street, in a surprising way.”

Will Chicago Fire fans actually see the Stellaride cabin trip that was teased in 9×07? –Lizzie
I delivered your Q to showrunner Derek Haas, who responded, “We haven’t been to the cabin in a while, have we? Hmmm.” Oh, but wait, there’s more….

Will we get a Stellaride-centered episode of Chicago Fire? –Brenda
“Aren’t they all?” countered EP Derek Haas, before he shared this: “We’ll see a major Stellaride event right near the end of the season.”

Any Zoey’s Extraordinary Playlist spoilers? —Bea
Alice Lee, who plays Emily, told us, “There’s a really adorable flashback episode where we kind of get to see where everyone was like six, seven years ago” — including “a little bit of” Emily and David’s early relationship, which is “so cute.”

Do you have an update on Season 2 of Warrior Nun? –Vasso
The Netflix series, which bowed in July 2020 (and was renewed not long after), is on track to resume production in a few months. 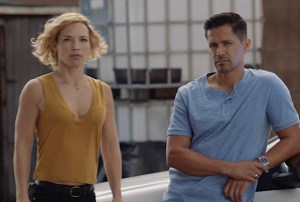 Can you tell us something about the season finale of Magnum P.I.? —Emilie
In addition to what the super-savvy fans may have already gleaned from the May 7 finale’s official synopsis, I am hearing that Magnum will be given food for thought when, while it looks like Higgins and Ethan may be on the outs, TC and Rick have a chat with their friend about his and Higgins’ partnership — and whether it could ever be something more.

Any scoop on CBS’ SEAL Team? –Michelle
I have four words for you, teasing the remainder of the yet-to-be-renewed military drama‘s current season: Significant loss. New beginnings. (Note: The character photo above was randomly chosen. Don’t read into it. Unless you choose to.)

Anything about Manifest‘s Jared that we don’t know about? –Cassia
“Jared is dead set on solving his cold case and solving his love life,” notes showrunner Jeff Rake. “He’ll achieve both. Or so he’ll think.” 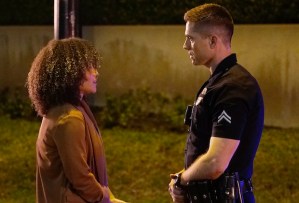 What’s the deal with no mention of Rachel this season on The Rookie? Did she and Tim break up off-screen, or will she be back? –Lital
All I know is that we will neither see nor hear mention of Rachel (played by Jasmine Mathews) — who moved East to New York in last year’s finale but planned to enjoy a long-distance romance with Tim — before season’s end.