The staff of County General reconvened for a virtual stroll down memory lane on Thursday, as George Clooney, Julianna Margulies and several fellow ER alumni appeared on Stars in the House to wax nostalgic about their time on the long-running NBC medical drama.

Scroll down for a recap of all the highlights from the two-hour special (which you can watch here), then hit the comments to share your favorite moments from the special…

ER Cast: Then and Now

EIGHTH TIME’S THE CHARM? | After a string of primetime failures, Clooney knew he had a hit before ER made it to air. “I remember when we were at the Upfronts,” he said. “We were standing backstage — Julianna wasn’t allowed to be there, because [Carol] was supposed to be dead — and they showed [the trailer], and the place went apes—t… We knew the time slot was great, because there had only been two shows in 16 years in that time slot… and suddenly it was like, ‘Oh, we’re going to be working for a while.'” 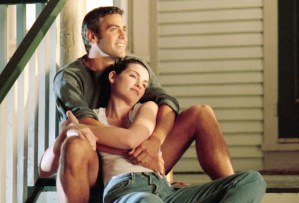 MARGULIES’ ALMOST-LIFE ON THE STREET | Having believed Carol died in the pilot, Margulies was ready to move on. She had already done two episodes of Homicide: Life on the Street, and she was set to do more… until Clooney gave her a ring: “George called me and said, ‘If you’re thinking of taking another job, I urge you not to. I think in the next couple of days, you might be offered a series-regular role.’ And I said, ‘But I died, how does that work?’ … A week later, they called and said, ‘We’re going to make you a series regular.'” (Prior to the ER call, Margulies consulted Homicide EP Tom Fontana, who told her, “‘If you don’t take risks in life, you’ll never know. And I’ll always have a place for you here [on Homicide].'”) 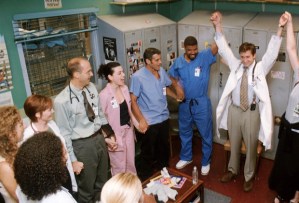 CLOONEY ‘SET THE TONE’ ON SET | When watching a scene with Clooney and Pounder, Wyle was taken aback by just how many background actors he recognized — 26 years later. He attributed that to Clooney. “George, very early on, you called us into your trailer and you said, ‘I’ve had the benefit of being on seven series that haven’t gone on. Here’s what we’re going to do differently: We’re all going to be nice to everybody, and we’re going to erase the lines between foreground and background, and cast and crew. We’re all going to take our work seriously, but we’re not going to take ourselves seriously. We’re going to do our homework, and we’re not going to waste rehearsals learning our lines.’ You laid out the ABCs of professionalism that we operated under.” 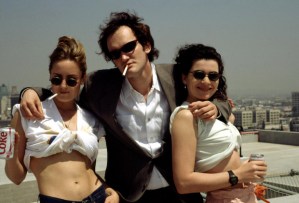 THE DIRECTOR WHO MADE HIS MARK | Every director who booked ER was determined to make their episode distinct — but only one future Oscar winner was capable of pulling it off: “When Quentin Tarantino [pictured right, with Sherry Stringfield and Margulies] came to direct us, he was such a big fan of the show,” Margulies recalled. “He only did one take, so they didn’t have a choice to edit. We would rehearse, rehearse, rehearse, do one take, and he’d go, ‘OK, let’s move on.’ And I said, ‘Why are you doing that?’ And he goes, ‘It’ll be my cut, no matter what.'” 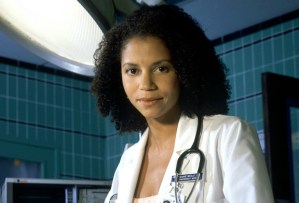 GROUNDBREAKING HIV STORYLINE | Clooney gave credit where credit was due, singling out Reuben’s turn as HIV-positive physician assistant Jeanie Boulet. “People forget, it was 1995,” Clooney said. “People were still coming to terms with Magic Johnson… People were afraid to touch one another, and they were scared… It was making people a pariah in some way, and you were playing a character that was saying, ‘I’m going to continue to live my life with this. I was a victim of this in some ways,’ and I thought that was amazing to watch on a show that 40 million people might see.”

Added Reuben, “It was literally at that cusp, as medicine was beginning to give people their lives back. I know this word is used a lot, but it truly was groundbreaking. We broke barriers — who gets HIV, how they get it… Jeanie Boulet was a married, professional, straight woman. It was like, ‘That doesn’t happen.'” Reuben was proud that she played a character who handled her diagnosis with “such strength, grace and dignity.” She also wanted to make sure that the series “wasn’t going to let her die from it, because HIV didn’t have to mean death… I didn’t want [that] to be the message.” 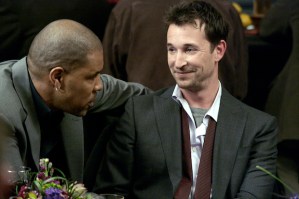 ERIQ LA SALLE GETS HIS DUE, TOO | Wyle took a moment to applaud his MIA costar for his turn as County General surgeon Peter Benton. “He played an unapologetically talented Black man who didn’t cater to anybody’s opinion, and didn’t care to be liked,” Wyle said. “It was an unpopular character to play, and an unpopular stance to take, and I didn’t understand it at the time — I don’t think a lot of us understood what he was doing at the time — but in retrospect, he was standing for something that was extremely significant. It was on the vanguard of something way ahead of its time, and i wish he was here to take a bow for it, because I don’t think he ever took it while we were working together.” 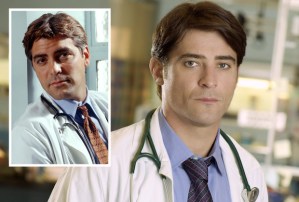 DRS. ROSS AND KOVAC DID IN FACT CROSS PATHS | The medical drama swapped one hunky doctor (Clooney’s Doug Ross) for another (Visnjic’s Luka Kovač) at the start of Season 6. And while their stints at County General didn’t overlap, there was a run-in on the Warner Bros. lot. “I parked the car, and there’s this guy,” Visnjic said, referring to Clooney. “He said, ‘Hey, you’re our new guy,’ and I’m like, ‘Yeah, that would be me.'” Clooney told him he was going to “love it” on ER, and was going to have “so much fun,” then drove off. (Fun fact: Clooney and Visnjic were both in the 1997 film Peacemaker, but didn’t have scenes together.) 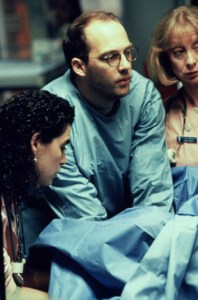 ER: THE NEXT GENERATION? | Asked if they’d be interested in revisiting their star-making roles, the general consensus was no. “When you look at the show, it’d be hard to say that we could do it [again] at the level that we did it,” Clooney said. “Because boy, I’ve actually been watching it a bit because my wife’s been watching it, which is very odd, and I have to say, it’s such great television.” He specifically pointed to Season 1’s “Love’s Labor Lost,” and called it “as good a piece of television as I’ve ever seen… It’s hard to catch lightning again.”

Echoing Clooney, Margulies added: “You can’t capture lightning in a bottle twice. I think you have to leave what was so beautiful and move on, because it just feels cheap… It would cheapen it for me.”

Wyle also chimed in, and credited John Wells for deciding against franchising ER. “CSI and Law & Order… all those shows figured out how they could brand themselves and replicate the model in a different city and get a different show out of it, and I always thought it was classy that we never tried to do that.”