At the end of this week’s supersized episode of The Masked Singer, it looked like the end of the night at a Red Lobster: seafood carnage everywhere.

The two-hour event saw the unmasking of both Crab and Seashell. Their departures cemented this season’s Super 6: Black Swan, Piglet, Robopine, Chameleon, Yeti and Russian Dolls.

But which famous faces were underneath the ousted crustaceans’ costumes? Read on for a recap of what went down!

PIGLET | The big ham sang Foo Fighters’ “The Pretender” and did his usual, solid work as he rocked out. Clues included: sunglasses, a ship, reference to being “lost” years ago and moving back in with his parents, a peace sign foam hand, reference to breaking his finger in the past, an evergreen/pine tree air freshener, a UFO and cotton candy: “This sweet treat reminds me of one of my very first jobs.” (My guess: 98 Degrees’ Nick Lachey) 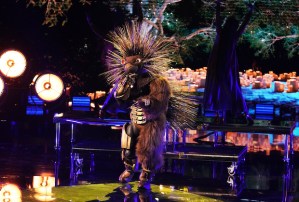 ROBOPINE | “I’ve actually been struggling with depression lately,” the spiny rodent told us at the top of his clue package. You certainly couldn’t tell, though, during his really engaging performance of Marvin Gaye’s “Let’s Get It On.” The guy is good! Clues included: alphabet blocks, baby toys, a statue, a block party and a lobster: “Off the coast of Costa Rica, me and my family get a lot of fresh water sea diving in.” (My guess: The Fast and the Furious‘ Tyrese Gibson.)

CHAMELEON | Not gonna lie: There was a huge chunk of Chameleon’s clue package that I didn’t understand, mainly because I had zero idea what I was actually looking at. There was a briefcase with a #2 on it? Carried by someone dressed like a hornet? And then someone ran after the hornet, and there was some kind of stuffed animal dragged behind? (Feel free to tell me everything I got wrong there in the comments.) His rendition of Warren G feat. Nate Dogg’s “Regulate” was great, by the way. Other clues included: “fried bird and cricket cake,” references to working alongside his idol, deer locking horns and Cluedle-Doo’s comment that “I very much enjoyed your work on the big screen. I was even rooting for you at the Golden Globes.” (My guess: Rapper Wiz Khalifa, whose song “See You Again” was nominated for a Golden Globe in 2016.) 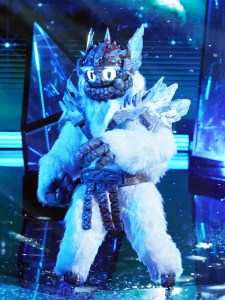 YETI | Yeti performed his cover of Justin Bieber and Benny Blanco’s “Lonely” while on inline skates, and if that doesn’t win him a spot in the Top 2, this entire thing should be burned to the ground. (Kidding! But it was cool.) Clues included: references to his having “a once-in-a-lifetime role that created an avalanche of success” but “my ego caused tons of chaos, and it all blew up,” ABCD, pulling a dog out of a hat, country line dancing and donuts. (My guess: “Ice Box” singer Omarion.)

RUSSIAN DOLLS | All four of the dolls showed up to perform Bruno Mars “24K Magic,” and they were amazing, as usual. I also love how it’s so hard to tell exactly how many singers are contributing to those tiiiiight harmonies. But I digress — clues included: “Made in Milwaukee,” Indiana Ave., a subway turnstile, Russian Dolls Tea Room, “We sold out one of the world’s most prestigious venues, just around the corner,” “Eat Pray ?” on teacups and jellybeans. (My guess: “MMMBop” band Hanson.) 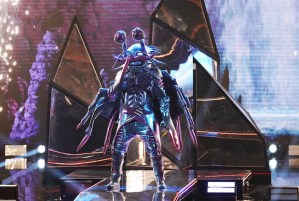 CRAB | Crab sang “In the Air Tonight” by Phil Collins, and even though he went for the Mike-Tyson-in-The-Hangover air drums moment, the performance was impressive (if a bit breathy). Clues included: Brooklyn Bridge, violin, references to a panic attack on stage when he was a kid, jack of clubs, camels (?) and marshmallows (“My kids love ’em even more than me. We love to make s’mores by the fire.”) (My guess: New Edition’s Bobby Brown.) 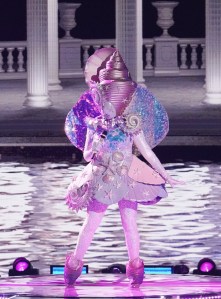 SEASHELL | Wow, I loved Seashell’s take on Tiffany’s “I Think We’re Alone Now,” which was a kicky retro throwback that still managed to have serious vocal power and attitude. Clues included: $119, roast turkey, references to being a live broadcaster, a Christmas tree, TNT, Scout cookies, a gelatin mold and “I know how to make some good fried chicken.” (My guess: Sister, Sister alum Tamera Mowry. Or maybe Tia. But probably Tamera.)

BLACK SWAN | The night’s final performer sang a stripped-down version of Kings of Leon’s “Use Somebody” and it was up to her usual, really high standards. I’d like her to stick around until the very end if possible, please and thank you. Clues included: A bunny with a sign reading “I’m late,” references to being raised by her mom in a one-bedroom apartment, a record player, gnomes, a glass slipper, references to buying her mother a house and goldfish. (My guess: “Too Little, Too Late” singer Jojo.)