Rome and Regina Howard’s wish finally comes true in this week’s A Million Little Things: They started a family.

Sure, the blessed event doesn’t happen the way they thought it would last season, when they planned for months to adopt Eve’s baby boy and then lost that chance in the space of a heartbeat. But when Tyrell’s mother, Martina, is deported to Haiti, an opportunity arises for the Howards to support the teen while his mom starts over from scratch in a country very far away.

Though Tyrell initially (and naturally) wants to join her, both Rome and Regina point out that it’s not safe for him to go to a place where he’s never been and doesn’t speak the language with only a vague idea of where his mother might be. But he’s determined… until his mother herself calls to talk him out of the plan. Rome and Regina realize that maybe the teen is destined to be with them, so they offer to be his foster parents until his mother sorts things out.

“We’ll treat him like he’s our own,” Regina tells Martina during a videocall. “Sounds like you already have,” Tyrell’s mother gratefully replies. 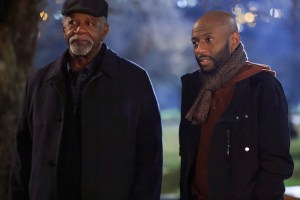 On a related front, Rome realizes that his father’s cell phone is full of voicemail messages from Rome’s late mother. So he puts aside his (pretty ridiculous) criticism of his dad’s friendship with a friendly woman named Florence and edits the voicemails together to make a new, uplifting message for Papa Howard to listen to when he’s down. And then both of the Howard men finish the hour having a nightcap with Florence in the graveyard… as you do.

Aw, yay! Unfortunately, things don’t go quite as heartwarmingly for the rest of the Friends of Jon during the episode. Read on for the highlights of “Redefine.”

HEY THERE, DELILAH | We get our first glimpse of Delilah in quite some time when she videocalls her family to say that she can’t get off the standby list and therefore won’t be able to get home in time for Sophie’s Massachusetts Music Institute audition. Sophie obviously hasn’t bounced right back after what happened in the last episode with Peter, but she’s hanging in. And Gary gives her such a strong pep talk that she decides to go through with her audition even though she’s feeling shaky about it (and everything). Maggie, however, warns Gary that Sophie needs time and space to deal with what’s happened to her. Gary counters that Soph shouldn’t have to lose a year because of what Peter did, but Mags strongly urges him to back off.

Of course, he doesn’t. At Sophie’s request, he’s in the room when she gives her virtual audition. And when one of the judges mentions that Peter spoke highly of her, it throws her. She starts playing but soon stops, closing the laptop and running up to her room. As she cries, she says she wasn’t even good enough to get into Peter’s program: “He was right. I was never going to get into MMI. He was just using me.”

And when Maggie confronts Gary about what he’s done, he admits that he feels responsible for what happened to Sophie: After all, he was the person who first mentioned Jon’s death to the lecherous guitar teacher. Maggie reasserts that Peter is the only one at fault for what happened, but Gary has to stop trying to fix everything. “If I hadn’t tried to fix you, you wouldn’t be standing there right now,” he spits back. OUCH. Angry, Maggie reiterates that what happened is about Sophie, not him, and he needs to listen to what the teen needs.

In the end, what Sophie needs is to hear that Jon would still be proud of her, and Gary provides that. Then he drives her to the airport, where she boards a plane to France to go be with Delilah. (Side note: I assume, because D is French, that her kids might have dual citizenship/French passports? Because that’s the only way Sophie could get into the country during the pandemic, right?)

After Sophie goes inside, Gary cries a little, says, “I’m so sorry, Jon,” and then puts his fist through his car window. Oh dear. 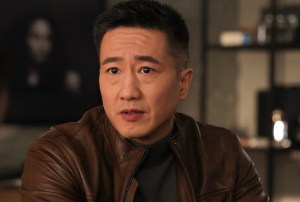 WHAT’S GOOD FOR THE NEWLY SOBER GOOSE… | On the morning of the day Katherine and Theo are scheduled to go see Eddie at his rehab center, Alan stops by the house. He’s got an awkward excuse — something about an extra pizza — and all he really wants to know is why Katherine won’t return any of his calls or texts. He hangs out long enough to help her get a stray cat (whom Theo has taken to calling Scott) out of the house. But then, when Alan and Katherine share a close moment, it turns into another kiss — with both parties completely sober, this time. 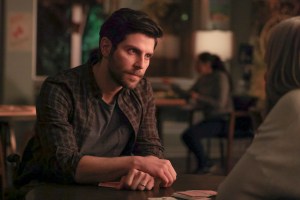 At rehab, Eddie is excited to tell Katherine that he’s realized that he’s “never really been honest with myself about anything.” And that’s great and all, but she’s more interested in other things: She asks what made him have an affair with Delilah. “She saw the guy that I desperately wanted to be. She saw me the way you did when we first met. And it was weak, and it was selfish, but I just missed that feeling,” he says, sheepish. “I get it,” she responds, which takes him aback. And then when Theo casually mentions that Alan had been by earlier? Eddie’s face is one giant HUH?

He’s steaming later as he and Jackie play cards. He thinks about leaving, saying he might lose Katherine. She agrees he might, “but if you don’t finish your treatment, you definitely will.”