This week’s Big Sky this week put a pretty fine point on the nefarious goings-on down at the ol’ Kleinsasser ranch. And if you read no farther than the end of this paragraph, know this: Rand is one messed-up dude.

But you’re going to want to keep going, if for no other reason than to find out what fate befell Cassie after that sheriff’s deputy kidnapped her in the previous episode. Read on for the highlights of “No Better Than Dogs.”

JENNY’S UNLIKELY RESCUER | The episode picks up exactly where the last one left off: with Jenny in the pit of dead cows, and Rand looking real happy to have her there. He tells her she’s pretty, “just like I remember you,” and he wields an axe like it’s a totally normal thing to do. She pulls her gun and shoots a warning shot into the ground near his feet, but it doesn’t do much to deter him: He jumps her, and he’s on top of her when his brother JW pulls up and aims a gun at Rand until he lets her go. “I don’t want any trouble,” JW says, pointing out that Jenny is trespassing. She says she just wants to see the caretaker’s cabin where Rosie was attacked, and to her surprise, JW says he’ll take her. 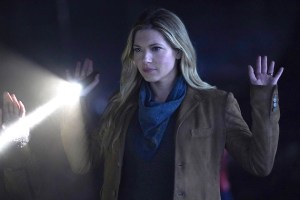 In the abandoned house, Jenny finds a large bloodstain on the bare mattress and a nearly full bottle of booze under the bed. JW abruptly leaves her there; when Jenny finally makes it back out to civilization, she sees that Cassie’s car has been torched.

CASSIE IN PERIL | You’ve got to give Cassie props for her quick thinking: While she’s being held captive in the back of the deputy’s cruiser, she calls Dewell & Hoyt, and the office’s voicemail picks up. So she starts talking about how she’s a few miles past the station, and makes sure to say the deputy’s name and what town they’re in. It continues to record as he pulls over and opens one of the back doors; it looks like she’s about to either be transferred to another car or handed off to someone else. Either outcome seems hellaciously undesirable.

So Cassie kicks the door just as the deputy opens it, knocking him backwards and giving her a chance to run. But she doesn’t get far before tripping and falling; as she goes down, her phone goes flying, revealing the recording. The very angry deputy hits her on the head with a sizable rock, and everything goes dark.

Back at the office, Jerrie plays the voicemail for Mark Lindor, the U.S. marshal we met in the previous episode. So Mark travels to Lochsa County — where Cassie is being held in secret in a closet in the shady sheriff’s private office — and demands that Sheriff Wagy release Dewell. The sheriff refuses… until the governor calls on Lindor’s behalf. (Baller move, new guy!) After Cassie is released, Mark drives her back to the motel, talking about Hall & Oates with her to help her de-stress.(Side note: I realize the ridiculousness of that sentence, but it’s really what happens.) She seems way less skeptical of him than she was, by the way. 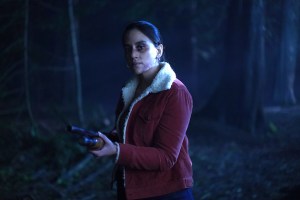 ROSIE’S SIDE OF THE STORY | Back at the motel, Jenny and Cassie don’t really talk about what happened — Cassie’s choice — but they realize that the whiskey that Blake and Rosie bought at the bar and brought to the cabin could’ve very easily been laced with rohypnol or something similar, which would provide a reason that Blake couldn’t clearly remember what had gone down inside the house.

So they track down Rosie’s whereabouts and find her guarding her property with a gun. The Kleinsassers are looking for her, too, she explains, and she doesn’t want to find out why. Her face is badly bruised; like Blake, she doesn’t remember much about the evening in question but woke up the next day “beat to hell.” They were at the cabin to look for an old saddle her father, the caretaker, left there, she explains. But it wasn’t there.

For the record, she doesn’t think Blake is responsible for what happened to her. But she has started having flashes of memory from that night, and in then, Rand is on top of her. 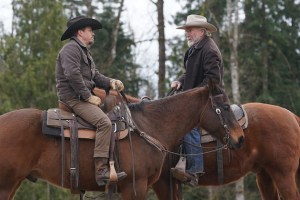 WHAT’S REALLY HAPPENING ON KLEINSASSER RANCH? | Meanwhile, at a highly chaotic breakfast meeting of the Kleinsasser family, Horst announces that JW will take over the ranch after he dies. Even though Blake is the oldest, he “violated the moral turpitude clause of the ranch covenant,” Horst announces. Blake doesn’t care: He has zero interest in carrying on the family business.

But he does want to make things right regarding a former ranch worker named Cole Danvers. During the episode, we learn that Rand killed Cole years before, and that Horst and Blake buried the young man somewhere on the property. The cover story was that Cole stole a truck and ran off, and no one really questioned it; the guilt from being involved in the cover-up was what drove Blake to leave home.

Eventually, Blake digs and digs at Cole’s gravesite until he finds the guy’s belt buckle. JW shows up there soon after and denies what happened, but Blake says Rand “straight up told me he did it:” In a rage, he went after Cole with a shovel. JW wants to cover it all up again, but Blake is adamant they do not. “Burying this is not going to wash away what we’ve done,” he says. So JW hits him with a shovel, and Blake falls into the open grave. 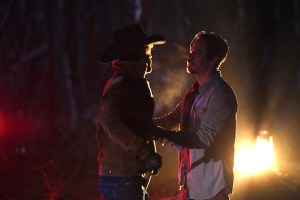 But neither brother knows that their sister, Cheyenne, is watching nearby. And from conversations with her mother and Blake earlier in the episode, it’s clear that she knows a lot more — particularly about what JW has been doing, digging holes in the back pasture and talking about mineral rights — than any of the Kleinsasser men give her credit for.

HEY, ARTHUR! | Now let’s check in with everyone’s favorite, badly bewigged serial killer, Ronald! (I can’t call him Arthur, guys. I’m sorry.) He shows up when Jerrie sings at an open-mic night; she sees him lurking in the crowd, and the fear sends her running from the stage, mid-song. And then Scarlet finds the note Lindor left on Helen Pergman’s grave, thinks it’s from another woman, and uses Ronald’s Taser on him until he tells her a story she believes. (Notice I said “she believes” and not “is true.”) He admits to being at the bar where he saw Jerrie, but tells her the message was one he just happened to pick up off the ground. “I think this note found me just like I found you,” he says, and she melts. Though she claims to have a fragile heart, “I think I’m falling in love with you,” she says, hugging him.