Believe it or not, Blake Shelton twerking — was that twerking? — to Mega Mentor Snoop Dogg’s “Drop It Like It’s Hot” wasn’t the most noteworthy aspect of Monday’s kickoff of The Voice’s Season 20 Knockouts. Four contestants got cut — including one that I was sure (hoping) would go all the way to the Finals — and Nick Jonas, as if having read your comments following last week’s recap, righted a wrong… even as it didn’t necessarily seem quite so wrong anymore. Read on, and we’ll discuss… 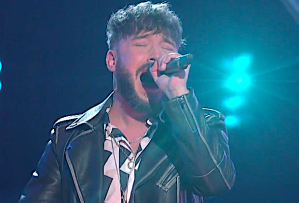 Team Kelly: Corey Ward performing “Already Gone” (Grade: A) defeated Ryleigh Modig performing “Use Somebody” (Grade: C) — Ryleigh stolen by John | In rehearsal, Ryleigh’s “soulfully strong” vocals impressed Snoop. But Kelly warned her not to make the entire Kings of Leon cover big and belty but to leave room for smaller, intimate moments. Corey, on the other hand, got nothin’ but praise for his raw take on Kelly’s song. “I don’t get chills from men, man,” said Snoop. However, he’d gotten goosebumps listening to Corey. On stage, he poured so much brutal emotion into his performance, I felt afterwards like I’d had a good cry. Solid, nuanced vocal and just. So. Moving. I think I’ve underestimated this guy. Up next, Ryleigh couldn’t help but sound weak by comparison, her voice thin and twee next to Corey’s. And this will probably be an unpopular opinion, but I just didn’t think her performance was appealing to listen to, like she was “off” (pitch?) in some way that I’m not smart enough to pinpoint. The coaches disagreed, mind you; John, Nick and Blake all tried to steal Ryleigh.

Team Blake: Jordan Matthew Young performing “She Talks to Angels” (Grade: B+) defeated Ethan Lively performing “Help Me Hold On” (Grade: B) | After running through his Travis Tritt cover, Ethan was advised by Snoop to add a talking element to his rendition for added impact. Blake’s only guidance for Jordan was to loosen up. That was it. That was how good they sounded. When the spotlight fell on Jordan, he turned out a performance that was as solid as sidewalk (and a vocal that was just as spectacularly gravelly as pavement). Not thrilling, exactly, but very, very strong. Second up, Ethan delivered a performance that was vocally on point and wholly disarming — but perhaps more because he is so endearing than because the performance itself was all that connected. (Of note: Snoop’s talky idea was brilliant.) It broke my heart to have to agree with Blake that Jordan had won the Battle — and broke it all over again that Ethan didn’t get stolen.

Team Legend: Pia Renee performing “What the World Needs Now Is Love” (Grade: A) defeated Ciana Pelekai performing “Cuz I Love You” (Grade: A-) | In rehearsal, Pia explained that she’d chosen her classic cover because just before the Battles, her mother had passed away. And boy, could you hear the feeling in her vocal. Bye, Ciana! When Pia’s competitor ran through her rendition of Lizzo, wow — she was not gonna go down without a fight. And she had Snoop to advise her on adding melody to the rap bits! Come showtime, whoa — Ciana came out swingin’! Kid has a voice and a half, personality plus and a cool ability to spin notes like they were so many plates in the air. And that run toward the end — I don’t know how it didn’t leave her winded; it did me, and hell, I was just listening! Second at bat, Pia unleashed a performance that was so polished, she could see her reflection in it. And she wisely built it to crescendos so powerful, they could’ve made the coaches’ chairs turn all over again.

Team Nick: Dana Monique performing “Nutbush City Limits” (Grade: A) defeated Keegan Ferrell performing “Just My Imagination (Running Away With Me)” (Grade: C-) | Practicing with John and Snoop, Keegan was advised to throw in some “sparkles of showbiz” — “oomph,” his coach called it. Dana, on the other hand, threw showbiz into her raucous rehearsal with both hands; she was gonna blow that boy clear off the stage (and possibly out of the auditorium). All Nick and Snoop could suggest was that she choose her moments, don’t try to make every moment a capital-M one. On stage, she took us to a freakin’ party to which we hadn’t even realized we’d been invited. She was just the complete package: raspy, unstoppable voice, presence for weeks, not days, and enough “oomph” to launch a rocket. Trying to follow her, Keegan sadly let himself down, delivering a vocal that suffered from pitch issues and a performance that was as flat as the stage itself. Appealing performer, disappointing performance. 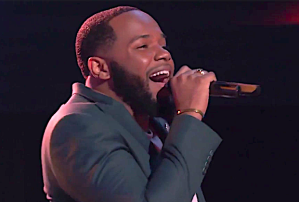 Team Legend: Victor Solomon performing “My Girl” (Grade: A-) defeated Gean Garcia performing “Afterglow” (Grade: B-) | Oh yeah — the minute Victor opened his mouth in rehearsal, I heard the richness in his Temptations cover that had been missing from Keegan’s. And such range! (So much, in fact, that his coach advised him to end on a big, long note rather than a falsetto one.) Before launching into his Ed Sheeran cover, Gean sweetly dedicated it to his mom. John’s primary concern was his enunciation and the fact that he didn’t build to anything climactic. First behind the mic, Victor served a vocal that was so sweet, it would’ve made a fine ice-cream topping, and enough choreography that one Temptation was all we needed. Fun and feel-good. When it was Gean’s turn… well, after Victor, he couldn’t help but sound “small.” And his nerves showed through more clearly than the engaging intimacy of his performance. This wasn’t much of a contest. I like Gean, but he was totally outgunned.

Team Blake: Pete Mroz performing “Before You Go” (Grade: B) defeated Andrew Marshall performing “I Won’t Give Up” (Grade: C) — Andrew stolen by Nick | “I stole you from Nick’s team,” Blake reminded Andrew, “but I like to say I saved you.” True that, since Nick chose to keep the contestant he said lost Andrew’s Battle over him. After hearing his version of Jason Mraz’s hit, Blake dinged Andrew on quavering pitch issues, and Snoop wanted him to feel the song more. Pete sounded a bit out of his element on his Lewis Capaldi number, prompting Snoop to suggest he focus more on the cadence of the verse than the singing of it. This could be messy. First behind the mic, Andrew kinda whispered his verse, flatly as far as I could tell. Things picked up considerably when he got to belt, but overall, this felt sloppy and uncertain. Emotionally committed, yes, but a bit of a sonic tangle. Not what I was hoping for after his stellar Battles performance. When it was Pete’s turn, he brought a storyteller vibe to his performance but didn’t really have the pipes to hit those big notes out of the park. (He did reach the gates of the park, he just didn’t quite get past ’em.) Definitely the stronger performance of the two. Yet, regretting last week’s decision, Nick stole back Andrew.

So, what did you think of Monday’s performances? If you were Nick, would you have stolen Andrew back? And would any of you not have stolen Ethan?!? Vote for the night’s best performer below, then hit the comments with your answers.