The weirdest thing about what happened in Monday’s episode of The Voice wasn’t that Nick Jonas cut the contestant that he and his peers agreed had given the better Battle performance, it was that… it actually made sense. The “loser” was such a standout that you could understand why he’d be reluctant to let her go. Read on, and we’ll discuss not only that unusual sing-off but all of the evening’s pairings.

Team Legend: Victor Solomon (Grade: A) defeated Deion Warren (Grade: A-) on “U Got It Bad” | After having the cutest-ever reaction to meeting Battle advisor Brandy, Victor and Deion absolutely ripped into Usher’s hit. Her advice for Deion was to start softer so that he had room for his vocal to grow. As for Victor, John wanted him to work on his stage presence. When the spotlight fell on them, they were so electric, I almost forgot to take notes. Victor turned out to have some big-time crowd-pleasing moves in him. Still, I sometimes felt like he came off like Deion’s excellent backing singer — that guy is a charisma machine; his voice, as stretchy as a rubber band (even if Blake did ding him on pitch issues). In the end, John couldn’t deny Victor’s sturdier vocal and impressive evolution.

Team Kelly: Anna Grace (Grade: B) defeated Ainae (Grade: B+) on “You Know I’m No Good” | In rehearsal, the contestants revealed that only one of them (sweet, shy Ainae) had ever heard, much less related to, the Amy Winehouse classic — and it showed in their performance. As advisor Luis Fonsi noted, Ainae sounded like “a little star” singing her truth. Kelly’s advice was for both of them to cut their runs in half; they were on The Voice, not The Treadmill. When their Battle got underway, hmm… I really didn’t feel like Anna’s vocal suited the song, especially at first; the four-chair-turn demonstrated once again that she has chops and control, it was just a song/singer mismatch. Ainae’s tangier vocal worked better — it was the sonic equivalent of lime being squeezed in a Corona — but it was, alas, overall less impressive to Kelly’s sub, Kelsea Ballerini. When Anna went big, Ainae was only able to go medium. 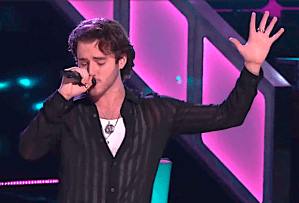 Team Nick: Raine Stern (Grade: B+) defeated Andrew Marshall (Grade: A) on “Adore You” — Andrew stolen by Blake | Before the twosome began rehearsing, I assumed that this Battle was badass Raine’s to lose. But there was a clarity to Andrew’s vocal that said, “Don’t count me out, ya dummy.” Nick wanted Raine to work on her falsetto notes, and he and advisor Darren Criss encouraged Andrew to save some breath to get him to the end of his lines. On stage, well, damn. They did not come to play! Andrew sang with a passion that demanded he be paid serious attention — and he had swagger to burn. The Harry Styles hit served him better than it did Raine, but she nonetheless managed to give hints of just how special a performer she is — enough to convince her coach to keep her even as he acknowledged that, in this instance, Andrew had shone more brightly.

Team Blake: Pete Mroz (Grade: B) defeated Savanna Chestnut (Grade: B+) on “Have a Little Faith in Me” | Running through the John Hiatt song with Blake and advisors Dan + Shay, Savanna turned her nerves into appealing vulnerability. For his part, Pete seemed to naturally tap into the emotion of the song. Behind the mic, he served up album-perfect storyteller vibes. Savanna, however, right from the get-go was able to show more range. Lovely performance from each of them. John suggested that Savanna had been lacking a sense of urgency, and Blake couldn’t help but agree — she was performing in her head, not on the stage. So in the end, he put his old pal through to the Knockouts. 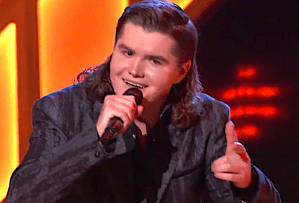 Team Kelly: Kenzie Wheeler (Grade: A) defeated JD Casper (Grade: B-) on “Fishin’ in the Dark” | We altogether skipped rehearsal footage for this pairing, but hey, at least it didn’t get the montage treatment. Maybe it got short-ish shrift because it wasn’t really much of a Battle. The minute mullet-headed Kenzie opened his mouth, wheelbarrows and haystacks falling out, it was over. JD acquitted himself nicely — and pulled out his band-in-a-suitcase gimmick — but Kenzie was so magnificently country, he gave my remote control a twang. As Blake put it, he completely “dumped himself into that vocal.” Hope at some point he gets to sing with Ethan Lively; that’d be a hoot.

Team Nick: Rachel Mac (Grade: C+) defeated Bradley Sinclair (Grade: C) on “Your Song” | In rehearsal, Nick explained that he’d paired these two because he wanted to show off his team’s youth — on Elton John’s oldie-but-a-goodie. Mmkay. What it seemed at first like he was going to end up showing off was their inexperience. His advice to the kids: have more fun. This, I feared, was gonna be rough. And, well, it was. Rachel fared better than Bradley, especially when she belted. But when she wasn’t at top volume, she just threw vibrato in everywhere, whether it was called for or not. Bradley has a nice voice in there somewhere — and a fine growl when he deploys it — but ya get the sense that he doesn’t fully know yet how to wield it. Messy as the Battle was, the coaches fell all over themselves over the duet. Nick even called it the best performance they’d seen in the Battles. Come again, sir? 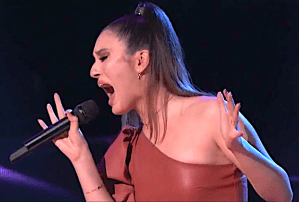 Team Legend: Rio Doyle (Grade: C+) defeated Carolina Rial (Grade: C) on “Somebody That I Used to Know” — Carolina saved by John | “Look who we have here!” said John as he entered the rehearsal room with Brandy. Meanwhile, I was asking myself, “Wait, who do we have here?” I didn’t remember the contestants at all till the flashback clips reminded me that I’d actually kinda dug Rio, whose husky voice sounded cool on her and Carolina’s Gotye/Kimbra cover during their run-through. That said, the clarity of Carolina’s voice really made it stand out. In the moment of truth, erm, I had to wonder if this was really the right song choice for the duo. They wholly threw themselves into it, but neither of them sounded in their element. Rio’s smoky voice was largely wasted, and Carolina wound up yelling as much as singing. In the final analysis, I’d have given Rio the win and promised to choose songs that better showcase her satiny vocal style.

So, what did you think of Monday’s performances? Vote for your favorite in the poll below, then answer in the comments: Would you have kept Raine or Andrew if you were Nick?