George Lopez is returning to his sitcom roots, reuniting with Cedric the Entertainer in the April 26 episode of CBS’ The Neighborhood — and TVLine has your exclusive first look.

Lopez will guest-star as Victor Alvarez, owner of auto-repair chain Motor Boys. When Victor tries to steal Calvin’s customers, the Butlers and Johnsons join forces to drum up business for Calvin’s Pit Stop and give back to their community.

In the following sneak peek, Victor makes a flashy entrance as he crashes Calvin’s interview with a local news anchor:

In addition to his eponymous ABC comedy, which ran for six seasons between 2002 and 2007, Lopez headlined two other sitcoms — FX’s Saint George (2014) and TV Land’s Lopez (2016-2017) — and hosted TBS’ late-night talk show Lopez Tonight (2009-2011). In 2016, he and Cedric embarked on a stand-up comedy tour alongside D.L. Hughley, Eddie Griffin and the late Charlie Murphy, which served as the basis for the BET series The Comedy Get Down.

The Neighborhood‘s third season continues tonight (at 8/7c) with Episode 14, “Welcome to the Hero,” in which Dave thwarts a robbery at the barbershop and earns Calvin’s respect… until the recognition goes to his head. The series was previously renewed for Season 4 (new showrunner TBA), alongside fellow Monday-night comedy Bob Hearts Abishola (which was picked up for Season 3).

Scroll down to see an additional photo from Lopez’s guest stint, then hit the comments and tell us if you’re looking forward to the sitcom vet’s appearance. 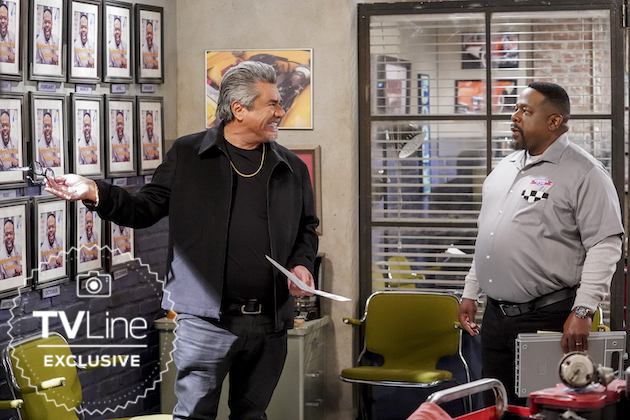