Meet the new boss, who also happens to be True’s boss.

This week’s The Nevers reveals who’s behind Dr. Hague’s horrifying operation (and operations), and it also offers a few hints about the relationship between Maladie and True. There’s a lot to get to, so charge up your electric umbrellas and let’s review what happens in the Jane Espenson-penned”Exposure.”

TOUCHED ON DISPLAY | Things aren’t going well for the touched in several areas of London, starting with a woman working as a salesgirl who inadvertently makes a hat float while she’s working at a large store. She runs after her abilities cause a huge ruckus; in her possession, she has a handbill for Amalia’s orphanage.

Elsewhere, police raid the orphanage, asking a lot of questions about Mary Brighton (the singer abducted by Maladie’s gang in the previous episode) and implying that True is somehow part of the gang. (Her withering stare in response is perfection.)  As soon as the cops are gone, Lavinia Bidlow has some news: In an effort to get society to accept the touched as human beings, she’s going to hold a salon to show off some of the girls’ abilities. 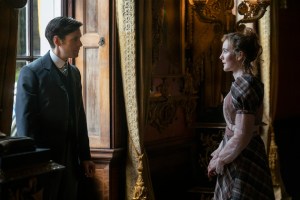 So Adair brings a bunch of her charges to the gathering, and they do a bunch of their party tricks for the gathered swells… who pretty much treat them like zoo animals. The occasion gives Penance a chance to chat with Lavinia’s brother, Augie, whom you’ll recall was also affected by Mary’s song at the opera. When she asks, he says he’s always had an affinity for birds. Then one day, “I dreamt I was a crow… and then it happened when I wasn’t asleep.”

They dorkily flirt for a while (it’s cute), but Lavinia soon takes Augie aside and tells him there’s no way he can be with someone “touched and Irish,” warning him to think of Penance’s reputation. So he’s cold to her when they speak a few minutes later, and she leaves the party, upset, via her motorcar prototype.

ANOTHER CLOSE ONE | With the help of a sex worker named Desiree whose turn is that she can get people to tell her things they shouldn’t, True gets Inspector Mundi to admit that he not only knew Mary, they were supposed to be married, and she stood him up at the altar after a year of being engaged. True shares with him that Mary sings a song that only the touched can hear. “What’s it about?” he asks gruffly. “Hope,” she says.  They theorize that Maladie was abused by doctors, starting early in her life. “Mary makes you feel love,” Amalia adds, which is “terrifying… to someone like her.” After another ripple involving Maladie, True slips out.

At Maladie’s hideout, the raving murderer demands that Mary sing again — but it’s a no-go, because Mary can only produce that celestial anthem when she’s afraid or sad. In her ramblings, Maladie also talks about the day “god” (aka that weird ship in the premiere) came, and how now there’s a “demon” sent after her, “the woman who sheds her skin.”

True eventually winds up at the hideout, where she and Maladie fight. True delivers her pitch about how they’re gathering all of the touched together… but Maladie’s super not into it, mainly because her gang has got Mary and Penance (!) standing on ledges with nooses around their necks. “You’re the woman who sheds her skin,” Maladie tells True, only she calls her Molly. And that’s when True realizes that Maladie is someone named Sarah. From their conversation, we glean that Sarah suffered for “two years of torture” after Molly “fed me to them.” Deeply affected, True cries as she responds that she didn’t have a choice. So Maladie gives her one (as well as a gun): Shoot Mary to save Penance, or vice versa — and if she doesn’t, both will die. 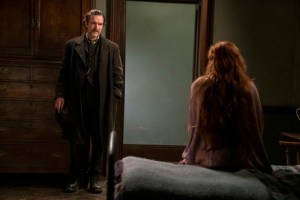 Instead, True shoots herself, then shoots Maladie in the chaotic aftermath. Mundi and his officers run in, tipped off by Desiree, and Penance concerns herself with getting True to Dr. Cousens as soon as possible.

Cousens saves her, of course, but it’s a close thing, and Adair lights into her friend as soon as she knows she’ll live. Then she climbs up onto the bed and draws near, clearly relieved. “There’s loads I’ll need explained, but let’s just be alive for a while,” Adair says. Meanwhile, Mary comes to live at the orphanage, and she and Frank start to repair their friendship, if nothing else.

TRUE’S BOSS IS THE TRUE BOSS | But what about that salesgirl from the top of the episode? Turns out the address she goes to is not the orphanage but a false front for the scary demon dudes we saw pursue Myrtle in the series premiere. They grab the girl and bring her down to Dr. Hague, who is lobotomizing touched people as he pokes around in their brains, searching for the root of their powers.

And his benefactor, who arrives at his workplace near the end of the hour? Lavinia Bidlow herself. During her visit, we see that Hague’s zombified patients are helping unearth a huge, glowing orb somewhere underground. After all, as Bidlow mysteriously reminds him, “This is not fun, this is war.”