This week on The Falcon and the Winter Soldier, Sam and Bucky reclaimed Steve Rogers’ shield — only to then grapple with just how complicated its legacy is. Plus, Zemo’s fate is revealed.

In the season’s penultimate episode (and the longest thus far), titled “Truth,” NuCap retreats to a warehouse after bludgeoning Matias to death in the plaza, where past conversations with the late Lemar swirl through his head. When Sam and Bucky catch up to him, Walker stands by “what I had to do,” conflating Matias with Lemar’s actual killer. Mistaking the talk-down for a power grab, Walker spoils for a fight, and it is a pretty brutal one, where at different times he looks poised to slay either of his opponents with his shield,… yet both times is (barely) stopped. Bucky is KO’d at one point, and Sam has a wing ripped off, but in the end, Sam is able to use the force of his jetpack to wrest the shield free from NuCap’s hands. Bucky picks up the shield, then lobs it at Sam with more than a bit of lingering disapproval at what led them to all this in the first place.

Apparently found or having surrendered, Walker is next seen in his dress uniform, being read for filth by a congressional committee. No longer allowed to act as a representative of his country, he is stripped of his Captain America title and handed an other-than-honorable discharge from the Army; it was only his record with the military that spared him a court martial. After being decommissioned (and as detailed here), Walker is approached outside the chamber by Contessa Valentina Allegra de Fontaine (played by eight-time Emmy winner Julia Louis-Dreyfus), who supports his offing of the Flag Smasher as well as his taking of the Super Soldier serum, which has made him “very, very valuable” to certain people. Leaving behind a blank business card, “Val” strongly advises him to pick up the phone when she comes calling.

Laying low, Karli and the remaining Flag Smashers resurface to discover that their camp had been raided, its occupants detained. Mourning Matias, Mama Donya and the countless others lost amidst their cause, Karli declares “It’s time” to forge ahead with their endgame, whatever it may be. 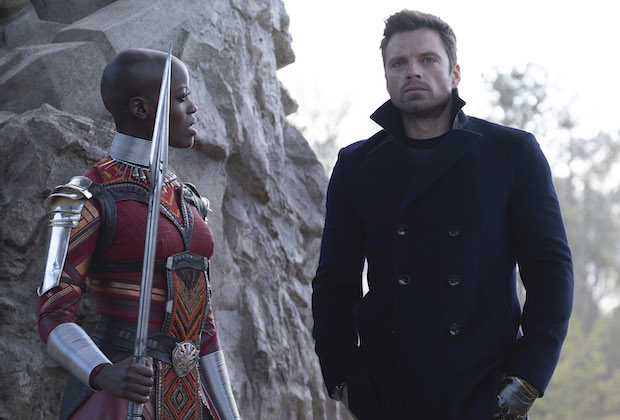 After splitting away from Sam, Bucky tracks down Zemo at the Sokovian memorial referenced in an earlier episode. Zemo notes that Karli has been “radicalized beyond salvation,” and that Bucky as a trained killer knows what needs to be done. Bucky maintains that they will handle Karli their “own way,” and after faking out Zemo by pulling the trigger on an empty gun aimed at his head, he hands the baron over to the Dora Milaje, who plan to drop him off at The Raft. Before leaving, Ayo advises the White Wolf to steer clear of Wakanda for a spell, given his role in freeing T’Chaka’s killer. Bucky understands, yet has one last favor to ask of the Wakandans….

Sam, meanwhile, has gone to see Isaiah Bradley, and the Black Super Soldier details what “went wrong” during the war. “I used to be like you, until I opened my eyes,” he tells Sam. “I saw the Red Tails (aka Tuskegee Airmen), the famous 332, fighting for our country… only to come home and find crosses burning on their lawn.” When Sam suggests that Isaiah could have gone on to become a new Captain America, Bradley makes clear that after blonde-and-blue Steve Rogers, America would never give up chasing “the great white hope.” Isaiah then reveals how his wife had been told he was dead, when in reality, as the sole survivor of a handful of Black soldiers given the Super Soldier serum, he was locked away for experimentation — and also to keep him from blowing the whistle on the brass who aimed to blow up the POW camp where his Black brethren were being kept, as a means of destroying evidence. Isaiah, though, saved his brothers from that tragedy. After 30 years of scarring experimentation, Isaiah earned the compassion of a nurse  who faked his death and delivered to him letters from his wife that had been intercepted over the years. “They erased my history… but they’ve been doing that for 500 years,” Isaiah scoffed. And despite Sam’s suggestions, “They will never let a Black man be Captain America. And if they did, no self-respecting Black man would ever want to be.” 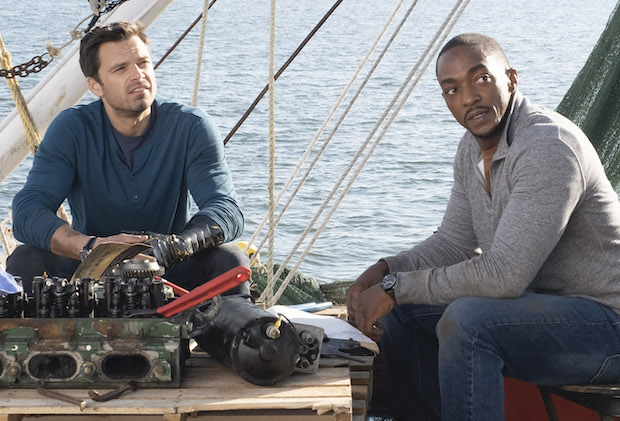 Sam returns home to Louisiana, where he teaches his nephews to help out a bit in restoring the family fishing boat, which, when all is said and done, Sarah doesn’t have the heart to sell. (Besides, a prospective buyer has backed out.) Nonetheless strapped for cash, Sam decides to call in favors from the many locals who owe their mom and dad “something,” and the result of his outreach is a resounding success. What’s more, Bucky shows up at one point to effortlessly lug a heavy motor off of a truck (as well as hand off a high-tech case containing… something). Sam invites Bucky to stay over (as long as he stops flirting with Sarah!), and after Sarah fires them from water pump-fixing duty, Sam gets to training with the shield in his backyard. Sam makes clear that, after his chat with Isaiah, “the legacy of the shield is complicated, to say the least.” To which Bucky says, “When Steve told me what he was planning, neither of us could have understood what it’d feel like for a Black man to be handed the shield” — and he apologizes for putting that on Sam.

Sam gives Bucky some “tough love,” first by saying that he has to stop looking to other people to tell him who hs is. And if he is still having nightmares (and he is), “If you want to climb out of hell, do the work…. You weren’t making amends [with those on his list], you were avenging.” Surely someone on Bucky’s list needs closure, and Sam urges him to do something to provide that. After Bucky promises to be there for Sam if Karli resurfaces, the two haggle a bit over whether they are partners, co-workers, or just “a couple of guys” who knew a guy.

Elsewhere, Walker meets with Lemar’s parents, lying to them about exacting vengeance on his partner’s actual killer, and then privately wincing as they speak of how honored Lemar was to be at his side…. Also, we see Sharon Carter place a call to an angry Batroc (the baddie that Falcon chased in the series opener), promising “I can give you double this time. So what’s it going to be?”

When Sarah delights Sam with the news that she won’t sell the family boat, she goes on to acknowledge that she never truly felt he was running away from his responsibilities at home. “There’s a fight out there and a fight here, and you took them both on,” she says. She questions his decision to let Isaiah Bradley tell him what to think, arguing, “What was the point of all that pain and suffering if you aren’t willing to stand up and keep fighting?” A training montage commences, as Sam both gets a handle for wielding the shield as well as further fine-tunes his physique and agility. Later, Sam opens the case that Bucky delivered from his friends in Wakanda, and … we don’t get to see what was inside.

Karli, meanwhile, reports to Dovich et al that she got them some help to even the odds — from Batroc, who then walks up to them. Dovich questions the decision to ally with criminals now, but Karli counters that the governments sees them as that anyway. Batroc will help them stop the GRC vote on the Patch Act (to return refugees to their native homes), and he will get a chance to kill the Falcon. And as the camera pulls back, we realize they are in New York City’s Bryant Park (right across the street from TVLine!). Not longer after, the GRC convenes to debate/hold the vote, but seemingly with the complicity of some security guards, the lights go out, and mayhem seems imminent.

But wait, there is more! Because in a mid-credits bonus scene, we see that John Walker is not quite down for the count, but instead is fashioning for himself some sort of knockoff shield…. Good luck with that, man!

What did you think of “Truth,” Sharon’s alliance, and the mystery case?