This week on The Falcon and the Winter Soldier, an enigmatic character from the Marvel comics — one that reportedly was to debut in the delayed Black Widow movie — was given a face. And a very familiar one, at that.

About a third of the way into the Disney+ series’ April 16 episode, after the disgraced new Captain America had been read for filth by a senatorial committee, John Walker and his wife Olivia were approached by a striking brunette. Played by eight-time Emmy winner Julia Louis-Dreyfus, the woman introduced herself as Contessa Valentina Allegra de Fontaine — though you can just call her “Val” (but… don’t).

Sitting down next to John, Val confided in the fallen superhero, “I would have killed the bastard, too,” referring to his very brutal, very public bludgeoning of Flag Smasher Matias. Alas, “The guys in ties have a thing to protect,” she says with a nod to the senators who just stripped John of his job and handed the Army vet an other-than-honorable discharge.

“You did the right thing” in taking the Super Soldier serum, Val whispers, and doing that has made Walker “very, very valuable to certain people.” In fact, she says that supe-ing up was the second-smartest decision he ever made (tied with marrying his “firecracker” of a wife). But his best decision will be picking up the phone when the contessa calls him. And after handing Olivia her (blank) business card, Contessa Valentina Allegra de Fontaine slipped away. 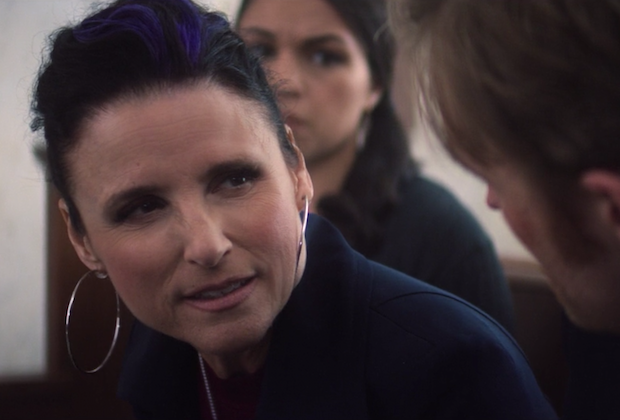 Is Val the series’ oft-mentioned, yet-to-be-seen Power Broker? It would seem so, though that was never made 100-percent clear. But in the Marvel comics, Contessa Valentina Allegra de Fontaine is one alter ego of Madame Hydra, and among other things she was at one point a love interest for S.H.I.E.L.D. boss Nick Fury. She also at one point headed up S.H.I.E.L.D.’s Femme Force female assault team, alongside… Sharon Carter.

According to Vanity Fair, JLD is slated to appear as the Contessa in the Black Widow origin movie starring Scarlett Johansson, which had its release date pushed back multiple times and now will hit Disney+ and theaters on July 9. The fact that she instead debuted on the small screen is one ripple effect of the date shuffling for movies and TV series alike.

“In a year, after you’ve seen all the shows and movies that we’ve made, there are a few super-tiny things that, if people are interested, I could point to that shifted,” Marvel Studios chief Kevin Feige told TVLine in January. “I can only even think of one right now, and it’s super minor.”

Our complete recap of the episode “Truth” will post later this morning. Until then, weigh in on Dreyfus’ debut!