Younger fans have been waiting 19 months for Liza to answer Charles’ proposal, and with the first four episode of the show’s seventh (and final!) season dropping on Paramount+ and Hulu this Thursday, their wait is finally over. Sort of.

“Liza does not immediately answer Charles,” Sutton Foster admits to TVLine, adding, “They’re in love with one another, but they might want different things. Liza and Charles have different ideas about marriage, and that’s going to cause some complications.”

Adds Peter Hermann, “It’s always going to be complicated. These are two human beings figuring out their roles in each other’s lives, and how they’re going to negotiate that. There’s an endless amount of pull towards each other, but there is also much keeping them apart. That hasn’t changed. We watch them navigate that, sometimes elegantly and sometimes very badly.”

While Liza and Charles figure out where they stand, Younger‘s final season finds new parents Josh and Clare (Bridgerton‘s Phoebe Dynevor) in a much more stable (albeit considerably less romantic) situation.

“Josh and Clare have a really cool thing going,” Nico Tortorella says of co-parenting baby Gemma. “The easy way to tell that story on television would be to make it difficult, packing it with drama and making it hard for both of these characters. But that never happens with Josh and Clare. It’s just been really easy. Maybe that has to do with Phoebe’s schedule — she’s a little busier than when we started this show — but it’s an important relationship to show on television, for sure.” 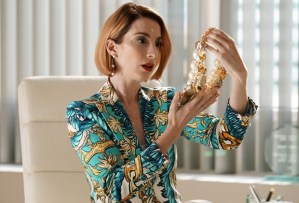 On the business side of things, we’ll be seeing a lot less of Diana at Empirical this season — as TVLine previously reported, Miriam Shor and Charles Michael Davis (aka Zane) are no longer series regulars — but neither her office nor her iconic collection of statement jewelry will go unused.

“Lauren may or may not have been asked to be the guardian of Diana’s office, and she’s just trying to live up to that ask,” Molly Bernard teases. “They are giant-ass Manolos to fill. A lot of weight lifting and neck training went into preparing for this.”

And lest you think the coronavirus pandemic kept Younger from mixing its signature concoction of drama and hijinx, series creator Darren Star insists, “We were able to do the show exactly how we wanted to, which is surprising. I was surprised by how much we were able to accomplish, production-wise, even though we had jump through a lot of hoops to do it. There was nothing we had to sacrifice in terms of what we were able to shoot for the pandemic. It just took a long time.”

Regardless of how the final season plays out, however, Foster assures fans that they won’t be disappointed in the end.

Then again, maybe it’s too soon to be throwing words like “ending” around. “With the future of television, who knows what’s going to happen?” Tortorella reminds us. “Movies, a reboot, a miniseries — the world of television is our oyster.” On the possibility of a 10-year reunion down the line, they say, “F–k 10 years, give me five. I’m good to go.”

Hit PLAY on our interview with the cast below to find out what everyone stole (or “shopped”) from set, then drop a comment with your hopes for Younger‘s final season.