Who do I have to talk to in order to have The Masked Singer judge Nicole Scherzinger sing in every episode?

The Pussycat Doll croons a few bars of “That’s What Friends Are For” to commemorate Nick Cannon’s return in this week’s installment, and it’s glorious. (Ken Jeong’s part of the song? Less so.) And the performances weren’t too shabby, either! Let’s recap them, cool?

RUSSIAN DOLLS | At first, it looked like four of the Russian Dolls were going to serenade us this week. But when they actually got down to singing Jason Derulo’s “Want to Want Me,” it was just three of the Dolls laying down sweet harmonies and impeccable falsettos. Clues included: the Lincoln Memorial; a bowl of fruit (oranges?); a tour bus; a snow globe with Snow Owls in it; references to performing in parking lots, softball fields and the White House; and “What goes around comes around.” (My guess: “MMMBop” singers Hanson.) 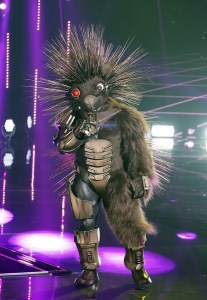 ROBOPINE | Robopine unleashed both his vocal and choreography swagger in his perforamnce of Roberta Flack’s “Killing Me Softly,” making his performance one of the most satisfying of the night. Clues included: ruins, references to being on “a quest for a certain gold relic,” 6, MM or MW, a golden cup with $1 in it and “AKA.” (My guess: The Fast and the Furious‘ Tyrese Gibson.)

SEASHELL | Speaking of satisfying numbers, what about Seashell’s “Tell Me Something Good?” The Rufus feat. Chaka Khan jam was the perfect song selection for whoever is inside the costume (but I’m pretty sure I know). Clues included: references to wearing “a variety of shoes” during her career, a wedding cake, strength supplements and Motown, which “brought my family together.” (My guess: Sister, Sister‘s Tamera Mowry. Or is it Tia? No, I think it’s Tamera. Probably.) 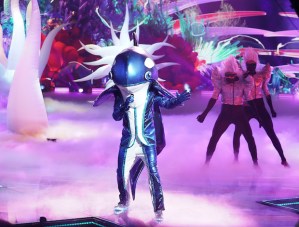 ORCA | The killer whale’s clue package and performance of Poison’s “Every Rose Has Its Thorn” was all about his father, who was his hero and who died after Orca’s children were born. Clues included: Swedish fish, a $3 bill, a reference to his 10-year-old twins and “Purrrr” — which apparently contains three clues. (My guess: Sugar Ray lead singer Mark McGrath.)

YETI | The season’s final wild card made his appearance near the end of the episode, offering up a very athletic, very enjoyable and only slightly outta breath performance of New Edition’s “If It Isn’t Love.” Clues included: firewood, references to being raised by a “village of warrior women,” berries-and-jam sandwich, three cupcakes, a heart and Aphrodite — because “Yeti is all about love, love, love.” (My guess: “Sexy Can I” singer Ray J.)

CLUEDLE-DOO | The big rooster offered the following clues, which in a roundabout way seemed to be about him: Robin Thicke is a “hopeless romantic, Jenny McCarthy Wahlberg “loves to talk,” Scherzinger is “Friends with benefit” and Jeong’s clue is “We’ve both changed.” (My guess: Community grad and frequent Masked Singer guest judge Joel McHale.)

THE UNMASKING | Orca was unmasked, and he was revealed to be McGrath.

Now it’s your turn. What did you think of the episode? What are your latest guesses? Watch Orca’s unmasking below, then hit the comments and let us know!