Big Shot‘s John Stamos is the first to admit that he’s never been particularly interested in sports. And he knows his indifference makes his turn as a hot-headed basketball coach in the David E. Kelley-produced dramedy a bit of a head scratcher.

“I’m the opposite of a sports person,” Stamos tells TVLine. When it comes to shooting hoops, he says, “I don’t get it. I don’t know about it. I didn’t play. I was a band geek. I still am a band geek.”

But Stamos knew he had something special on his hands when he received the script for Big Shot. Premiering Friday and unspooling over 10 weeks, the Disney+ series centers on Stamos’ Marvyn Korn, a disgraced coach who gets sacked by the NCAA for tossing a chair at a referee. Soon after, Korn accepts a job at the Westbrook School for Girls, where he attempts to steer the once-undefeated Sirens back towards their former glory.

Below, the Fuller House vet explains what initially drew him to the project, the potential he saw in Coach Korn, and his hopes for yet another revival — stat! 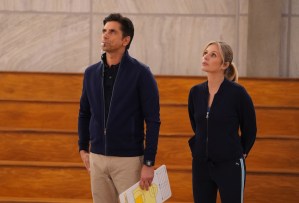 TVLINE | When you got the pitch for Big Shot, what about it intrigued you? Was it the premise? The character? The chance to work with David E. Kelley?
David E. Kelley first. I got a call from my managers and they said you’re going to get an offer for the new David E. Kelley show. I couldn’t believe it. I mean, I love David, and I said, “Am I playing a lawyer? Am I playing [someone] on Big Little Lies?” They said, “No, it’s about basketball,” and I was like, “Oh no.”

TVLINE | If not for the love of the game, why did you sign on for a show about basketball?
I saw a show about a guy who was very polarizing, and stuck in his way, and did things his way. In his mind, to have to coach high school girls is the worst thing in the world. Turns out it isn’t, and for him to come in and just let go of those [preconceptions] and connect with these girls, that’s a show that I wanted to be a part of. 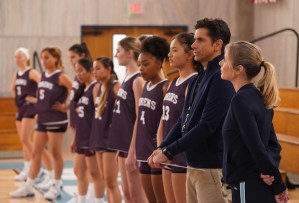 TVLINE | When we first meet Coach Korn, he’s a bit rough around the edges, and struggles to connect with the young women who play for the Westbrook Sirens. How does the character begin to evolve?
You know, he changes fairly fast. I mean, I don’t think you want to watch a whole 10 episodes of some jerk who’s not listening, right? Not learning? So, he gets better.

TVLINE | A big part of that change, I would argue, stems from his bond with his teenage daughter Emma (played by Sophia Mitri Schloss), who comes to live with him. How would you describe their relationship?
Well, he doesn’t [have much of a relationship with her in the beginning], and that’s the beauty [of it]. Once he gets thrown into having to be a full-time father to a 16-year-old girl, which he never was, he says to Emma, “Look, I did it for you,” and she says, “No, you didn’t. You did it for you…” What happens is that Marvyn learns what it means to be a father. At the same time, I’m a new father [in real life]; my son is 2 years old. Obviously, they’re different ages, but at the end of the 10 episodes, Marvyn says, “I get it now. It’s about sacrifice,” you know? Putting aside what you want for the good of your child. At the end of the day, you don’t want a trophy and you don’t get a [championship] ring. What you do get if you do it right is a kid who is more loving, more caring… a better person, and an echo of you. That rings so true every day with my kid… It becomes a very special relationship.

TVLINE | Early episodes indicate that Marvyn has a complicated relationship with his own father. How do you think that relationship shaped the man we first see throwing chairs at referees?
As soon as [the Sirens’ star player] Louise (played by Nell Verlaque) starts talking about having to be a certain thing for her father — having to, you know, not let him down and make her father proud — David E. Kelley connects it to [Marvyn’s] father. I make this great speech about my dad, and [how he repeatedly] called me an embarrassment. You remember those things, and in an effort to not be an embarrassment, he got more embarrassing, throwing chairs and fits… The good thing is that he doesn’t want to be his father [with] Emma. He wants to break the chain, and I think that’s part of his journey. 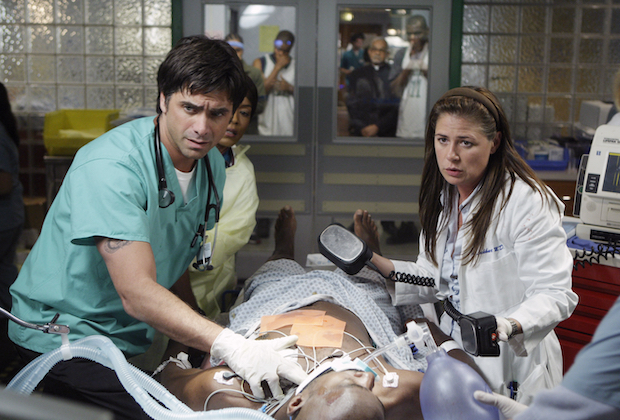 TVLINE | Having recently rewatched ER, I was pleased to see you in a dramatic role again. Was that also part of the appeal, coming off of Fuller House?
[ER] was a perfect show, and up until now, it was my favorite job. I really like this job, but that was, boy, that was a special show. I hope people rediscover it like you did. It hasn’t happened yet, you know?

TVLINE | You recently got done with Fuller House. If you got the call from ER executive producer John Wells, would you be on board for another revival?
Oh yes, I’d love to… Leave Full House alone, people! Go check out ER!

[Editor’s note: This interview was conducted prior to Tuesday’s announcement that the original cast of ER, which did not include Stamos, would reunite later this month. For more information, click here.]